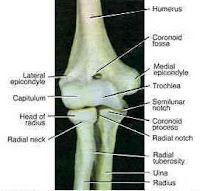 I’ve always known I can’t successfully do two things at the same time and Monday I acquired a broken bone to prove it---the head of the radius in my elbow. Note to self: trying to hook a water bottle on to a fanny pack while walking causes you to trip on you own feet, fall down and fracture bones. On the good side, I didn’t hurt the elbow that I broke years ago and is screwed back together in three places. On the bad side, the break is on my dominant arm so writing, eating and brushing my teeth have all been adventures in patience. Typing one-handled is coming along good but I discovered Windows 7 on my laptop has voice recognition so if I get to a point where I want to challenge my aging brain to learn something new, it’s there for the taking. If nothing else, life teaches the importance of always having a Plan B because you never know when you’ll need one.

When my husband first had his stroke and was learning how to live in a one-handed world I taught myself how to do many things one-handed so I could then teach him by example. I even have a book on the topic, but cooking one-handed is something brand new to me. The first night I tried to fix dinner one-handed I cooked a large beet in the microwave and trying to cut it up caused my kitchen to look like a crime scene. Even the floor was red with beet juice skid marks. The dog got to the fallen beet half before I did and he managed to track red paw prints as he escaped to the living room to eat it. It was a juicy sucker and Levi looked good with red lips. Thankfully that caused me to remember the high sided cutting board and rocking knife made especially for one-handed cooks that was storage in the garage. (It was a gift someone gave to my husband who didn’t know that in his entire life Don never did anything more complicated in the kitchen than make coffee.) So now I have no reason to get frustrated cutting stuff up. But I’m worried I’ll impale myself on the deadly looking spikes in the middle of the cutting board that holds your food still. What would life be like if worry-warts like me didn’t have something to worry about?

At one the three medical facilities my broken bone took me to this week someone called me “sweetie.” Getting called sweetie struck me the same way it did the first time I got called “madam” instead of “miss”---like I’d just crossed over the border into the Land of Irrelevance with no return ticket in hand. I don’t know what came over me, maybe pain, but I stopped in my tracks, stepped back to her window and said, “Now, you don’t know if I’m sweet. I could be the crankiest old lady you’ve ever met.” She laughed (along with her co-worker) and replied, “I took a chance.” I had no come back for that so I laughed, too, and went on my way. But I do worry if someday I’ll bitch-slap someone for just trying to simplify her life by calling everyone over a certain age the same thing.

I saw my orthopedic doctor on Friday. He did both of my knee replacements and I love the guy. He said in a week when the swelling goes down in my wrist and elbow---thanks to his handy packet of Prednisone---I can try writing, typing and eating with my dominant hand again. He took away the rigid splint formed to my arm at the urgent care center that went from my fingertips to my armpit and he’s not making me have a permanent cast to replace it so long as I promise not to pick up anything heavier than a fork and I keep my arm in a sling when I’m not sitting or sleeping. I would have signed that pledge in blood if he’d asked me! He’s also setting me up for testing that could lead to me to get some treatments to strengthen my bones. Hallelujah! Maybe I won’t end up in nursing home someday with a broken hip and an aid that calls me “sweetie” or “dear” or some other bogus endearment that only means she does know my name. Life is good again…or it will be in 4 to 6 weeks when I can ditch the sling. In the meantime it could have been so much worse and I am grateful to the gods of good fortune that my streak of bad luck could actual end with something good---bones of steel! Wouldn’t that be too cool for words! ©
Posted by Misadventures of Widowhood at 5:31 PM