What does a walnut napkin holder cut in the shape of our state, a flip book of plastic covered queue cards and a set of glasses etched with eagles on the front have in common? They all made me cry this week. Damn it! I thought I was past the weepy widow stage, that stage where everything you see brings a bittersweet memory. The napkin holder was something I hated since I first saw it at a Christmas craft show last year, but Don’s friend was selling them and no way could I tell Don in front of the guy that, “No, we don’t need it, I don’t want it. I don’t like. Put it back!” But that was how I felt at the time. The glasses were something he won at a fund raiser auction we’d gone to and while Don kept bidding on them I kept resisting the urge to grab the bid paddle out of his hand. Don loved going to auctions before his stroke but country auctions aren’t very wheelchair friendly so he’d had few opportunities since. He was having fun bidding on the glasses but I was thinking “No, we don’t need them. I don’t want them. I don’t like them. Put the paddle down!” This week, the glasses and napkin holder went to the Salvation Army box but not without a lot of guilt packed in around them.

The flip book of queue cards was another story. I couldn’t get rid of that. I found in a box of speech class homework and that box represented six years of hard work---so many hours of exercises and practice that involved us both. I managed to throw out everything in the box but the flip book. It sits in the garage waiting for the day when I might bite the bullet and make it disappear in the trash container. But I was proud of myself for throwing out what I did even though I cried like crazy over sorting through that box. The worse part, though, was a few days later I was in the basement and I noticed another box labeled: speech class homework I hope we never need again. Damn it! We don’t need it anymore. I don't like what it reminds me of and I don't want it anymore...but it still sits on the shelf. I had shed enough tears for one week.

In a few days it will be eight months since Don died. I have accomplished a lot in those months but every so often it seems like it was only yesterday that he was here laughing at one of my silly antics. Other spouses to stroke survivors with severe language disorders will understand what I mean when I say that after the stroke I became the Entertainer-in-Chief. You end up talking more because your spouse can’t talk. You end up projecting and guessing what your partner wants to say. One of my favorite memories from recent years is of a time when I had an argument with myself---me taking both Don’s side and my side of an issue. (When you know someone as well as I knew Don you know exactly how they think.) I was seriously getting wound up debating with myself when Don burst out laughing. And that was the end of “our” argument. I had won whatever "we" were disagreeing about. God, I miss him! © 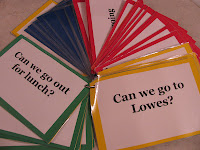 Posted by Misadventures of Widowhood at 11:17 PM