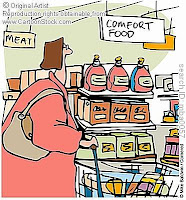 In one of my very first blog entries I wrote: “Oh crap, widowhood is going to be fattening!” And I was right. At the doctor’s office today he pronounced me six pounds tubbier than I was six months ago at my last visit. He didn’t, of course, use the word ‘tubby’---he’s a nice guy---but my weight gain prompted a long “bad girl” discussion that ended with me having to sign a pledge to add 30 minutes of exercise to my day, journal my food intake and e-mail him an accountability report once a month. Tools for losing weight. Whoop de doo!

The report thing was my own fault. He wanted me to come back to the office in three months for a follow up but I pulled the Old People Card and said I wouldn’t do that in the winter months for anything less than a heart attack. “Spring will have to do,” I said, thinking I had out-smarted a guy who soaking wet couldn’t weigh more than a bale of hay. I didn’t count on him standing his ground and pulling the accountability pledge out of his bag of tricks to use on stubborn patients who won’t do follow up appointments if it’s snowing. He even had his nurse register me for an interactive website where I can view my medical test results, send Mr. Doctor my monthly reports, and ask his nurse questions like, “If I just broke my big toe will I need a cast?” When I send in my first tubby report I’m going to sign it, “from fatty, fatty two by four.” Damn it, it’s going to be a long winter without my comfort foods to keep me warm!

During the “bad girl” discussion I confessed that I’m an emotional eater and the doctor asked, “Is there something special going on in your life that is causing you stress?” If looks could kill, he’d be dead. I had a hard time not calling him an idiot for not remembering that---DUH!---my husband died nine months ago! But deep down inside I wondered if 10 years from now I won’t still be using the same excuse if I don’t get my bad girl eating binges under control. So I put my strong widow lady face in place and as sweet as marshmallows in cocoa I explained what I’ve been doing since Don died.

Near the end of the visit the doctor left the room to get me a flu shot injection and he came back with a nurse in tow I hadn’t seen since before Don passed away. She’d just heard the news and was upset that she didn’t know before. He was her favorite patient, she said and “I just loved Don to death.” Oh okay. It’s a common expression and at first it went right over my head but when it hit me I had to concentrate on stopping the full blown pucker up and cry that was forming in my head. Meanwhile, the nurse realized what she said about loving Don to death and like a slow motion video you could see a pucker up and cry washing over her face. The next thing you know we were both crying and Mr. Skinny Ass Doctor was standing in between us with one arm awkwardly around each of us. And for this surreal hug fest I wondered how much extra Medicare would get billed.

On the way home I had the Prime Country station playing on the radio and Dan Seals was singing One Friend:

'Cause when we were together,
It made the dream come true.
If I had only one friend left,
I'd want it to be you.
Someone who understands me,
And knows me inside out….

Well, isn’t that just like a country singer, I thought, playing my emotions like a violin and making me wish I could write like that. Then I pulled over to the side of the road and cried the color right out of my irises. Don was that one friend in my life who knew me inside out and now his spirit is off doing what ever spirits do in the Great Unknown and I’m stuck writing fatty two by four letters in my head. I’d call him an ass-breath for dying and leaving me alone but I’m trying to quit swearing. And Dan Seals? Well let’s just say I’m still mad at him for making me late for dinner. ©
Posted by Misadventures of Widowhood at 6:27 PM