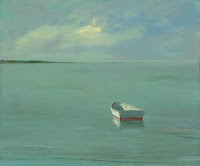 
Sea Child
by Jean R 2013 ©
Am I still adrift in the Sea of Sadness,
Or am I standing on the moonlit shore
Waiting for the tide to change and usher
In a foggy-fingered child of mourning?

With the sounds of earth coming alive
What if on the waves a child did ride
And grow anew with the sun as it climbs,
What should we call this bean of the sea?

This girl with the watery-eyed mother
And father sad at the bottom of time
Do I take her hand or wave good-bye?

Don held my string.
He helped me fly
But times change
and husbands die.
I try time and again
to untangle myself
from tree after tree
and whether or not
I find my way in wind
again remains to be seen.

The rustling leaves of seasons past
Seems to say he won’t be near
For the coming holidays so blue.
He’s riding the winds of yesterday
Caught on the breath of Lady Fall
As she makes hearts as bleak as the
Landscape she hands over to Snow.

Outside, a rabbit sits still in the early light of day
The dog peeks through the mini blinds and bays.
Every day it’s their way of waking up the widow
Before the sun smacks trees out of their shadows.

In the bathroom, the widow answers nature’s call
As the dog curls himself back up into a sleepy ball.
The rabbit, long gone across the neighbor’s lawn
Where soon off will go another four-legged alarm.

She makes her way across the dim, silent house
Past the empty chair that once held her spouse.
And in the murky kitchen light she stands waiting
As hot, steaming liquid spits out a single serving.

One morning the rabbit will sit, the dog will bay
And the weary widow will not wake up that day.
Now, though, she’ll push the fog of loss aside
And go bond with the others running out of time.

Widowhood is a vacuum
sucking tin soldiers off the floor,
swirling them around in a dark void
while other tiny souls still in its path of wrath
struggle to pull its life-line from the wall.
Posted by Misadventures of Widowhood at 2:16 PM