The Law of the Garbage Truck and Other Junk 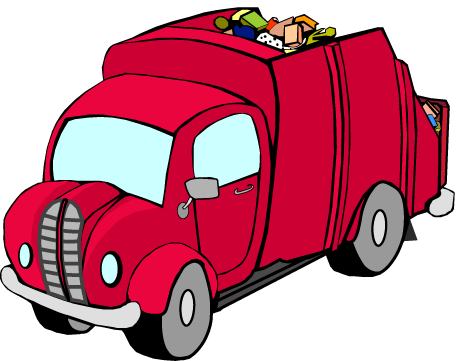 Like everyone with a computer I get my fair share of chain emails. Some are filled with photos, some with humor, and some with rants against (or for) one cause or another. I only forward a faction of these kinds of emails and only to people I think would especially be interested in the topic. But you sure learn a lot of about the friends and family who send them---what they value, what they find humorous or beautiful, etc. How gullible a few are who pass around emails that have been debunked as false and misleading a long time ago.

Today I got one of those chain emails after spending the morning on the Wild West of political sites where you can debate with not only Democrats, Republicans, Libertarians and Tea Party people but also with KKK members, secessionists, hard-core NRA members, conspiracy theorists and survivalists claiming to be living off the grid. And did I mention crazy people? It truly is a site of fast-moving and diverse opinions filled with nasty name calling and delusional thought. But I consider my time spent there akin to brain exercises with a side order of research and debate practice thrown in. For a long time after Don died I didn’t have the stomach for the place but the mass murders in California this past Holiday weekend drew me back in big time. The disgusting lack of empathy for one of the victim’s father, who showed the world his raw grief on the media, was mind boggling and I couldn’t leave those forum threads alone.

But the world---at least mine---has a way of finding balance when it’s needed the most thus enters the chain email I got this afternoon. It’s titled The Law of the Garbage Truck. I have since learned there is a book by that same name written by David J. Pollay and after reading the reviews, it's obvious the book gave birth to the chain email. Whether David wrote the original email, or someone else, the story in it is his. The book has been translated into 50 languages so I have no doubt this email has probably been around the world a few time. In case you didn't get a copy, here it is:

“One day I hopped in a taxi and we took off for the airport. We were driving in the right lane when suddenly a black car jumped out of a parking space right in front of us. My taxi driver slammed on his brakes, skidded, and missed the other car by just inches! The driver of the other car whipped his head around and started yelling at us. My taxi driver just smiled and waved at the guy. And I mean, he was really friendly. So I asked, 'Why did you just do that? This guy almost ruined your car and sent us to the hospital!' This is when my taxi driver taught me what I now call, 'The Law of the Garbage Truck.'

"He explained that many people are like garbage trucks. They run around full of garbage, full of frustration, full of anger, and full of disappointment. As their garbage piles up, they need a place to dump it and sometimes they'll dump it on you. Don't take it personally. Just smile, wave, wish them well, and move on. Don't take their garbage and spread it to other people at work, at home, or on the streets. The bottom line is that successful people do not let garbage trucks take over their day. Life's too short to wake up in the morning with regrets. So ....love the people who treat you right. Pray for the ones who don't. Life is ten percent what you make it and ninety percent how you take it.”

I love that story, maybe because it reminds me of my one of my father’s philosophical thoughts on how to live a happy life. Maybe I like the story because it will help remind me not to take it personal when I’m at the Wild West of websites and I’m being called vile names because I dare have empathy for a grieving father. Not that I do take it personal 90% of the time. But that 10% of the time when I do start getting too invested in a debate thread, I’m going to remember the Law of the Garbage Truck. And if that isn’t enough to keep me in check when I start feeling like I am starting to take it personal I will recite a great line I learned today over at Bella Rum’s blog: “Is this the hill I want to die on?” What could be a more appropriate question to ask myself when it might be time to retreat from the Wild West and come play with my friends in the wonderful world of widow and old people bloggers?  Some wars of words can't be won and sometimes it's better to live to fight another day. ©
Posted by Misadventures of Widowhood at 4:02 PM