The Widow's Dog and her Diet 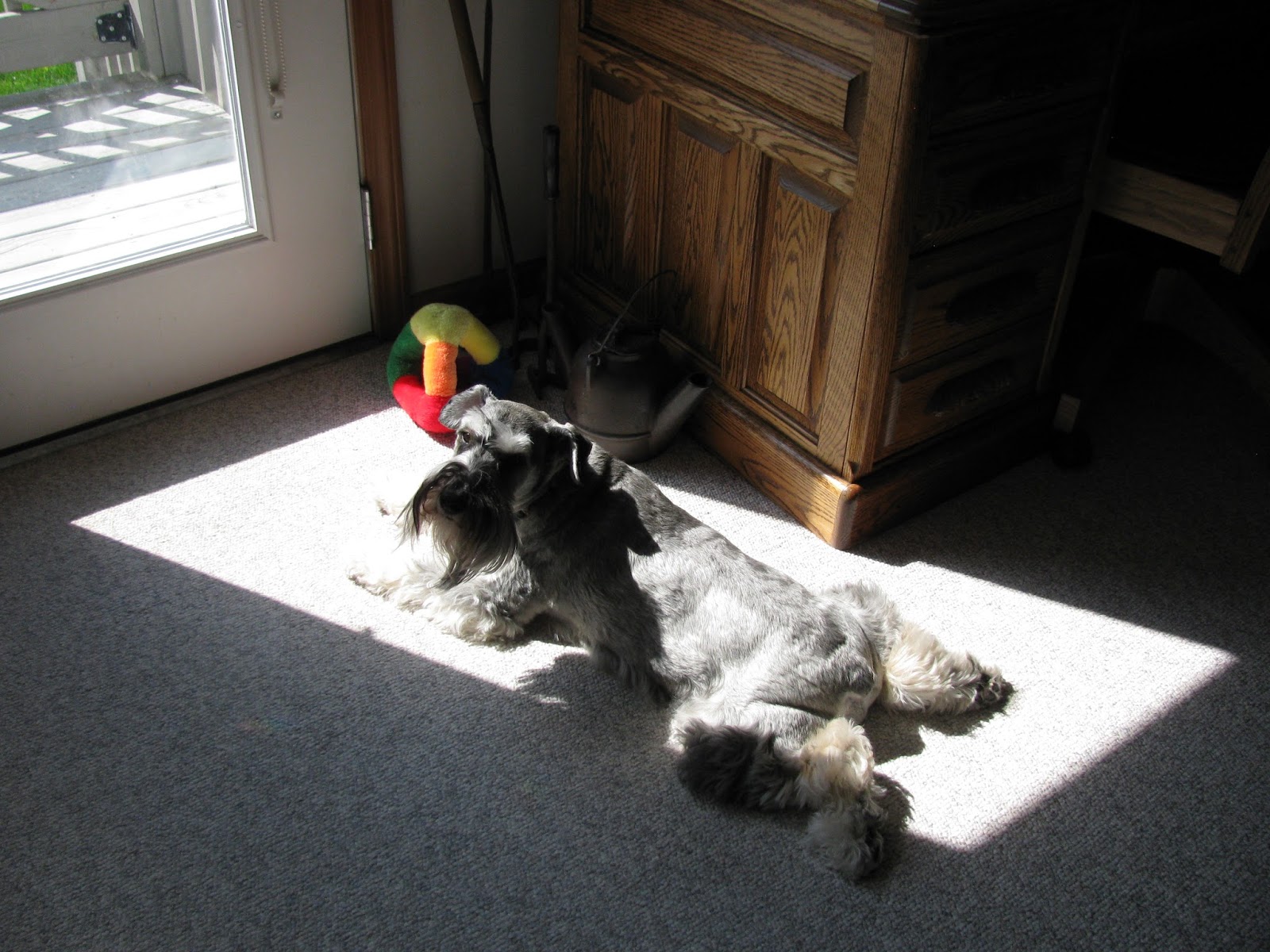 This past week, the dog had been showing an unusual level of interest in something going on underneath a shrub in the front yard.  Today, I found out why. Just before I was ready to walk out the door to go to the dentist, Levi made a quick trip outside to pee and when he came back in he was chewing on something hidden by his long Schnauzer beard. I almost didn’t check it out and I’m so glad I didn’t make that error in judgment. When I pried his jaw open I discovered he’d brought a bird inside!  At least it was dead. The last time I had to pry his jaw open a live toad dropped out. Thankfully, it wasn’t a species that makes dogs sick but I had a heck of a time catching the thing before he disappeared under the couch.

Minus the bird prize that Levi wasn’t happy about giving up, he still had a great day. Going to the dentist I drove by (and over in one case) four dead skunks. Nothing makes Levi happier than inspecting the wheels on my car when I return home from an outing and he actually finds something of interest. The minute I unlock the door coming in from the garage, he’s there to do his walk-around my Malibu. I think he was a detective in a former life. He also checks my pant legs for signs that I’ve been cheating on him with another dog or cat. And in the mornings if I sleep later than he’d like he checks to see if I’m still breathing, his lips pressed against mine in case he has to do mouth-to-mouth resuscitation.  Ohmygod, I’m setting the alarm the rest of the week or he’ll give me his dead bird germs!

I had my first weigh-in at the drink-a-diet-shake-and-talk meeting. Five pounds down in five days. I don’t expect that kind of results to last long but it was a great way to kick off my get-fit project. They have me eating high-protein snacks throughout the day so I feel like I’m getting more calories, now, than before. In addition to the snacking and two shakes a day, you have to have one healthy meal of whatever you like and I can honestly say I’m not missing the sugar fixes and Starbucks I’ve become too dependent on lately. I did a bad thing, though. I was at my doctor’s office yesterday for my biannual appointment and I didn’t run this diet plan past him. Not that he’s the boss of me, and I did check the product out on the internet for safety alerts and I couldn’t find much. He’s big on Weight Watchers and I know it works but all that talk of cooking, recipes and counting points whips me into a cross-eyed frenzy. Weight Watcher math is time consuming and you’re always thinking about food! It’s not unusual for me, though, to go on a diet from Halloween through New Year’s. If nothing more, it keeps me from gaining with all the holiday temptations around.

Also on my agenda this week of old people maintenance obligations to do before winter sets in I had my first annual checkup at the hearing aid center. Yes, the little buggers are still annoying in large places with all the background noises amplified. No, I didn’t drop one of the aids in the toilet or otherwise compromise its functionality. And begrudgingly, I bought the insurance against things like that happening, says the woman whose dog destroyed two of her deceased husband’s hearing aids. Earwax is so tasty, mom! Crunch, crunch.

When the Baby Boomers die off, what are younger people going to do for jobs? Think about all the services and products that it takes to keep us old people up and running. The economy will go down the drain. Housing values will plummet with a glut of unsold grandma houses on the market. City budgets dependent on real estate taxes will suffer. But the solution to those problems that the long-range government planners want---increased immigration of younger people to bring on another baby boom---isn’t flying right now. They say we can’t be a strong force in the world without something driving our economy like the Baby Boomers have done for their entire lives. Others argue a larger military complex/industry can drive commerce better than babies. Babies or building weapons of war, what a choice! It’s all too complicated, isn’t it? Thankfully, I’m from a generation of women who can imitate Scarlett O'Hara and say, “I can't think about that right now. If I do, I'll go crazy. I'll think about that tomorrow.” Well, aren’t I little Miss Sunshine today?

Speaking of sunshine, the dog is laying in his own ray of that warm, wonderful stuff coming in through the dining room door. I wish I could do that, but alas I need to step away from the keyboard and make myself useful. I have a garage to clean, perennials to cut back and three door frames to paint this month so I can check them off my fall to-do list. Gone are the October days when I had rake leaves, take down screens and put storm windows up, or to help get snow plow equipment moved out of storage and I am grateful for that. Not having to work so hard is one of the perks of growing older and I’ll take all of those kind of perks I can get. ©

Posted by Misadventures of Widowhood at 7:48 PM