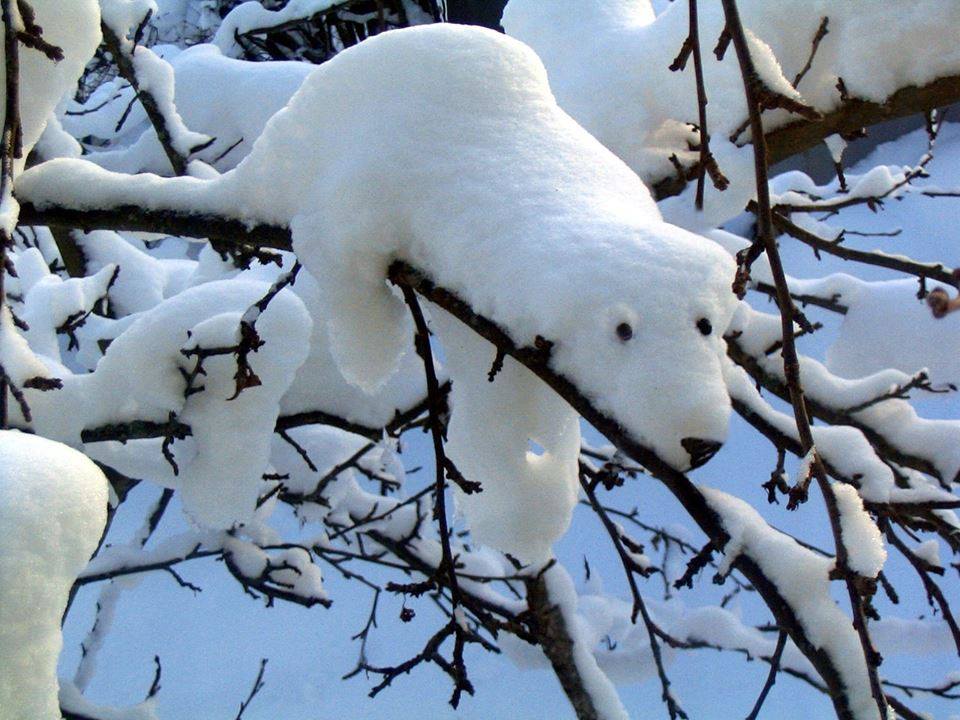 The November storm that has dumped enough snow to bury the dog and then some---a total of 24.6 inches---is still going strong. Many schools are still closed, my street is a mess with no cars in sight and already TV viewers are being advised to shovel their flat roofs so they don’t cave in. Usually, that comes much later in the season.

I'm so cut off from the world I feel like Tom Hanks in the movie, Cast Away, only my ‘Wilson’ is trapped in the nature strip behind the house, covered with snow and probably as lonely as I am. Like Tom’s character in the movie, before the storm I caught myself talking to that ball and I even thought about drawing a face on him before I came to my sense. The powers of nature always push stray balls up my street and around my house until they get caught in the weeds or I pick them up and put them on the deck for Levi’s amusement. Over the years I’ve seen many beach and soccer balls circle my house 5 or 6 times before they get trapped in the back. It’s fascinating how the lay of the landscaping and the wind makes that happen. But I swear if a tornado is ever in the area my house will go up and Levi and I would be wandering around like Dorothy and Toto in the Wizard of Oz.

Old people seem to talk about their bird-feeders a lot so I will follow suit and share the fact that my feeders need a traffic light to keep the chickadees, finches, cardinals, titmouse, mourning doves, blue jays and woodpeckers from fighting over the prime positions. I’ve even had a huge Northern Harrier sitting on my deck rail---probably hunting for mice. What the heck is he still doing in town? He should be on his way to Central America. I’ve gone through an alarming quantity of seed this week. My feeders are just eight feet away from my door and very accessible from my deck and I suspect my neighbors aren’t able to get out to their feeders to resupply them which would explain why so many birds are dining at my house. The bummer part, though, is with my arm sling I’ve had to resort to using smaller feeders because I can’t lift my large feeders up to their hooks using just one arm. I’ve had to refill the little ones twice a day since the storm began.

I made a decision this morning to spend the afternoon reading The Hunger Games. I was probably the last person in the world to see the movie so I figured I might as well be the last person in the world to read the book. Amazon.com make decisions like that too easy to follow through. A quick download and it’s on your Kindle.  I’m not a fan of doomsday or dystopian themes in fiction where civilizations break down into factions of dominate, decadent or exploitative people who rule over the have-nots but on the other hand, I do like to understand pop culture and what makes people world-wide like to read popular stuff like The Hunger Games franchise. Snow days are good for reading if nothing else.

The snow is supposed to end during the coming night. Hopefully that will give the road crews a chance to catch up so I can get out tomorrow. If not, oh well. I won’t starve to death. Mostly what I need to do is replenish the protein mix for the diet I’ve been on. Speaking of which, I’ve lost enough weight so that I’ve had to buy a smaller pair of pants for when I leave the house and this morning I realized my pajamas are so big they are actually a trip hazard. I don’t need any more falls so they will be the first of my clothing to get purged from the closet. If I keep this up, it going to be fun in the spring when I can go shopping for a whole new wardrobe. Just think, my goal was just to get into the smallest of the three sizes already in my closet. ©
Posted by Misadventures of Widowhood at 2:04 PM