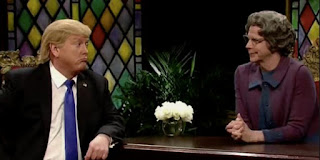 CNN ran a story on Monday with the headline: The 'Trumphaustion' plaguing the GOP. In it their chief national correspondent, John King, said: “A number of veteran GOP members tell friends and associates they are at, or near, a boiling point – ‘Trumphaustion,’ as one put it -- after another week in which efforts to sell their agenda were overwhelmed by Trump's brash moves -- in this case the James Comey firing.” And that was before this latest round of whatever-you-want-to-call-it where our loose-lipped president raised the hackles of both Washington and the Heartland by revealing highly classified information to the Russian foreign minister and their ambassador. Trump has a mouth like Linda Blair…the crap just keeps coming out. When a photo of those two with Trump appeared---taken during their meeting by the Russians and released to their press, then to ours---an angry White House spokesperson said, “We were tricked! They lied! We did not anticipate that the photos would ever be used.” I’m starting a support group for people suffering from Trumphaustion. We’ll find a litter of puppies or kittens to hold and play meditation tapes while we suck on Chocolate Tootsie Pops. Goodness gracious, can we really stay sane with this head spinning, human drama queen machine in the White House?

That was Sunday. Monday I had lunch after The Gathering with my posse of new friends plus another woman new to the group. We talked---or I should say we laughed for nearly two hours about silly things like super-big butts and buying bras and the new lady gave a scathing monologue about young people and sex. According to her, they all have a check list of sexual things to do and they don’t care who they do them with or where. The way she pursed her lips and poo-pooed the morals of everyone under thirty-five reminded me of Dana Carvey’s church Lady character only this was no comedy act on her part. I thought I’d bust a gut laughing. She looked like she thought she could get a venereal disease just talking about the subject. Then the group gave me a crash course on how to shop on QVC which I doubt I’ll ever do but it was interesting how enamored two of the ladies were with shopping via their television sets. I must admit they were both better dressed than I was. I was wearing a burgundy blouse that’s much older than Levi my dog who turned nine last January. I can’t help it, I love that blouse and I refuse to donate it to Goodwill when it’s still in great condition and it fits in the loose and comfortable way I like.

Tuesday I had another one-on-one session with my personal trainer. Only two more sessions to go before I have to decide if I’m going to buy another block of sessions. I’ve been going to the YMCA three times a week for two hours each time since early February and guess which parts of my body are getting smaller---my wrists and my ankles! I’ve lost some in other places, too, but not enough that the smaller clothes in my closet are calling me down to their end of the rack. I’m almost there but ‘close’ only counts in throwing horseshoes and grenades, as baseball player Frank Robinson used to say. My trainer is suggesting if cost is factor that we could meet once a month, stretching the sessions out. She’s concerned that I’ll get bored and quit coming without the accountability. Duh, it’s going to happen sooner or later whether I set up for more sessions or not. I’m more concerned that I'll be free to change to another gym where my health insurance will cover the monthly fees. $55 a month plus the cost of the trainer at the Y is nothing to sneeze at. The other place is near-by, too, but it’s teeny-tiny in size and what they offer in the way of equipment. I checked it out when I first learned about the deal, but at the time I thought I’d be using the Y pool.

I forgot to mention above when I talked about The Gathering that there were two newbies---a man and a woman who both lost their spouses seven/eight months ago. They go to the same church and came to the meeting together. I’m taking bets that they’ll be dating before summer is over. Heck, they already are but they just don’t know it yet. In his introduction he said they are both going through all the same things so they have a lot in common. No kidding. There was another new guy at The Gathering, too, who refused to tell the group his name. I’m guessing he feared all the widows in the room would track him down and start dropping casseroles off at his front door. Who goes to a group that's advertised as a place for people looking for friends and refuses to give their name during the round-the-table introductions? Mysteries like this drive me crazy and I was glad he didn’t join us for lunch afterward. “Hey you with the set a balls between your legs, will you pass the pepper please?”©