A Dichotomy of Epic Proportions 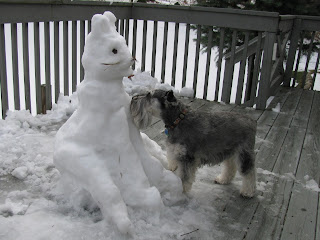 The concept of living in the moment has many benefits for health and happiness but I’ve never been able to sustain the activity for very long. A day or two at a time here and there at the most…unless I’m under a lot of stress like after my husband’s stroke. Then, I lived in the moment for months on end by intentionally concentrating on what I was doing, whether it was chopping carrots or shoveling snow. With the latter, I’d note the way my face is entirely covered over with a scarf and hat with only a narrow strip in between for my eyes and sometimes the hat slides down so I can’t see at all. I’d focus on using my leg muscles and not those in my back when I throw snow off to the side. I’d pay attention to my heart rate so I won’t power through when I should be taking a break. But even when the living-in-the-moment technique is applied to snow shoveling---which is the smart thing to do for your health---my mind wanders and I obsess about building a snowman once more before I die.

Growing up I spent a lot of time outside in the winter building snow forts and snowmen, ice skating, sledding and tobogganing, even ice fishing with my dad. In my twenties I took up downhill skiing and in my thirties that gave way to snowmobiling every chance we got. Nothing was better for living in the moment than parking our Skidoo on a hill top with a panoramic view of a snowy, rural landscape under a midnight moon. We’d turn off the snowmobile, pull out the thermos and enjoy the silence of the night. Michigan, even back then, has great trails for people who love winter. Don and I even tried cross-country skiing but it was a short-lived interest. While it’s a wonderful way to enjoy the great outdoors it was also exhausting!

In my forties and fifties I was outside during the worst weather Michigan can throw at its residence because my husband had the bright idea that if I learned how to plow snow I’d get over my fear of winter driving. Not to brag but I was very good at it, so good that Don started hiring and trained more women to plow. He said women didn’t waste time trying to re-invent the wheel like the guys often did. At first glance that could sound like a backhanded insult to women but it wasn’t. On mall parking lots if we didn’t stick with the established plow patterns it could screw things up for the adjoining sections or cause other problems I won’t take time to explain. The bottom line was women listened, guys didn’t.

Now, I’m an inside chick---or more precisely an old hen who is still afraid of winter driving. But I would be very brave again if I was the only person on the road and I still had a four-wheel drive pickup truck with an orange flasher on top and a C-B radio to call my husband if I got stuck. I could do controlled, purposeful skids with the best of them. Wanna see a 180 turn on an icy parking lot, I’m your man. My truck had a fifty gallon gas tank on the back, so in addition to plowing snow I was the mobile service station. I don’t miss those nights of standing out in the cold, pumping gas or holding a flashlight while Don was flat on his back in the snow fixing a hydraulic hose on a plow. Being the first female plowers in the city did have its perks. The guys had to fix their own broken lines, but the girls had Don to do our dirty work.

That was then. Back to now. So what’s stopping me from building a snowman? I’m afraid if the neighbors see out in the cold that long, they’ll think I don’t need them to run their snow blower across my front sidewalk. I really do need their generosity. Even with their help, I still have to shovel across the front of my two-stall garage where my plow service can’t reach and from my front door down 25 feet to where the walk connects to the driveway. I also shovel my dog’s deck and yard plus I make sure my two back doors aren’t blocked by snow in case I need to escape an axe murderer in the dead of night. Shoveling takes a lot of my time! Still, I debate the idea of building a snowman on my back deck where no one can see me and if I do I’m building a cat snowman that looks in the window to torment my dog.

Christmas time and fun in the snow have always gone together like a right glove with its left. After I out-grew some wintertime activities I still spent the next fifteen years being the aunt who got to take the kids outside to play in the snow while my mom and sister-in-law cleaned up after Christmas dinner. Where does the time go? Those kids are now all grandparents. Looking back at my best wintertime memories is like looking at an iconic village in a snow globe. From the distance of time, the winters of yesterday were sweet and carefree and it was so easy to live in the moment back then. Now, I have too many memories of the past to enjoy and not enough future to build new dreams around to maintain living in the moment for long. The bitter-sweetness of aging is a dichotomy of epic proportions.  ©