From Holiday Guilt and Presidential Powers to Full-out Gratitude 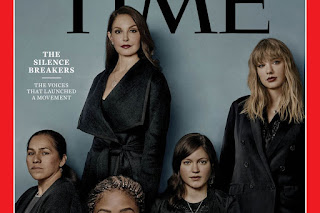 With the holiday spirit hanging in the air---the decorations lighting up the neighborhood nights, the Christmas music and good cheer heard in the stores, the parties lined up on the calendar---it feels like I’m living in an twilight zone. I swing from being genuinely happy in the ho-ho-ho season to feeling guilty about that. Who am I that I get to be light-hearted when so many people in Southern California are losing their homes and livelihoods to raging fires that are destroying thousands-upon-thousands of acres? Who am I that I get to be in my warm, well-lite home when 66% of the people in Puerto Rico are still without power since Hurricane Maria destroyed the island in September?

FEMA is closing operations in our southern states but their workers aren’t getting a much needed break. They’re headed out to California and you can’t help but wonder how much longer our nation can afford to fund all the natural disasters we’re having back-to-back. If we lose our power grid here in the frozen north this winter, for example, will anyone be here to set up shelters for us? Yet our lawmakers are giving big tax breaks to billionaires thus raising our national debt but when it comes time to balance the budget it will be cuts in Medicare, Medicaid and Social Security that Paul Ryan and Mitch McConnell have in their crosshairs. They’ve actually spoke those words out loud and we’re supposed to say, “Oh, well,” and go back to our holiday cheer. If I drank I’d get one of those Virgin Wines Advent Calendar boxes. Open a door every day and pull out a bottle of bubbly.

I am getting whiplash trying to keep up with the changes the current administration is making. This week Trump set things in motion to relocate an embassy to Jerusalem against the advice of virtually every world leader, and he’s radically slashed the size of protected lands in Bears Ears and Grand Staircase-Escalante National Monuments by 2 million acres---to the orgasmic delight of mining and oil exploration companies. And Utah is just the beginning. The administration has plans to shrink land in 24 national monuments including in Montana, California, Kentucky, a few states out east and the new marine monument in the Pacific Ocean. The smallest monument park, one in Mississippi that is dedicated to an early NAACP official who was assassinated by white supremacists in the 1960s is already under an acre in size. What possible justification could there be for slashing that national monument land in half other than it being dog whistle gesture to the guys who like to march around with Tiki torches?

Breathe, pace myself. Yes, time to change the topic. One of the commercial blogs I read from time to time had a topic this week titled A Powerful Reason to Give Gratitude During the Holidays and into the New Year. The bottom line, according to the article, is the holidays are often stressful so we need to double down on the act of giving gratitude throughout the day. “Gratitude stimulates your neurotransmitters, the hormones that bring energy and happiness into your living experience.” Or so they claim. Call me a cynic but sometimes I think the wine would work better.

What I am is immensely proud and grateful that I can still feel a full range of emotions, that I still have empathy and a sense of humanity that have not been crushed by Man or Nature. I am also grateful that Time Magazine chose the “Silence Breakers” that launched a global movement against sexual harassment as their ‘Person of the Year’ cover. I predicted it would Tarana Burke, the #MeToo Movement’s creator, and I got that and so much more. Woman Power is back and “the future belongs to those who are passionate and work hard.” Yes, I understand the audacity of quoting that line from Al Franken’s resignation speech in the context of the Time’s magazine cover. Life is messy. ©
Posted by Misadventures of Widowhood at 12:04 AM