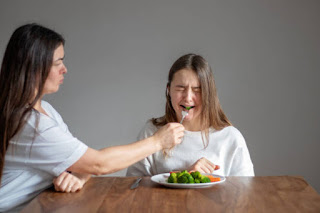 I ran into weird situation that put me in a mini meltdown during dinner in the fine dining restaurant on campus. I’m getting used to having people invite themselves to sit with me or me with them but something happened last night that flustered me to the point I embarrassed myself, then tried to back-track so I didn’t hurt a woman’s feelings. But what about my feelings? Why don’t people listen to others when we say, "No thank you" so many times we sound like parrots in a pet shop?

We were total strangers who ended up sitting across the table from each other and when her dinner came I remarked that I had ordered the cider chicken last week and it looked entirely different than what she was served. “How so?” she asked and I told her, “for one you got five times the amount of yams that I got and I didn’t get any of the dried apple embellishments on top.”

I was wondering if the chef was reacting to complaints about not serving enough vegetables with his entrees or if someone else was plating stuff in the kitchen and I wish I’d said that out loud because the next thing I know she picked several of the dried apples rings off her chicken and was trying to hand them to me. “These are really good, try them” to which I politely rejected her more than five times before she handed them to her husband. Hey, I didn’t know where here fingers had been! For all I know she could have been expressing the anal glands on a gerbil before coming down to dinner.

Then she started spearing yams with her fork, a fork she’d had in her mouth already and she was putting them on my plate. “Take them. I can’t eat these all.” I panicked. “Please don’t do that! I don't want them," I said, my voice getting more demanding with each time I begged her to stop. She had eight cubes of yams on my plate before I took my spoon and started transferring them to my bread plate. I’d had enough of her pushing food at me. In my mind’s eye I could see cartoon-like germs about to jump off those cubes of yam and contaminate my sea bass.

“I can’t stand eating off other people’s plates or have them eat off mine!” I told her and everyone else within an eight foot radius. Call me a germaphobic if you want but swapping germs with a total stranger is not in my wheelhouse. Sure, if she had been a cute guy and it was 50 years ago and we were clearly headed toward a night of playing kissy-face I have shared food in that situation but that was then and this in now---whatever that means. I've even taken a few offered fries from someone I know well, but only if my fingers alone touched them. My husband and I never ate off each other’s plates---at least not after his stroke when I knew exactly where his one working hand had been and it wasn't under a water facet as often as it should have been---and this total stranger wanted me to stick food in my mouth that had her fork germs inside? During a world-wide pandemic no less!

Trying to explain my outburst I said, “It’s a childhood thing. I was punished at the dinner table for sharing food.” I didn’t mention it was the dog I was sharing foods with that I didn't want to eat and it was my brother who'd sneak food onto my plate that he knew I didn't like. I got caught, he never did. She snatched my bread plate full of yams off my side of the table and passed it her husband who then asked her if he could try a bite of her chicken. Shockingly she turned him down with a, “No, I like it too much.”

There was a fourth person at our table. A woman from my painting class and we had a conversation about our last class before the couple joined us. She was upset with the teacher and says she’s not going back. When arriving at class she told the instructor she was expecting a call from a furniture delivery man, that she’d have to go let him in but would be right back to class after her new table was in place. When the call came and she got up to leave the instructor barked, “This is not a good time to leave! I’m teaching something important here.” She left anyway and who could blame her.

When she came back the instructor ignored her and sat down at another student’s place and painted on her canvas for 15-20 minutes. I’d be livid if she done that to my canvas. That’s not teaching in my opinion. At one point she said, “It’s still your painting. I’m just moving the paints around.” Ya, sure.

When she critiqued my work, she said, “The side of your barn would be perfect if it was on other side of the building and not that one. It’s not dark enough. Remember the light ALWAYS comes from the right.” “Unless it comes from the left,” I said, not meaning to be antagonistic. It just rolled off my tongue. “No, remember the sun comes up from the east, so the light source is on the right side. Always.” “Maybe my light is coming from a sunset instead of a sunrise,” That time I did mean to poke the bear. She walked away shaking her head and I darken my barn's siding.

To be fair, I'm not entirely sure if the instructor meant to say the east sun/right side "rule" applies to all paintings. It's more logical to think that she misspoke and meant just the canvases we were working. She did, however, plant doubt in my head about lighting rules so after class I looked through some art books and got reacquainted with the four basic light sources: back lighting, front lighting, form lighting and rim lighting.

That said, I need to once again post a disclaimer. I really do like this feisty Elf of a woman. She’s over 90 and speaks her “Truth” with conviction. Me? I have been known to panic with my Truth, letting my inner child's feelings get hurt (see top half of this blog entry). She also has me thinking art again and acting like a mouthy teenager and I like that. She’s also got what I don’t have---a great eye for mixing colors. It was amazing in an appalling sort of way to watch her turn my classmate's blue barn into a brown one. ©

Email ThisBlogThis!Share to TwitterShare to FacebookShare to Pinterest
Labels: painting