Alone but Not Lonely at Christmas 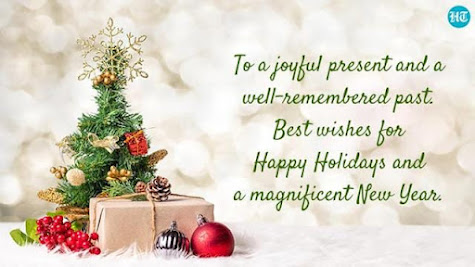 My first holiday season here at the continuum care campus has been busy and it included a bus tour billed as ‘See the Twinkling Christmas Lights.’ It was a lesson for me to read the fine print before adding my name to a list. Had I done so I would have recognized the tour guide’s name from 4-5 bus tours I went on through the senior hall. She spent two and a half hours going around and around the same streets of downtown, parking in front of various buildings to talk about their architecture and history. Some were decorated, some were not. In my head I thought we were going to parts of the city known for their over-the-top lighting displays. Not that kind of tour. And I'd taken this same ‘architecture and history’ trip before only during the daytime when you could actually see the buildings. The lady in the next seat is new to the area and she loved it. I was cold, bored and wanted to go home after the first hour.

It was cold, by the way, because 'someone' on the bus asked the driver to turn off the heat. Almost from the first day I met that someone I'd given her the nickname of The Mother because she’s quick to ask for changes around this campus. Very polite about it---but somehow aggressive at the same time, and she gets reactions from the staff. A fellow resident has pinned a less flattering label on her. I wonder what others here have nicknamed me. I’m the one who when I get served fries when I asked for mashed potatoes says, “That’s okay, I’m not that fussy” when they offered to make it right. The Mother would never accept anything but what she asked for.  “How else are they going to learn to pay attention?” Ya, we’ve had that discussion.

Before the bus tour, a tree decorating party kicked off the Christmas season and it came with hot chocolate and gingerbread cookies but I missed all but the last half hour due to an eye doctor appointment. Then on the 20th was our first real party which involved thirty of us gathering around the fireplace and piano to sing holiday songs---some religious, some the silly sort we've known since we were kids. They served a variety of tiny cakes and punch and Bing tried to pass out chocolates filled with 100 proof Irish whiskey but no one was taking any. I wanted to but I also didn't want to be the first one to do so and apparently I wasn't alone with that thought. He came to the party with a sealed box of 24 chocolate bottles and left with a sealed box of 24. Had he opened it before passing it around, there might have been a different outcome. I felt sorry for him, that his gift was so soundly rejected.

Then a Christmas buffet to die-for was the 23rd but no meals were served today, on Christmas. For those of us not going anywhere we could order a special boxed meal we picked up yesterday to warm up today. For those going to family parties they could order homemade pies, dinner rolls or mini loaves of bread to take along. Their bread is so good here I ordered a loaf to slice and another to put in my freezer. I certainly won’t starve to death over the next few days since I have peanut butter, bananas and a frying pan in the house to make an Elvis Special or two.

The kitchen, wait staff and practically everyone else around here has the day off but those of us with no place to go or no one visiting were encouraged to take our food down to the cafe` and eat together at noon today. I plan to take a thermos of coffee down to socialize but I'm not carrying my boxed, stuff chicken breast and trimmings down my carpeted hall, across to the other building and through the lobby. I will not risk being the first person to drop something that will stain the brand new floors.

All and all I’m quite happy with the way the holiday season has been going here. Some of the residents are having their usually guests coming for their holiday festivities just the same as they’d had at their previous homes and some went to relatives houses for a day or two. Earlier this week my niece brought her Dad and husband up to visit and to tour the place, then they took me out to dinner. That was extra exciting for me and it wouldn't have happened had I still been living on the north end of the city.

Those of us with no place to go Christmas Eve were encouraged to gather on our own down at the fireplace to share stories of past holidays but I was afraid I’d bring the holiday spirits down. Christmas Eve always comes with memories of my dad dying in the wee minutes of Christmas morning. A few weeks before then I had broken my arm in three places and was in a turn-bucket cast that made it necessary for my brother and I to move Dad into a Hospice home. I was an emotional and physical mess and Dad had been unresponsive for several hours. We knew the end was near when his hard-of-hearing roommate turned on the televised Christmas Eve Midnight Mass. Pipe organ music filled the room and my dad opened his unfocused eyes and said, “Am I there yet?” I knew he was looking for the Pearly Gates of Heaven. In better days he'd described them to me, the way he thought they'd be. He died shortly after that and I was still laughing through my tears. I cherish that memory from my Dad’s last minutes on earth as much as a cherish the at-peace look on my husband’s face when he passed over. Being there when someone dies can actually give you a sense of comfort but they're not exactly stories to share in a place where we’re all trying to put a positive spin on our shiny, new lives. So I didn’t go to the fireplace meet-up. I thought about it several times but I was close to tears several times this afternoon so I was afraid they’d run down my cheeks at an inopportune time and I’d have to explain.

Merrily Christmas, my cyber friends! Let's hope all yours and my holiday get-togethers were safe from Covid. A few people here are not going to go to the New Year's Eve party because they think everyone who spent time with their families on Christmas are going to be incubating the virus. Fingers crossed that won't be happening here or at your place. ©