The Widow Does Netflix's 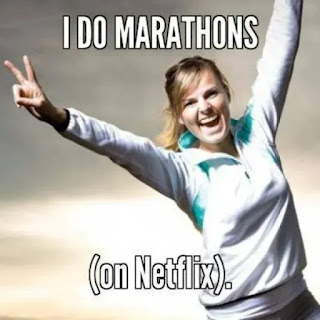 So far I’ve written about the things I love the best about living in an independent living apartment on a continuum care campus. One thing I don’t like is the television service. On paper it looks good ---60 free cable channels for one TV plus free internet and Wi-Fi sounded good after paying over $300 a month for a 60 channel package where I used to live. But 10 of the channels here are a sports package and there are probably another 6-8 others that I call Old People Channels which I don’t watch at all. I could care less about black and white movies or TV shows from my youth or game shows, but I’m in the minority on that opinion around here. I think. Oh, and I'd rather you gag me with a spoon than make me watch the imported shows from England. And did I mention the "cable" isn't a true cable and the service is effected by the weather?

Recently Seven Brides for Seven Brothers was on one of the old people channels and the lunch table talk the next day was about that movie. There’s a delightfully crusty women here in her late nineties who had never married and she just raved on and on about how much she loves that movie and how she watches every chance she gets. I like her because she has no filter when it comes to asking other people questions. For example when she found out that we have to write essay answers to questions in the ‘Stronger Memories class she tried to convince us all that “they” could take those answers to get inside our heads. They’re just questions to provoke memories like ‘what did you do for fun growing up?’ But she won’t take the class because she doesn’t want a psychiatrist analyzing her! Heck, I could analyze her based on just the premise that her all-time favorite movie being about seven brothers who essentially kidnapped a bunch of women to turn into wives. I might not be right in my analysis but I’d have fun doing it.

Never-a-Bride’s younger sister also lives here on a separate floor of the same building and both say they’d kill each other if they shared an apartment. She cracks me up. She asks me a lot of no filter questions. I give her a lot of sassy, no filter answers. She spent her career working in a lab that runs tests on blood for the medical community, the only woman in her field when she first started working. I would love to do a deep dive into her life story. But she plays the tit-for-tat game whenever anyone asks her a probing question and I’m not quite readying to bare my soul in this community yet. So I’ll gather her stories up like grains of rice leaking out of a tiny hole in a box of Uncle Ben’s.

Back to TV: Like I said we get free cable into our living rooms but if we want a TV in our den or bedroom it has to be a smart TV or an old set that you can hook up to the new version of the ancient antennas (rabbit ears) to pick up what local channels are available. I’ve got both, but apparently I can’t enjoy TV when I can’t have all three televisions set on the same channel so I can walk freely from room to room and not miss anything. I’ve never been a sit-and-watch kind of person but Netflix is turning me into one. So every night from 9 or 10:00 to 1:00 I’m binge watching and I can’t multi-task my time in the bedroom which is a problem I’m still working on solving. I downsized a standing TV tray out of my life that if I had it back I could put my laptop on it and multi-task while sitting on the side of the bed, but I doubt you can buy just one of those trays because they come in sets---at least they used to back in the '50s when they are popular. New mission: Find a way to do more multi-tasking with my Netflix beside fold laundry and clean the on-suite bathroom.

I started out binge-watching Longmere, a modern westerner that I loved, then I binged Outlander which I also loved. I hated to see them both end. If you don’t know that Outlander is based on a well-love series of time-travel romance books you’ve been living under a rock. I cut my romance reading teeth on time-travel romances so this was right up my alley. I tried to like House of Cards but I’m still too turned off by politics to continue. I also tried to like Grace and Frankie but like I told a fellow resident, all I could think about watching the first three episodes is how close I came to living the lives of those women---married to gay guys who didn’t come out of the closet until they were old enough to draw Social Security. I see the heart-break and deception while everyone else sees the humor. Schitt’s Creek is another one I tried to like, but didn't. I watched three episodes and see the show as version Green Acres. Rich people loss their money and have to adjust to living a different way---a popular series here on campus. The Maid was another one that didn’t hold my interest and I don’t know why but I'm thinking I just don't relate to the whole single parent thing. For awhile I watched The Ranch because I like Ashton Kutcher and Sam Elliott but that got boring after hearing the thousandth F word. I’m still getting used to Netflix’s having no restrictions on language or full nudity. I'm not offended by either one in the least but it's lazy writing when it's just there because they can.

Now, I’m binging and loving Heartland, Virgin River and I’m embarrassed to admit to liking Jane the Virgin. A lot. That show is so campy, stupid, silly, far-fetched and you never know what the writers are going to do next. (Mel Brooks on steroids.) I’ve watched a few movies on Netflix too, but nothing special enough or bad enough to mention. If you’ve got any suggestions for my next binge, leave me a comment. I’m going to need something new soon. ©