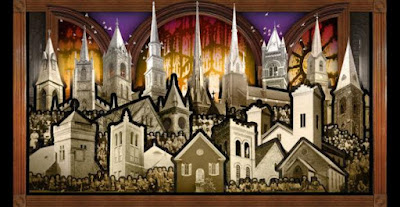 It finally happened. Someone asked the dread church question here at the continuum care complex. I’m surprised it took this long for one of my fellow residents to ask if I have a “church family,” which is a variation of “what church to you belong to?” or “go to?” that has plagued me my entire life, having grown up in what was once known as The City of  Churches.

When I was a kid, my parents didn't go to church but we lived within walking distance to four-five different denominations of Christian churches---yada yada yada---skip this and the next paragraph if you've heard it all before. Anyway, for a couple of years my brother and I were required to walk down to which ever church we wanted to go to on Sundays until I turned 10 or 12. We tried them all and we also went to some summer day camps sponsored by churches and I still have a silhouette of praying children I made at one of them. I'm not sure how my folks found out but there came a point when we'd often go up to the Indian mounds instead going to a church where we looked for arrowheads instead of learning about Jesus at Sunday school.

I probably wouldn’t have had that much exposure to the church if not for an incident that happened on the playground that started it all when another girl announced she couldn’t play with me anymore because I was“heathen who didn’t go to church.” That was the first time but certainly not the last time I lost friends after the dread church question came up and I was outed, so to speak, as a 'heathen.'

Having gone almost three months before the question was asked here I was starting to relax, thinking it wouldn't come up. But it did, in the fine dining restaurant on campus and I was sitting next to the college art professor when she popped the question. The two of us were sitting next to each other. Not by choice, by the way, there were place cards that night to go along with our reservations. They do that sometimes if they expect a full house and they don’t want to chance those of us with a reservation for one to tie up a table they need to set a larger group.

In past years I’ve had a variety of evasive answers I used to reply to the church question---"I’m between churches" being the one I used the most in my 20s and 30s and being that I was in the wedding floral business for those twenty-plus years I was well versed on the locations and insides of all the churches in town. I even had in-depth conversations with some of the pastors, preachers, priests and rabbis so I could talk a good game on the topic. Plus I’d taken several comparative religion classes in college, but more importantly I became an expert at changing the topic. It’s only been in the last 5-6 years that I’ve come out of the church closet, so to speak, and I’ve gotten used to the fact that the sky did not open up and I did not get extracted from earth like a SciFi space craft that zaps earthlings up to process our bodies into energy. So this time when the professor asked the church question I answered with a heart pounding, “No. Long story...” and thankfully someone from across the table asked the professor something, saving me from telling the tale of how my brother and I (and our parents) grew up without a church.

Not sure if I’ll get ostracized here or not when/if it becomes common knowledge that I’m not a Christian. And I was kind of shocked that it was the professor who asked the question but playing it over in my mind I think she asked to draw me into the general conversation because I’d been pretty quiet and her teacher instincts kicked in; I've seen her do that on several occasions try to draw the quiet ones into a conversation. (Have I mentioned I'm still fangirling her?) She and the other two at the table where having an extensive discussion about church choirs around the city. Icon Lady was at table and as nice as she is I've only found one topic of common interest between us---knitting. She’s probably the most creative knitter I’ve ever known. Each day she wears a different sweater or scarf with an intrigue pattern and she doesn't even use patterns. But you can only talk so long about various knitting stitches before the topic shifts and I have nothing to say. She talks a lot so she doesn't notice. And I'm fine with that.

The dreaded church question is how I know I’ll never form good friends here. I hold too much of myself back---the whole religion thing, the fact that I’ll read trashy romance books, the fact that I love to write, the fact that I'm a Flaming Liberal and the fact that I’m not easily offended. For example on the latter point, recently at dinner I asked the other women why they don’t like eating with one of the guys---it was pretty clear he was being ostracized from the group table---and the answer was because he calls everyone “Honey”.  Ohmygod, he calls his daughter and granddog ‘Honey’ as well. It’s nothing sexual or sexist or condescending the way he says it. At least not in my mind. I just assumed its because he’s in his mid-eighties and he can’t remember everyone’s name.

Ya, ya, I know it's 2022; I'm a feminist too but if he IS being sexist then you're not going to change a guy that age so why 'punish' him for being a product of his times? Why not just keep reminding him of your name if it bothers you that much? I thought all those things but I didn't say any of them out loud. If others want to live with bees in their bonnets over being called "honey" then who am I go full-out Pollyanna on them?

My world is full of foibles and nuances and I don't do well with people who see their world in blacks and whites. Or maybe I’m the one with tunnel vision and I can’t see my own prejudges are keeping others from getting to know the real me. I comfort myself by imagining that no one is really who or what others see, that at the core we all have our secrets and inner child's we protect from further harm. But I've got to admit there are days when I want to bitch-slap my inner child and tell her to grow up. And I'd put the F word in between the 'grow' and 'up' but I know it would offend someone out there in cyberspace. And that's another thing I do that I don't reveal to only a select few---I'm well acquainted with swear words. I even had to quit reading Military Romances because they put me at risk for having the crude language evade the filter in my aging brain and even I don't like to hear old broads swear like soldiers. ©

Email ThisBlogThis!Share to TwitterShare to FacebookShare to Pinterest
Labels: holding back, religion