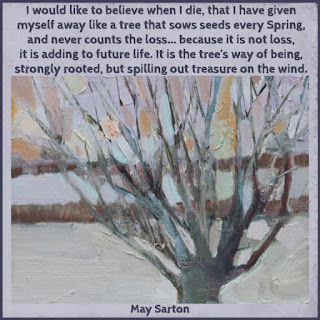 It seems weird to live in a town of over a million people and know that nothing social is going on anywhere. The schools, colleges and universities' extension buildings are closed until for the foreseeable future. The public libraries ditto. Churches canceled services and Laugh-Fest folded up most of their annual and very popular venues. Even the butterflies are flying around in our huge tropical conservatory without the thousands of visitors coming to see them. Their doors are locked, school buses full of children are not lined up at their entrance and won’t be this spring. All state Indian Casinos are closed and our state's Tulip Festival that brings 48 million dollars worth of tourist dollars into the economy was canceled. And on the boohoo-so-sorry-about-that front all elective surgeries in the area hospitals have been canceled so if you were hoping to get some fake boobs during spring break you're plum out of luck. All kidding aside, it's getting serious, people! This afternoon our president told the nation not to go to any gatherings of more than ten people and our governor ordered all bars, restaurants and coffee houses to close (except for take-outs and deliveries) for the next two weeks.

None of those closures affect me personally but I'm bummed out that I can’t even go through the take-out window at the Guy Land Cafeteria because just before the coronavirus came to town they had a kitchen fire and are closed for remodeling. God, I miss that place and while I don’t usually go through their take-out line, preferring instead to go inside where my people watching skills have been honed to perfection, I would have used it during these Code Red days we're in. They cook in plain view so we'd know if they dropped stuff on the floor and put it back on plates to serve. My nephew got fired from a line-cook job because he saw another cook do that and when my nephew challenged him about serving the steak, he was told to keep his mouth shut. So he followed the server to the table and told the customer not to eat it and why. The other cook kept his job, my nephew didn’t.

My other go-to place when I’m out and about, an oriental take-out place, I’ve cut off my list because the odds are high that some of their workers aka family members are international travelers. Not that it matters with the travel ban on but I've got that irrational thought stuck in my brain and it won't move along. A few weeks before Code Red put us all in social distancing mode, I’d already stopped buying deli at the supermarket because who knows who might have been breathing on my favorite chicken/grape/walnut salad and a day ago my favorite store closed their deli counters altogether and will package stuff up in individual containers. I might just have to start cooking. This week I did stock up on Atkins liquid diet meals and comfort foods. I don’t like to stockpile comfort foods opting instead to buy them as needed. If they're in the house, they'll end up on my hips sooner rather than later. But trying times call for drastic measures. Between the diet meal replacements and the goodies I refuse to name because they might incriminate me, my digestive system will be asking, “What the F is she doing to herself?” And I’ll have to explain---for the millionth time in my life---that I don’t know what I’m doing. I’m a stress eater and living in a Code Red world is stressful.

It’s all in the mind, though, isn’t is. Other than a few canceled events that I’ve experienced many times during winter ice and snow storms, my daily routine hasn’t really changed. It’s the fact that I'm being told I'm under house arrest that has me anxious and wanting to be on the go. I’m still e-Baying my brains out. I’m still going to the post office and I'll keep my CPA appointment today to get my incomes taxes done. I’m still playing on the computer and writing my silly little posts, hoping if I sent them out in the world something I write about will resonate with someone. If I was a more elegant writer I’d phrase that more like May Sarton: “I would like to believe when I die that I have given myself away like a tree sows seeds every spring…” Yup, that's me spreading my coronavirus paranoia out like pods off trash trees that no one wants growing in their yards.

I’ve heard about people taking the lemons growing during Code Red and making them into lemonade…taking the opportunity to do deep cleaning or finally getting to the bottom of their mending box. And let's talk about the obvious baby boom coming after everyone is freed from house arrest. (I'd like to suggest we call them the lemonade generation.) In my own family two of my relatives work for a company that makes and sells hospital beds world-wide and they were told to work from home until June 30th….can’t chance any of their critic workers getting sick and spreading it around the corporate offices. They are packing up their lives and going up north to their summer cottage, happy as clams for the opportunity to do that, which makes me wonder how the person who coined that ‘happy as a clam’ phrase knows if clams are happy or sad.

In this age of Google inquiring minds can find anything and I found this: “The phrase ‘as happy as a clam’ is derived from the full phrase ‘happy as a clam at high water’ where ‘high water’ means the tidal waves. The phrase means very happy and content with what a person has. Clams are collected during the low tide. So, during the high tides, the clams are safe from the fishermen.” Just think, I’ve lived nearly eight decades without knowing that. Thank you Pandemic, for helping me learn something new today. Now, please go away!  ©
Posted by Misadventures of Widowhood at 12:30 AM