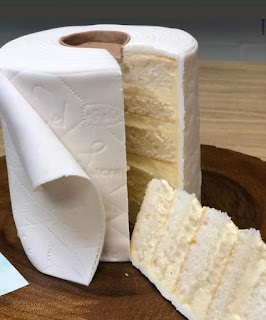 I’ve been walking around the house singing, “Stop the world and let me off. I’m tiring of going round and round.…” I’ve had those lines suck in my head for days. I can’t remember the rest of the lyrics but I’m pretty sure they don’t have anything to do with a Pandemic or being on a path to environmental suicide or being a flaming liberal living in a country run by an alt-right president. Nope, belting those words out this week may have started as a reaction the Pandemic but on closer examination I found nothing but good memories attached to the song including the first time I was introduced to those lyrics. It was back in 1958 and Patsy Cline was crooning them out from my cousin, Shirley’s record player. It was the summer I was unofficially indoctrinated into the country/western music fan club.

That summer she and her three toddlers were living in a small travel trailer parked behind our cottage, while her husband was overseas in the Army. She was a good singer and in the evenings when she wasn’t playing the likes of Hank Williams or Johnny Cash records she was playing her ukulele and leading us ‘cottage kids’ in sing-alongs. Other nights she’d make a batch of fudge or popcorn that we munched on while we played poker sitting at a picnic table under a single light bulb strung in the trees. It was a good summer of laughter and music and a naive belief that the world would always be that way. Shirley was a beautiful woman back then and not much older than we teens she entertained. Her life filled up with bitterness not long after that summer and I never saw her happy again. “Stop the world and let me off.” If only it was that easy to escape our woes.

I got my credit card bill for the month when I went crazy reading books on my Kindle. $55 worth of downloads, mostly books about Navy SEALS, Mercenaries and Delta Force military types. I took one look at that $55 and went directly to Amazon and signed up for Amazon Unlimited, hoping I understand the fine print correctly. For $9.99 a month I get to read unlimited books and I can cancel at any time. With the state of our clusterfucked nation I can’t seem to stop reading trash books about muscled-up men who are out to save the world from all the bad guys. I have, however, branched out to other authors than the first one who got me hooked on the “military elite” genre. I'm shocked at how many of them are out there.

Today I had to laugh at myself, though, when I realized I used military lingo in a conversation with my brother: “We need more intel on that” and “copy that” I said in our phone call. If I start swearing like a Navy SEAL please do an intervention. If these books are 75,000 words long (just guessing) at least 7,500 of them are the F word. And if I start planning a trip to California with aspirations of becoming a Frog Hog (aka a slutty woman who sets her goal on bagging a Navy SEAL) handcuff me to a chair in a shrink’s office until I’m cured of turning fictional alpha guys into my safe place. The world doesn't need anymore cougars.

I woke up at 3:30 a few nights ago and couldn’t fall back asleep. My niece is very sick. She says it’s the croup. Her two grandsons had it and she was taking care of them. Then her daughter and son-in-law got it. My brother stopped to visit and he said she was really mad that he walked in the house, fearing that he’d get it too and she made him march right back out. If they all get the coronavirus on top of the croup, when their immune systems are so low---I don’t even want to think about it. Apparently my subconscious mind has no such qualms about doing just that. Since I couldn't stop the world and get off, I grabbed my Kindle at 4:00 and relished the thought that I, too, could be a sniper who gets a clean shot of an international terrorist, making the world one less bad guy safer. Yup, some of the women in those books are as badass as the guys.

Seriously, these books are so out of character for me that I’m afraid to reveal that I’m reading them except to my blogger friends. Not that that’s anything new. I tell you guys things I wouldn’t blurt out in my offline life. For example, I rub my eyes way too often, given the fact that it's one of the ways you can put the coronavirus into your system. It’s eerie how something I’ve probably done subconsciously all my life suddenly becomes a death threat. God, where is my SEAL when I need one? I'm pretty sure he'd have a cure tucked away in one of the pockets of his cargo pants. Oh, yes, you know you're old when you find yourself lusting after what's in a man's pockets rather than what's behind his zipper. (Did I just type that? Ya, I'll do anything if it makes someone laugh.)

I haven’t been to my first senior shopping day yet at the grocery store. Tuesdays and Thursdays between 7:00 AM to 8:00. (Health care workers get other special days and times.) Ohmygod, how am I ever going to get up that early? One of my friends who has gone said most of the shoppers were wearing plastic gloves and the employees were all cleaning floors and the check-out lines. Toilet paper is being limited now that they have it back in stock---why didn't they do that early on? Stories of people helping each other are all over internet and the funny memes about toilet paper are making me laugh right out loud. There’s the bouquet of toilet paper a florist cooked up and an 18-wheeler that had a single pack of toilet paper strapped down on the bed of his trailer going down the expressway. The miniature toilet paper earrings and a cake made to look like a roll of toilet paper both tickled my funny bone. Did you ever think you’d see a day when the world would be obsessing about toilet tissue?  © 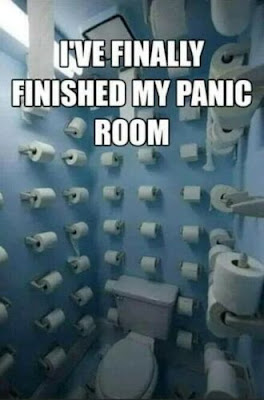