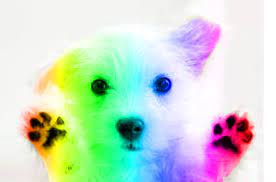 You may or may not remember that I’ve been nervous about getting through my cataract surgeries without getting an infection in my left eye, the one with the macular pucker. I was told that the fourth week out was the most critical time for one to appear and the doctor started me on eye drops a full week before the surgery to help prevent an infection and here I am in the seventh week post-surgery and up until today I was still doing six drops a day in that eye, with two different medications. At one point, between the two eyes I was doing 16 drops a day with four medications. The doctor has been measuring changes in that pucker weekly and on the fourth week added a new drop to “let out the gas” which I’m sure isn't a perfectly proper medical term but “letting out the gas” works for me. And ohmygod does that drop hurt/sting/burn. Takes me a full three minutes to recover from putting that one in and it has me moaning and groaning as if I’m having sex, even comes with a few “Oh God's” spoken out loud. Yes, I'm worried about what my neighbor on our shared wall thinks if she can hear me.

Today at my eye appointment I flunked the test on my pucker so I still can't get a new eye glass prescription written until the "cornea quits moving," another, interesting non-medical term but the good news is I now only have to do three drops a day, two of which are the ones that come with sound effects. The bad news is I walked out of that office deflated that I have to keep going back to track the damn pucker. At least I'm past the point where an infection is a major concern. When I asked that question the doctor replied, "Think so." The possibility still reminds, however, so I will keep following the rules---be militant with the drops, no wearing any eye make-up or rubbing my eye and don't get water in it.

After the surgeries I expected the world would be like the opening of the Wizard of Oz that starts out in black and white then turns into bright colors. I do see colors noticeable brighter with my right eye but not the left. I’m legal now to drive without glasses which hasn’t been true in a long time. This not needing glasses except to read has me misplacing my glasses more in the last month than in all of the last year.

A few days ago I found myself in the cafe' without my glasses to read the menu and one of my fellow residents said, “We’ll read it to you.” And they did. But that brought back a memory of a time my husband was mad at me for something long forgotten. We were out to dinner with another couple when I discovered I didn’t have my glasses and I asked Don to read the menu to me. His left-over anger from whatever we’d fought about earlier caused him to slash out at me---the bottom line being he refused to do it. His outburst left the other couple shocked and speechless. It took a lot to anger Don but when he was his fiery glare was enough to stop anyone from retorting.

Flashes of memories are like that when we age, aren’t they? Something small and meaningless can trigger a memory that can consume me for several hours as I try to recall more details. As with most of my flash-memories, I wasn’t successful at doing an archaeological style dig into that day at the restaurant. But I suppose the only important thing to remember is that Don didn’t make a practice out of embarrassing me in public. I can count on the fingers of one hand the numbers of times when that happened in the 42 years we were together.

In January Don will have been gone nine years. In some ways it seems like 9 months and in other ways it seems like 900 years. It took nearly half of those years for the widow’s pedestal many of us put our spouses on to start crumbing, and for me to see the full spectrum of Don’s personality again. It’s human nature I’m guessing, to forget the petty disagreements when someone has passed and to keep the good memories closer to the surface---the Disney version of our relationships---the one where no one has hissy-fits over toothpaste caps not replaced or ever farts while holding our heads under the bed covers.

Looking at my past is like looking out one eye, and then the other post surgery. I have two distinctive views---one probably accurate to its history, the other more like looking though a filter of rainbows and swishing puppy dogs tails pushing the colors around into a mosaic of happiness. If/when dementia catches me in its trap the big question will be which version of my history will be locked inside my head as I withdraw from the world? And can we program our brains to choose while we’re still logical, thinking human beings? My dad and brother both walked into the land of dementia. One mostly accepted it, the other fights it, fears it. What will I do when my time comes? I've always had a fertile fantasy life, will I  even know when dementia takes up residence? ©