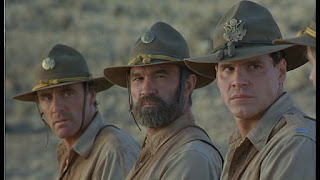 The plot of one of my all-time favorite films---In Pursuit of Honor---is based on a defining moment or in the words of the lead character, “It’s a long story about a quick decision.” In the movie Don Johnson plays a member of the U.S. cavalry who decides to defy orders to destroy hundreds of army horses and instead he drives them to Canada with the U.S. Army in pursuit all the way from Texas to our northern border. I don’t know what it is about the movie that speaks so strongly to me but the fact that it was based on a little known event in history has something to do with it. I’m fascinated that someone threw away what was best for his own future to go AWOL and pursue what he considered to be the more honorable thing to do. What’s not to love about a man like that?

One defining moment in my life, which led to a whole series of defining moments, took place after Don’s stroke when I decided to take on his recovery process instead of following the advice of the medical community and leave him in a nursing home for the rest of his life. To steal a line from another one of my favorite movies, “that decision changed life as I knew it.” Another one of my defining moment happened the summer after high school when I backed out of going to an art school in another state where I’d been accepted, opting instead to go to a city college closer to home. If we had do-overs in life I’ve often thought I’d like to do that one decision differently. But if I had, I might not have met my soul mate, Don. I say “might” because during the time frame I would have been at that out-of-state art school Don had spent several vacations in the same town I would have been in. I tend to believe we still would have found each other just like we did eleven years after our first, brief meeting as high school students.

Now I’m at a point in life where I have a lot of decisions to make and several will become defining moments for the rest of my life. Widowhood does that to a person…it forces us into facing a basket load of decisions. Some big and important decisions like when, where and if I should move, some not so big. But right now I have to decide what to have for dinner. ©
Posted by Misadventures of Widowhood at 5:48 PM