Where Have You Gone, Christmas? (Newtown CT)

In a year of firsts for widows, probably the hardest first is not the same one across the board. Some might say their wedding anniversary; others might say the birthday that can no longer add a number to an age, still others would name Thanksgiving, Christmas or New Years Eve. For all widows the holiday season, as a whole, is full of painful reminders of long standing family traditions that can never be the same again. Each holiday song heard in a store, each light on a neighbor’s house, each card in the mail screams, “He’s gone, he’s gone!” Happiness is all around us and even the friendliest festivities only magnifies our loneliness. We are alone even in a crowd.

In the wake of what happened recently in Newtown, Connecticut, my loneliness at Christmas time pales and it almost makes me ashamed to even be writing about it. But I write when I have things on my mind. I can’t help myself. If I don't, I can't sort out my thoughts and put them to rest. I start by getting the raw emotion out (ramble writing I call it) and by the time I've honed the technical aspects of sentence structure, word choices, spelling and editing---well it’s better than going to a shrink which I’ve never done but I have a good imagination.

I don’t have to be alone on Christmas Eve or on Christmas day. I had choices but I turned down two invitations because I don’t want to pretend, to carry on as if the invisible place setting at the table isn’t there. If I need to cry on the eve of Christmas, I will. If I need to wallow in a memory of a past Christmas day, I will. Like the time Don decided to give the dog an entire box of Bonz biscuits. If one is good dozens must be heaven on earth, right? Wrong. He spread them all over the floor then watched in horror as Cooper went into panic mode trying to protect them all. It seems trivial to treasure a memory of Don feeling so guilty over a pile of dog biscuits but it is what it is---a silly but endearing reminiscence. Our Christmas mornings often went to the dogs. They opened gifts, tore paper apart and played with their new toys like real kids do after Santa’s arrival.


The parents of the children who died so violently in Newtown no doubt have much harder choices to make about Christmas Eve and day than whether to go some place or stay at home with their grief. They have other children who still believe in Santa, a community of support outside their doors, and hearts that are seriously scared by sorrow. My heart aches for them, for all the Christmas mornings their children will never see. How do they heal from something like that?

Unfortunately, those poor parents know where their Christmas went, who took it away and they have to live with that painful knowledge for the rest of their lives. I only have to live with the fact that a good man---an old man---ran out of time on earth. My husband lived the life he chose for himself, did most of the things on his Bucket List. The little victims in Newtown probably didn’t even know how to spell the word ‘evil’ but they came face to face with it on the day they died.

I am a firm believer that everything on earth has a counterweight---a yin for each yang, a positive for every negative, a woman for every man, a shadow for every light, and if nothing else the evil event in Connecticut brought an enormous outpouring of goodness and love from around the world. From casket companies donating child-sized coffins to Ann Curry’s 26 Random Acts of Kindness Project to the teddy bears, flowers and balloons that lined the streets in Newtown the expressions of kindness are overwhelming. That collective caring is like a candle flame in the darkness. It symbolic but I hope it’s also prophetic predicting that the twenty children and six teachers didn’t die in vane, that their deaths will become a catalyst for real change.

And how will I survive my first Christmas alone in the shadow of what happened in Newtown? I will watch Miracle on 34th Street, bake myself some bacon wrapped chicken and be profoundly grateful I got 42 years with my husband. I will also shed a few tears for the parents in Connecticut and every where else on earth who will never get to see their precious children grow up.© 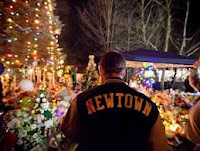 (Lyric above from the song, Where are you Christmas?)
Posted by Misadventures of Widowhood at 12:03 PM

Email ThisBlogThis!Share to TwitterShare to FacebookShare to Pinterest
Labels: Bonz, Connecticut, mass shootings, NewTown, Where Have You gone Christmas