Who Shot the Cheyenne?

My husband had a couple of life-long friends and when they got together the stories would fly back and forth, laughter would bounce off the walls. If you look up the word ‘buddies’ in the dictionary, you’ll see a picture of the three of them. That’s how close they were. Back in 1978 Don and one of those friends went out west together on a hunting trip in Don’s brand new pick up truck with duel gas tanks and a custom leather interior. And when I say it was brand new I mean he literally picked it up from the dealership a few hours before picking up his friend.

Every where they went since they hit the state line of Wyoming people were staring at them so they decided to scout out a western clothing store. As naive as it sounds now they thought leather cowboy boots, Stetson hats and western cut shirts was going to change that. It didn’t, of course. They were Easterners who walked and talked too fast compared to the locals and new clothing wasn’t going to mask that. They might as well have bought t-shirts imprinted with the words: Two Guys on a Holiday!

After hunting a couple of days without success they decided the reason the antelope weren’t impressed enough by their marksmanship to do more than just look at them with amusement was because they needed to sight their rifles in for longer distances. So out in the middle of no where, with no witnesses around, Don sighted in his Winchester then stepped aside for his friend to do the same. Ron placed his Browning 30.6 across the hood of Don’s truck ever so carefully so he wouldn’t scratch the finish and then he pulled the trigger.

“Did you see where the bullet hit?” Ron asked.

“Right there,” Don replied in a deceptively calm voice as if what had just happened was an every day occurrence. He was pointing to a bullet hole in the hood of truck. Then Don did something that drained the color from Ron’s face and frozen him in place. He slowly drew his .38 pistol out of its holster and for a few seconds Ron saw his life flash before his eyes. Damn, he’d shot Don’s brand new Chevy Cheyenne and he was going to die for it! But Don had other plans. He plucked the new Stetson off his friend’s head, threw it up in the air and deftly put a bullet hole in one side of the crown and out the other.

“I’m just getting even with you,” Don said and if he was mad he sure didn’t show it. Then he put his pistol back in his holster and after some blustering and teasing back and forth Don told his friend not to worry about it, the dealership could fix it.

Ron, of course, was embarrassed and offered to pay for repairing the bullet hole---many times---but when they got back home Don had one excuse after another for not getting the body work done. Weeks turned into months. Months turned into years. And it wasn’t until Ron ran into a guy who was a co-worker of Don’s that he learned the true reason why that bullet hole never got repaired. Everyone who’d see that hole in the hood and would ask about it was an opportunity for Don, the master storyteller, to be at his best. The story of who shot the Cheyenne had become a legend, the ultimate hunting trip tale. With his great comedic timing and ability to turn a five minute event into a half hour hilarious story, the tale of the wounded Cheyenne always had Don’s listeners splitting their sides with laughter.

When the truck finally out-lived its usefulness and was loaded up on the back of a flatbed truck ready to go off to the junkyard it was missing a chunk of the hood. Don had cut a piece out, memorializing the bullet hole that inspired so many how-the-heck-did-that-happen questions.

The thing that was so amazing about my husband wasn’t his ability to tell a good story—although that was pretty amazing---it was his ability to adjust to not having any speech at all. In the 12 years after his stroke his working vocabulary consisted of a couple of dozen hard-earned nouns and the phrases, “Oh, boy!” and “Oh, Shit! and Oops!” But he didn’t let his losses him turn him bitter. He stayed good-natured, and he especially loved it when his life-long friend would come over and tell their two-buddies-on-a-hunting-holiday story. Over the years Don, Ron and I had all put our own spin on the minor details but one thing remained the same: none of us ever got tired of hearing the story about the day the Cheyenne got shot. © 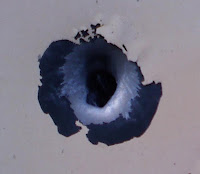 Posted by Misadventures of Widowhood at 9:44 AM