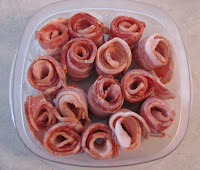 We used to know a carrot farmer and he told us to never to buy carrots without smelling them. Back in those days---15-16 years ago---3rd world countries used Kerosene for herbicides and if you have a good nose you could detect the toxic stuff with the sniff test. I was reminded of this in my cooking-for-one class this past week and of another story he told about how orange carrots became the color of choice. Carrots used to grow naturally in a rainbow of colors, but in the 17th century a Dutch grower started cultivated the orange carrots as a tribute to William of Orange who, as the story goes, led the struggle for Dutch independence. Over a generation the purple, white and yellow carrots fell out of favor and the rest is food growers’ history. It’s funny how things in life come full circle. Recently our local supermarket started selling the heritage colored carrots and the skinny dietitian teaching my class is singing their praises. She says they are more nutritious than the orange, especially the ones that get machine shaped and polished---those cute little “baby carrots” I’ve been buying for years.

The dietitian should have called the course, How-Not-to-Cook-So-Much-for-One. By the time we get through all six sessions she’ll have us grazing in the fields and orchards in her campaign to get us away from processed foods, time-consuming cooking and ingredients that come with long labels filled with unpronounceable words. She’s a vegan but claims she’s not trying to turn us into one. Ya, sure. Is that why this week’s class was about all about using nutrient rich whole grains without a bite of meat in sight? She’s got me wondering, though, if I haven’t been feeding the birds and rabbits better/healthier than I feed myself. Karma is laughing at me through this class, I just know it. I never took an interest in cooking in my younger years and the very first cooking course I sign up in for in my entire life seems to be all about cooking less and eating closer to the earth.

The grains and pseudo-grains we sampled in class were all new to me---bulgur, farro, wheatberries, quinoa, spelt, triticate and amaranth---but they were surprisingly good mixed with varying combinations of things like fresh spinach, tomatoes, feta cheese, olive oil, garlic, mustard, balsamic or raspberry vinegar, cranberries, apples, oranges, agave, and pecans. She says these grains are easy to slip into any salads and soups, have a long shelf life for single living and freeze well in small batches after cooking. So turn your ice cube trays into grain trays if you want to be healthy in your widowhood---that’s my big take-away from the class. You never know when you’ll get the burning urge to plop a cube of grain on your dinner salad or in a mini-crockpot of soup.

My second cooking-for-one tip I offer with apologies to the swine population and while wearing ear muffs so I don’t have to listen to the vegetarians and vegans yelling at me. It’s something I learned from a Food Network magazine and have been doing for a year now: roll your bacon before freezing it (see the photo above). And the next time I’m waiting the 6-7 minutes for a slice or two of bacon to defrost I will take a moment to thank the organic food industry for making ancient and Old World grains new again. According to the class dietitian they are easy grains for small farmers to grow without using pesticides---and presumably without Kerosene---than the better known grains we’re used to see coming from the big, chemical dependent factory farms. Who knew I’d have to get old and widowed before appreciating the value of making grain porridge. ©
Posted by Misadventures of Widowhood at 9:56 AM