From Going Blind to Jigsaw Puzzles and Gritty Netflix’s 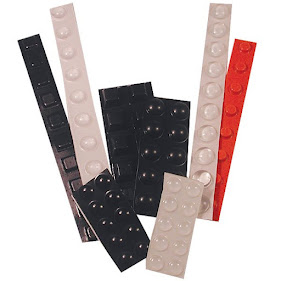 The Association of the Blind put on a presentation at my continuum care complex. I’m not in danger of going blind anytime soon but knowledge is power and my threshold for boredom is pretty low which is why you’ll find me at most of the informational experiences offered on this campus. You can always find something useful and this time I learned about these things called ‘Bump Dots.’ When the woman talked about how putting these tiny rubber dots on things like stoves, washers/dryers and electronics can help the blind I knew I wanted a couple for my microwave. That sucker has a black panel that is hard to read unless you have a flashlight in your hand. I happen to have a card of ‘Bump Dots’ marketed for another purpose---for the the bottom of vases and things you don’t want to scratch the tops of your furniture---and the minute I got home I dug them out. Well, not the same minute, I had to pee first but you don’t need to know that. I can’t believe that two little dots on my microwave have made so much difference. No longer do I need to keep a flashlight handy just to heat up some water for a hot beverage or to heat up my bean bag/foot warmer in the microwave at bedtime. (And aren’t we all glad the beanbag season is almost gone.)

The community jigsaw puzzle table has been entertaining since it arrived 2-3 weeks ago, but not for the reason you might imagine. It’s been bounced around to different locations Goldilocks and the Three Bears style. One room was too cold, another too far off the beaten path and the just right place in the lobby, the marketing director didn’t like. She was cagey like a fox and went to the CEO to get it moved yet again. But as the concierge correctly said, “If there’s ever going to a protest march on this campus it will be over the puzzle table.” Six of the puzzle workers went to the CEO in mass and told him the marketing director doesn’t live here and shouldn’t have a say it it. Not to mention they’re marketing this place to people over 55 and old people like to do jigsaw puzzles. The puzzle went back to the lobby.

But that wasn’t the end of the puzzle drama. We finished one puzzle and Mr. And Mrs. Matchy-Matchy started another puzzle only they started it with the top of the puzzle running along the side of the puzzle table so it’s hard make any sense of what you’re looking at and they laid out all the pieces to one side of the of the border pieces instead of on both sides making it hard for anyone but them to work on it. One of them sat in front of puzzle-in-progress and the other stool blocking all the pieces. With the first puzzle we could get five people around the table working together. I don't know what to think about the group puzzle experience. I also just found out that someone took a puzzle piece home so he could have the satisfaction of putting the last piece in place. With the second puzzle, two people did it. Someone needs to remind them they're not twelve years old. And once I was standing with a piece in my hand when another resident took it out of my hand and said she knew where it went. She didn’t. Why did she have to have that piece when there were 500+ others on the table to choose from? It's one of the old people mysteries I can't solve except to say I'm wondering if a community puzzle is bringing out some long, lost sibling rivalries.

On to my latest Netflix obsession. If you liked the gritty, character driven series In the Dark you’ll probably also like Hap and Lenard. It’s based on Joe Landsdale’s book series by the same name. It’s set in East Texas in the late 1980s and I’ll quote a Salon article to describe what it’s about. “Hap is a former 1960s white radical and hippie. He is best friends with Leonard, a black gay Vietnam veteran who is also a Republican. Together in their small corner of the world they try to do the right thing in keeping with their own code of honor about respecting the human rights and dignity of all people. The television series and novels are compelling on a number of levels, but what is perhaps most striking is the authenticity of the relationships between the characters and how Lansdale's humane values shine through in what he describes as his Southern noir-influenced 'mojo' style of storytelling.”

I will add that Hap and Lenard became friends in early childhood after a drunk driver killed both their fathers. Honest to God, some of the seedy situations they get themselves into had me sitting on the edge of my bed in the wee hours of the morning more than a few times. It’s not a series everyone will like, but if you like crime/thrillers you might want to try Hap and Lenard. It got canceled during the Trump administration when racial tensions heated up and the show became too hot for Sundance TV. A good article about it can be found at the web address below. For some reason the Bloggers platform isn't allowing me to embed the link today.   ©