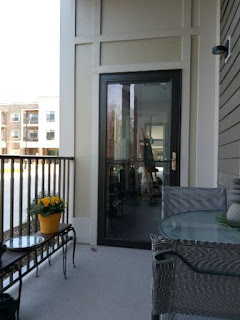 Maintenance here at the CCC can be a two edged sword with one side sharper than the other. On the sharper side, the system for writing up service requests works well for those of us who are computer literate. With the exception of that time a maintenance man was on vacation and an office girl closed out the work order about my water without sending one of the guys around to check it out, I have no complains. And yet here I am finding something to get picky about---the dull side of the sword: They’re not good at giving us prior notice of when they’ll be stopping to do things.

This week I got an e-mail saying they’d be installing screen doors on our units starting next week, but two days later two guys showed up at my apartment with a box containing my screen door. I had just stepped out of the shower, had my hair wrapped in a towel and my heavy winter bathrobe was buttoned up to my neck so I said, “Okay.” I wasn’t going to fall into the trap of saying come back later because you get downgraded to the bottom of the list. They have their way of picking through jobs so they keep their tool carts in certain areas for as long as possible. Two hours late I had my brand new screen door in just in time to greet spring if it ever gets to my part of the world.

Mine was the second one installed in the complex and the neighbor who got one that same morning wasn’t home when hers was put in. She was unset because “they didn’t put the screens in! What are we supposed to do? Call them to change the glass and screens twice a year? Are they going to store them for us?” I tried to tell her that the screen was self-storing and rolled up (like a window shade) at the top of the door but I wasn’t getting through to her. I might have through the same thing if I hadn’t looked at the door online before I ordered one and I understood what I was getting. Word to the wise for anyone who isn't already computer literate, get there while you can because even in places like this upper middle class Continuum Care Complex life is easier if you can keep up online. We have our own app the covers sixteen areas of our lives including phone directories for staff and residents, dining menus, pastoral services, Life Enrichment schedules and so on.

There is a woman who moved in two weeks ago that I swear is going to worry herself to death. She walks around with a schedule of what’s going on for the week in her hand that one of her kids printed out for her. She seems to think if she doesn’t find the right room for, say, an exercise class or she misses the dining hours that she’ll get punished or kicked out. She doesn’t grasp the concept that no one in charge of anything cares if we show up or not. The word 'independent' in the term 'independent living' seems to be a hard concept for many people to understand. All of us have friends and family who've asked questions making it clear they think we moved into something like the Witness Protection Program only for old people hiding out from scouts looking for residents to ship us off to nursing homes.

Anyway, if our new resident gets moved out it will be because maybe she should have gone directly to memory care and by-passed independent living. And maybe deep down that is what she fears? I sat next to her at our baked potato buffet one night and she asked me four times when I moved in. To be fair, most of us moved in together in October and it was hard to keep our back stories all straight when you’re trying to learn them all at once. She needs to relax and give herself time because there is no Litmus Test coming. Well, there is actually but there is only one question: Are we residents a danger to ourselves or others? But even if we are they can’t move us out of our independent apartments without the consent and full cooperation of the person/family member we named as our power of attorney. And people with money could in theory even hire  live-in or part-time caregivers if they didn't want to move on down the food chain of a continuum care complex. There is a business associated with our CCC that covers all kinds of stop-gap services if we need them but we don't have to use that one in particular company.

The new resident has a three year old Chocolate Lab that nearly tipped me over jumping on me and I’m not a small, frail woman. She has no control over that dog and if anyone gets kicked out her dog might be asked to leave if it hurts someone. Its owner just lets go of the leash when the Lab sees someone it wants to greet. It did a full gallop and a two legged bounce against me.

Now that spring is here I’m seeing a lot of dog walkers, mostly from the surrounding community who like taking our road and walkways through our wooded property. I don’t blame them. It’s one of the major reasons I bought here---the fact that it's so dog friendly. Now that I’m settled in, though, and my raw grief over losing Levi is in the rear view mirror I’m 95% he was my last dog. Just the right dog would have to fall in my lap for that decision to change.

I still missing living with a dog. You can’t have a dog in your life 78 years out of 80 without feeling like a part of you is lost. Heck, neighbors called me the Poodle Lady for years, the one who threw birthday parties for her dogs and taught them circus tricks. But I keep reminding myself that all my life I’ve had my own back yard and I didn’t need to walk my dogs. That changes everything in the grand scheme of growing older. ©