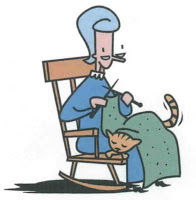 My long-time hairdresser had a melt-down that caused her to cancel several appointments which meant I had to find someone new to cut hair. Enter the new kid on the block who, in the time it took to cut my hair, called me ‘cute’ or ‘cutie pie’ five times. I’d be flattered except she was calling me ‘cute’ for no other reason than in her mind I’m too old to be computer and cell phone literate. For example, when it came out that I use my computer every day, she said, “That’s SO cute!” And I had to bite my tongue to keep from telling her I’d been using a computer/word processor every day since before the internet was invented but I wasn’t sure I could pull it off with the right tone of voice. There’s a fine line between old-people chit-chat and old-people cranky talk if you’re not careful.

When it came out that I have a cell phone and know how to text…you guessed it. “Oh, that’s SO cute!” my new hairdresser gusted. I wanted to say that I’ve had a cell phone since she was watching Sesame Street in her Pampers but I wanted a ‘cute’ haircut, not the don’t-come-back style reserved for mouthy or crotchety old customers. What’s so hard about texting, anyway? We seniors just have to learn to use a different set of codes than younger people do. Things like: ATD for “at the doctor’s,” WAITT for “who am I talking to?”, and WTP for “where’s the prunes?” etc. I would have told her about the old bag cell phone I have in the basement, but she probably wouldn’t believe it has a battery so big that you had to carry it and the huge handset around like a purse---thus the term “bag phones.” Don and I were some of the very first people in town to use cell phones.

You have to develop sense of humor about the way others stereotype you but I will admit sometimes I’ll use their stereotypical view of me for my own amusement. I’ll say things that shock even me. Yesterday I had an appointment to get my elbow break x-rayed and to get a bone density test. In the waiting room a woman, upon seeing my arm in a sling says to me, “Poor dear, how did you hurt your arm?”

“I’m on a roller derby team,” I told her. “And I forgot to put on my elbow pads one day and wouldn’t you know it that would be the day I took a fall. It’s hell getting old and forgetful.” I no more got those words out of my mouth when the nurse called me back to a room so I didn’t have time to tell the woman the truth, assuming I would have been inclined to do so. This exchange took place the day after I’d been gusted all over with ‘cutes’ from the hairdresser and I’d reached my weekly quota for endearments people reserve for old people.

Accepting our age and the stereotypes that go with whatever age bracket we’re going through at the time can be ego deflating. Back when Don turned 50 he got on a kick where he’d tell waitresses that he’d just turned 60 and did he quality for a senior discount now?  These waitresses knew us as regular customers and they would reply something like, “Wow, you sure don’t look your age!” After joking back and forth Don would admit the truth and we’d all have a good laugh. This went on for several weeks after his birthday until one day we went to a state park where the girl taking the money at the entrance didn’t know us. After Don pulled this fishing-for-compliments routine, the girl looked Don squarely in the eye and gave him the senior discount rate. That was the very last time he pulled that joke.

Since old people are stereotyped as always talking about their medical conditions I don’t want to disappoint anyone who is still reading this blog entry. So here’s an update on my arm/wrist. The sling is gone, the elbow break is healed, but I can’t lift, push or pull on anything for a week while I take another round of Prednisone for my hand and wrist. The trauma of the fall may have caused carpal tunnel and I’ll have to get tested for that if the Prednisone and babying my wrist doesn’t cut down on the pain and throbbing I get in two fingers and my wrist. (I’m not the type to give anyone the finger, but right now I couldn’t if I wanted to.) The orthopedic doctor says that the carpal tunnel like symptoms could go away if I didn’t have a mild case of it before the fall, but if I did have mild CT before it won’t go away now without treatment. I spend a lot of time on my computer and have for many years---a common cause of CT---but from day one I’ve always had an ergonomic keyboard and I’m fairly sure CT was not present before my fall. That makes me hopeful that it will go away on its own and that some day, if I lose my impulse control as I age, I’ll be fully capable of giving the finger to an aid in a nursing home who is trying to force-feed me medication-laced applesauce for lunch. ©
Posted by Misadventures of Widowhood at 8:00 AM