Four Widows and a Block of Cheese 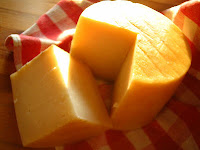 This past weekend I went out of town to a 50th anniversary party for one of my cousin’s. It was a happy event for a wonderful, giving and kind couple who has contributed nothing but goodness to the world. I was in her bridal party and it’s a telling statement regarding the disproportion of women to men in my age bracket that when we lined up for the reenactment photos all four of us bridesmaids were still alive but only one of the groomsman was still kicking around. But what I found fascinating was, quite by accident, I ended up sitting next to a stranger who’d been widowed within a few weeks of me and for most of our adult lives we lived within three blocks of each other. What are the odds of this chance meeting three hours out of town? I only knew three people at this event---the celebrating couple and the bride’s brother---but I didn’t feel out of place or lonely. Like magnets coming together two widows found each other and the common threads running through our lives.

Then the next day I went to a baby shower and was talking to yet another widow---this one is under 35 with young three children. Her husband died from an overdose of prescription drugs just a few months after my husband died. She looked much happier than when I saw her at Easter and her future looks bright. She’d moved closer to her core family, got a new job and a new boyfriend that she says is a serious relationship, and her kids are settling nicely into a new routine. I hope she takes it slow with the new guy but then again, why wait if you’re lucky enough to get a second chance at love? The past is past and we can’t have it back. Speaking of luck, both the young widow and I won good luck bamboo plants playing baby bingo. How cool is that?

Have you ever heard of the book, Who Moved My Cheese? I picked up a copy at the senior center for a quarter but I’d read about it on the internet back when I was looking for grief support related stuff. The book is used by a lot of corporations that are trying to motivate their employees not to resist change. It’s a short parable featuring two humans (Hem and Haw) and two mice (Sniff and Scurry) who all lived in a cheese station connected to a maze. When their cheese came up missing the mice quickly scurried off through the maze to look for more while the humans grew hungry and depressed mourning the loss of their cheese. They were afraid to go back out into the maze---they’d been in the cheese station happy and content for a long time---so they kept waiting for someone to bring their cheese back. They even grew angry at the unfairness of having what they valued taken away. Yadda, yadda, yadda---you get the picture and I think most of us widows can see how this parable could be applied to the grieving process. The block of cheese in the story is, of course, a metaphor for what we want to have in our lives.

Which of the four characters in the parable do you most closely identify with? In widowhood I am a Sniff. In the back of my mind I always knew my disabled husband could die before me so I was more prepared than the young widow at the shower who lost her husband unexpectedly. She would be more like Sniff. She has  worked hard to pick up the pieces and is moving forward at a rapid pace. The widow at the anniversary party was a Haw---afraid and paralyzed in her grief early on but has since found a way to plot forward. All three of us are hopeful that at some point we’ll be able to savor the adventure of finding and tasting new cheese. And the forth widow, the one most like Hem? I didn’t see her over the weekend because she’s been sitting at home all alone, out of sight and waiting for her old cheese to magically reappear. ©

“When you move beyond your fear, you feel free.”
“The quicker you let go of your old cheese, the sooner you find new cheese.”
“It is safer to search in the maze than to remain in a cheeseless situation.”

Spencer Johnson, M.D. author of Who Moved my Cheese?
Posted by Misadventures of Widowhood at 8:00 AM

Email ThisBlogThis!Share to TwitterShare to FacebookShare to Pinterest
Labels: anniversaries, Who Moved My Cheese, widows