The Widow and The Lone Ranger 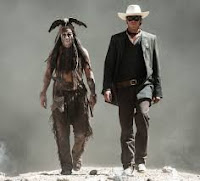 “I’m living a strange half life.” That’s a line from a movie I saw recently and it was said by a divorced guy about his single-hood. He had a beautiful home, a job he liked and friends but his life lacked spice much like the salt-less broths served in hospitals. That movie line spoke to me and about me. At times I feel like a sailboat with no wind to push me along. If you’re on a sailboat with no wind sometimes it feels good to drift and have an excuse to relax but other times it’s frustrating if you have somewhere to go but you can’t get there. As a widow, I feel like I have somewhere to go but I don’t know where that is and the drifting isn’t helping me discover my destination fast enough. I’m old! I want to be content again.

This week marks my 18th month as a widow and one more month to go before I’m at the end of the Second Mourning Period (if I was living in Victorian times, that is). In this century we don’t formally recognize the Second Mourning Period, but I strongly believe that custom never should have gone the way of afternoon teas, butterfly collecting and petty coats. Be that as it may, this seems like a good time for me to write a progress report on myself. So here it goes….

My emotions are no longer raw like they were in the first six month of widowhood and even less so than at the year marker. It’s rare, now, that a crying jag will hit me out of the blue. I can even listen to the Prime Country radio station without every other song churning up unbearable memories which most widows know is a big hurdle to cross. Still, I have a few moments on occasion when I choke up like last week when I was cleaning in my closet. I had run across the half dozen shirts of Don’s that I’d saved when I packed up the bulk of his clothes to take to the Salvation Army. But I’m a strong little widow, don’t you know, so last week I bucked it up and added a couple of those shirts to my ‘donate’ pile---but not without regret and sadness that I’ll never see Don wearing them again. If you noted a hint of sarcasm in the way I’ve just characterized myself you’re not mistaken. I am no stronger or weaker than other widows. We are all just in varying places on the grief timeline. All and all, I’m doing well. Don’s ghost no longer seems present in the house which is both sad and probably a healthy sign at the same time.

How am I doing on meeting people, trying to build a circle of friends, which is my biggest challenge in widowhood? Not so good. It’s still hard not to have a sounding board and someone who cares how my day is going. "Volunteer!" so many people told me to do which prompted me to turn in an application to work at a small town museum opening up soon. Unfortunately the time I spent in an arm sling is the time when they moved out of their old, cramped museum and into the new building so I couldn’t help with the move. This week I went to their first organizational meeting regarding a fund raiser auction planned for the fall. Only five people showed up. I had hoped for a group big enough so I’d have a better chance of meshing with one or two others. They tell me more people will show up to help as we get closer to the auction. Oh, well, at least I’m trying.

I’m also still going to the going to events at the senior hall including the monthly Movie and Lunch Club. Today we saw The Lone Ranger. In IMDb’s mini blurb on the movie they wrote, “Native American warrior Tonto recounts the untold tales that transformed John Reid, a man of the law, into a legend of justice” and they labeled it an action adventure western. What they failed to say is the movie is a genuinely funny film. Johnny Depp as Tonto and Armie Hammer as the Lone Ranger were perfect casting and even Silver, the white horse, brought some great laughs from the audience and my group of ten. In the last fifteen minutes of the film, when they finally started playing the William Tell Overture, the Lone Ranger’s theme song from the radio, movies and TV shows of my youth, we were all sitting on the edge of our seats and laughing at the fast-paced action. We left the theater upbeat and in a happy mood. At lunch one of the ladies said she thought you had to be our age to catch a lot of the humor but few of the other ladies agreed with her. But one thing we all did agree on is that this version of The Lone Ranger is well worth seeing, especially if you grew up in the 30’s, 40’s or 50’s when the serialized stories of the Lone Ranger and Tonto were so popular. “Hi-Yo, Silver! Away!” ©
Posted by Misadventures of Widowhood at 9:32 PM