The Trial…or Trail if I’m Having a Dyslexia Day 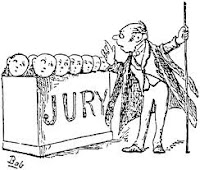 I must be a glutton for punishment or one very bored widow with nothing to do---nothing to do that I really want to do, I should clarify. There’s always a closet to clean, a plant to move and when is the last time I washed my windows? The punishment I’ve been putting myself through this week? Okay, confusion time. I’ve been watching the live feed from the George Zimmerman trial while at the same time reading and posting on a discussion forum about the trial. As of today there are nearly 40,000 posts in that discussion thread and I’ve probably read half of them plus contributed about fifty of my own “well thought-out and brilliant" comments. Don’t we all think our opinions are brilliant while nearly everyone else has one that borderlines on what-the-heck-are-you-talking-about?


Seriously, after taking part in this activity for most of the week I can honesty say I’m glad I’ve never had to serve on a jury. It’s amazing how so many people can see and read the exact same testimony and come up with entirely different impressions. Every 10-20 pages on the discussion thread someone posts the question, “Are we watching the same trial?” It's like people only hear what fits with their preconceived theories and prejudices on what happened. Do they listen with half their brains tied behind their backs? Do they lack the objectivity or sense of fairness to sift through the bull and apply logic? I don’t know the answers but what I do know is there will be no winners in this trial no matter how it turns out. Too many lives have been changed because of what happened that fateful night of the shooting.

I usually resist the temptation to blog about political or controversial current events which is characteristic of how I am in my daily, off line life. I generally keep my opinions to myself having been raised to believe you don’t talk about religion, politics or money in public. Heck, I’ve been so faithful to that rule for living in a polite (and somewhat old fashioned) society that not so long ago I shocked someone I’d known for over 40 years by saying that I am not a Christian. You’d have thought I’d grown a pair of knockers on the top of my head, the way she looked at me. She kept saying, “You’re kidding, right?” “No, I’m not kidding,” I replied, a little braver with each repetition. But she loves me, so eventually she got around to believing that I’ve entered a state of early Alzheimer’s and I just couldn’t remember that I’ve been a good and moral little soldier all these years. That is easier for her to accept than the idea I've found a different path to living a virtuous life than going through Jesus.

Oh, my God, it just dawned on me that I can use impending senility as an excuse for me coming out of the ‘religious views’ and ‘political activist’ closets! Yup, I could stand up at a senior hall event, at the next baby shower---even in my back yard while running around stark naked---and scream, “I’m a liberal democrat who flirts back and forth between with the New Age Spiritualism and Humanism!” and people would say, “Don’t mind her. That’s crazy old Jean. Her mind is going, don’t you know.” Why doesn’t it ever occur to anyone that older people just get sick of carrying around our membership cards to the Don’t Make Waves Club? No, we get accused of changing, of getting saltier or more judgmental in our golden years when half the time we're just getting ripe enough to show our true selves to more than just our spouses. But not to worry, I don’t plan on ripping up my DMWC membership card until I’m 92 and that’s a long way off. In the meantime, you can find me posting anonymously “over there” in the Wild West of internet “hot shots” who all think our poop doesn’t stink. Oh, and just so you’ll breathe easier tonight, I don’t plan on running around in my back yard without my skivvies any time soon either. Well, not until I can finagle a total body makeover at Tuscany’s Terme di Saturnia Spa Resort. ©
Posted by Misadventures of Widowhood at 8:34 AM