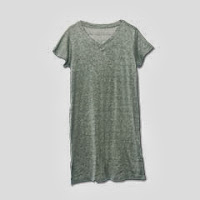 It occurred to me this week that every other night I’m wearing my nightgown inside out. I take it off in a manner my mom used to call “skinning the kitty” but somewhere along the line I quit turning the nightgown right side out before hanging it on its hook. Then at night I’ll grab the wrong side out garment, put it on and when it comes off in the morning, skin-the-kitty style again, it turns right side out. This is another old people thing or I’m I just getting lazy or are they one in the same? My nightgown is actually an old, v-neck t-shirt of my husband’s. It’s extra-long and reaches my knees and it’s getting so worn and holey I really should throw it out. Boohoo, I don’t want to do that except I feel the breath of an anonymous social worker on the back of my neck, making judgments and deeming me ready for a nursing home. Someone has to save old people from the dangers of appearing sloppy and as poor as a church mouse, she'd be thinking. Note to self: Don’t start getting the mail in your nightgown because one of the neighbors could have social services on their speed dial.


My husband wasn’t much taller than me but because he was in a wheelchair and in charge of dressing himself he could never get his pants pulled up high enough on one side thus the extra-long t-shirts did a good job of hiding his fanny. This is a common problem with people in wheelchairs and it’s always bugged me that others don’t understand they can’t help it. It’s just the way it is. Disabled people usually do the best they can to dress themselves and the rest of us need to do our best to ignore an exposed fanny from time to time. That’s hard for one particular acquaintance of mine to do. She’s so judgmental on this topic that it makes me crazy, but that’s a rant I should probably turn off and go on to other things. Sometimes I forget I’m no longer an advocate for stroke survivors. I have widow and old people issues to fry now that my husband is gone.

A few days ago I took an older cousin-in-law on a little road trip to have lunch with another cousin of ours. The cousin I picked up has gotten so frail since I saw her last at my husband’s funeral but she's still as sharp and as much fun to be around as she's always been. I hope people can say the same about me when I'm her age. Back when the three of us were young I spent a fair amount of time with each of them and at lunch we had a good time talking about our families past and present. It’s a shame we lost that closeness over the years. But the miles separate us physically and our lives all went in different directions separating us in other ways. It’s the way of the world when kids grow up and leave their core families behind.

Have you ever played the what-if game where you daydream about how you would have been different if so-and-so had remained in your life? Usually we do it regarding someone negative---an x-spouse, a nasty parent or even someone we loved who didn’t love us back. Rarely do we wonder what influences a do-gooder type would have had on our life trajectory, but I did just that after our cousin’s lunch. I suspect I would have turned out to be a better person if the influence of my younger cousin had reminded in my life all these years. Let’s just say she got all the Mother Theresa genes in the family. She’s probably the most charitable, do-good person I know---genuinely sweet and giving where I’m pickier about my do-good causes and more protective of my free time. She’s touched so many lives that when she dies they'll have to hold the service in the local high school auditorium. When I die my service could take place inside a Volkswagen. In other words, she threw rocks in the pool of life, I threw tiny pebbles.

One of the most interesting things about growing older is we get to see how the choices we made early on in life panned out over the years, we get to see how the people who came in and out of our lives have enriched us or torn us down, and we get decide if we’d take a do-over if do-overs were humanly possible. I’m putting on some rose colored glasses here but I like to think that most of us by the time we enter our “Golden Years” are happy with the way we turned out---or at least we’ve made peace with our personal histories---and we wouldn’t change much in our pasts. Our collective good, bad and the ugly experiences all had a hand in building the kind of people we’ve become. Take something ugly out of the mix and more than likely we wouldn’t have the same level of appreciation for the good stuff that came along later. Bottom line: I like myself and how I turned out but I sure admire my younger cousin. She’s so much like my dad in character and personality you’d think we were switched at birth if not for the two years that separate us. Get out the fiddles, there might be a country western song in there somewhere.

My house cleaning service comes in a few days and the girl assigned to my house is in college part-time, working towards a degree in social services. She’s a sweet, compassionate young woman but I’m starting to think I should buy myself a new nightgown so I don’t end up as Exhibit B in a term paper she has to write. When to Get Involved: Signs to Look For In Our Aging Population. One of these days she’s going to hit the chapter on protecting senior citizens from themselves and she’s going to start pushing numbers on her cell phone if I don’t shape up and get rid of my shabby, widow’s nightgown beforehand. ©

P.S. This is the 200th blog I've written since my husband passed away. I don't know what that means but I thought I'd mention it.
Posted by Misadventures of Widowhood at 8:40 PM