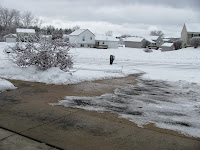 In my area of Michigan, they are calling this the worse ice storm in ten years. People as close as a mile away are without power. Some of my relatives counties south of here are without power. Can you image spending Christmas in an emergency shelter? If they don’t get the power restored soon, that could easily happen to a lot of people. We have 1,000 out-of-state power workers from as far away as Kansas and the District of Columbia helping us out but high winds and more snow, the weather people are saying, could take out even more power for more people on Wednesday. I’m pretty lucky considering it could be so much worse than being encapsulated in ice the way I’ve been in recent days. But I must admit the isolation that goes along with having everyone trapped inside their houses makes me feel like I’m living in an episode of Lost in Alaska---except for the fact that I have Face Book to confirm that, yes, there will be no White Knight coming to my rescue. All the White Knights riding dog sleds are iced in, too. And the entire kingdom is still without the coveted driveway salt.

The photo above is of my driveway. It took me two days but I was able to get an ice-free path down to my mailbox. Then I ran out of salt and started using oil soak-up---that’s the black stuff you see on top of the ice. Like Kitty-Litter, it gives enough traction so you can walk safer on top of the ice and I also have ice fishing cleats on the bottom of my boots. Still, it makes me nervous, given the condition of my old bones. But I resisted the temptation to shoot myself up with extra doses of Forteo for my osteoporosis before suiting up like a little kid going to a snowball fight. I paced myself. I chipped ice a half hour, went inside and knitted a half hour then I repeated those two activities over and over again from noon to dark.

The retail stores in the area are still out of salt but I got a great surprise when I opened my garage door this morning, thinking I’d do some more chipping away on my driveway ice. Overnight my driveway plower showed up and had salted! I had called him three days ago but he never returned my call so I didn’t expect him to opt me into his salting service this late in the season. It was the best Christmas present I could have gotten. I shut the garage door trusting that the salt would do its work of drilling holes down through the ice and I was feeling much better knowing if I had to leave, I could get back up my driveway when I returned.

When Don and I used to plow snow we had a salting service along with plowing and, boy, did I hate that job even though all I had to do is drive and Don was the one who had to load the 50 pound bags of salt into the spreader. We salted at a large multiplex movie theater and a shopping mall and I could never drive slow enough to suit Don. Anything over five miles an hour had him yelling, “Slow down!”  One time he fell off the tailgate of the truck and I didn’t know it until I’d made an entire pass from one end of the mall and back again where he was waiting for me in the cold. It was so icy that he couldn’t have walked if he had some place to go. I think that happened more than once but I’ll never tell.

Needless to say, I won’t be driving out to my niece’s house in the country for the family Christmas Eve party. She has a generator to keep power in the house, if needed, but my days of winter driving in bad weather conditions are over. I’m sad but okay with missing the party. I’m no longer in pity party mode because I had to miss six of the eight holiday parties/events I had lined up. Winter is winter and you have to expect the unexpected. That’s the breaks. Don’t cry over milk that is still in the carton. Yadda, yadda, yadda. There will be other social events when the weather is better and above all, I’m sitting in a nice warm house with a pretty view out my living room window. I could be fighting over sleeping space on a steam vent in a downtown alley. How on earth do street people survive this kind of weather? I am indeed one lucky widow. ©

Posted by Misadventures of Widowhood at 5:58 PM