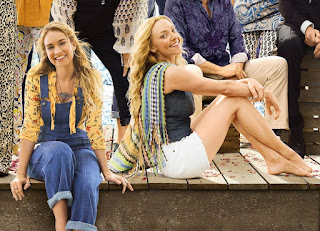 Three of my Gathering Girls pals and I went out to lunch and then to go see Mamma Mia! Here we go Again. I’ve never been to a more confusing movie in my life and I wasn’t alone in that opinion. The two of us who hadn’t seen the original Mamma Mia got totally lost trying to follow the flashbacks. If you see it, here’s what you need to know: the 2018 Mamma Mia is both a prequel and a sequel to the original film and the four main characters were played by eight actors---and the audience needs to believe that the younger versions (in their early-twenties) some 25-ish years later could have morphed into people who were played by actors ages 58 to 69. Do the math. It doesn’t work. Other quirky casting head-scratchers were Cher at 72 playing Sophie’s grandmother while Meryle Streep at 69 played Sophie’s mother. I’m sorry but no amount of camera filters makes that math add up. And did I mention Meryle appears as a ghost to sing duos with her daughter? Even the hotel morphed from run-down to restored and back and forth a few times using weird camera tricks that had me wishing I had a drink in my hand to explain the weirdness they triggered in my brain.

I’m always fascinated with how IMDb capsulizes a film’s storyline down to one sentence and this case they wrote: “Five years after the events of Mamma Mia! (2008), Sophie learns about her mother's past while pregnant herself.” Yup, half the movie was spent showing how the mother (younger Donna/older Meryle) was a slut having had three affairs with strangers during her fertile days resulting in a pregnancy. The three guys, lo and behold, somehow became best friends by film number two and they all considered themselves to be co-fathers to Sophie. (Like getting a DNA test never occurred to any of them? Was that explained in movie number one? I just don't know!)

I do know that both Mamma Mias are musicals based on a lot of ABBA songs and, of course, there were bell-bottoms and colorful costumes galore and masses of people dancing everywhere including on the boats that brought people to the Greek Island hotel where most of the movie's action took place. At rogerebert.com the review said the older fathers---Colin Firth, Stellan Skarsgard and Pierce Brosnan---looked like they were “forced into singing ABBA songs that clearly make them miserable.” I, on the other hand, thought they looked like they were having great fun clowning around in a senior hall musical.

I like to watch movie trailers before seeing a film and to read reviews afterward (before writing my own) and I ran across an on-camera review from The Onion, a web satiric site. It made me laugh and I saw myself in what Peter K. Ronsenthat said because I really had no interest in seeing this movie. I went because the others were lusting to see Cher, Meryle and the ever popular-with-senior-women Andy Garcia. I did not know the actress, Lily James who played the younger Donna but she’s a great singer and she was in Cinderella, Downton Abby and War and Peace. I also didn’t know the other talented young woman who played Sophie, Amanda Seyfried. She was in the original Mamma Mia and also in Les Miserble. But for the entire movie I thought flashback younger Donna and Sophie were played by the same actress. It was only after consulting Professor Google that I could be talked out of that delusion. Like I said, I’ve never been to a more confusing movie. Still, it was fun to hear the old ABBA music and to know that people approaching or in their septuagenarian years can still pull off acting gigs that required them to climb hundreds of step to a mountain top chapel.

The New York Times scathing review was probably one of those The Onion reviewer had in mind when he said something like, “Did you really expect Schindler’s fucking List? It’s July, not Oscar season.” For myself, I was glad we went on cheap Tuesday because I had enough fun to warrant paying the discounted rate but not enough to feel good if I had forked over another five bucks. It was a silly movie---and I generally like 'silly'---although I could have done without the fast moving colors that occasionally gave me what felt like psychedelic color induced brain blinks. But I did find myself wishing I could have jotted down a few lines of dialogue like when a woman was introduced to Andy Garcia she said, “Have him washed and brought to my tent.” An old joke but it made me laugh and another line I liked was said by younger Donna: “Life is short, the world is wide and I want to make some memories.” Good memories is what my gal pals and I made that afternoon and since half the fun of going to the movies is comparing notes afterward we also stopped for ice cream before going home. ©

Note the photo at the top: Those are the two girls I thought were played by the same actress. I still can't tell them apart. They even sounded the same.

The very funny review from The Onion