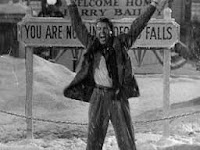 Have you ever sat next to someone who announces she’s so sick she should have stayed home in bed and you’re thinking, “Thanks a lot for bringing your germs out in public” but you actually say, “Oh, that’s too bad, dear. I hope you’ll feel better soon.” It’s at times like that, though, when I wish I could scoot my chair back with the speed of light and shout, “Get away from me!”


“Occupational hazard,” she says after describing how long she’s had the hacking cough and sore throat. She’s a daycare worker and apparently she, her co-workers and the kids have been trading germs back and forth all winter. I didn’t want to be one of her trading partners but aside from being rude, what choice did I have but to sit there imagining grimy little daycare germs flying through the air with each coughing spell?

By now you’ve probably figured out where this is going. Yes, I got sick the next week---the day before Christmas. It started with the chills and an all-over achy feeling, but I’d been outside chipping ice for two days and I thought maybe I had just gotten too much cold air down my lungs. Then my throat got sore and my voice took on a course, gravelly sound like heavy smokers get. The coughing spasms started next. If I was a kid I’d think I have whooping cough. Sometimes the spasms don’t want to stop and I think I’m going to crack a rib coughing so hard. But on the good side, I don’t have a fever and I still have enough color that I won’t get mistaken for a cast member from the Walking Dead. The house is also well stocked with tea, honey, soup and throat lozenges. The lozenges, however, are six months past their expiration date but I’m assuming that won’t kill me.

Christmas morning I got a call from my sister-in-law inviting me over for a prime rib dinner that afternoon. Had I felt like going it would have been nice to have some where to go but I had to decline. I didn’t want to be the person who says, “I should have stayed home in bed” while everyone else is pushing their chairs back trying to put distance in between themselves and my germs. So I settled in my La-Z-Boy with a bowl of mint chocolate ice cream and watched It’s a Wonderful Life with Jimmy Stewart and that was my Christmas.

I love that old black and white movie. But it did get me to thinking about managing our expectations. George---the hero Mr. Stewart played---had a life-long, unrequited dream of traveling the world and doing big things. But over the years he had to learn how to balance his regret and acceptance of never fulfilling his dreams. Still, he never appreciated that he actually did have a pretty wonderful life…until he was given the opportunity to see what the world would have been like if he’d never been born---how one person missing in the landscape could throw off the yin/yang balance. He saw how his saving one life led to saving many others. He saw how without his kind-hearted and moral business sense to counter-balance Mr. Potter’s Scrooge-like business practices the town would have grown into a cold, depressing and immoral place. He saw that his life was rich beyond measure in friendship and family, that he actually had done some pretty amazing things in his life.

I don’t know if it’s true for everyone in my age bracket or of just widows or just a few of us ‘well-seasoned people’ but I spend a lot of time trying to balance my regrets and acceptance of unfulfilled dreams and time trying to manage my expectations for the rest of my life. I don‘t want to set my sights too high or too low. For me, I know that widowhood brought on this discontent. When I was just living my life with Don I didn’t think about my long-ago unrequited dreams. I didn’t think about my own mortality. I just lived in the moment as much as I could because that worked for me while I was living in a world full of his disabilities where anything and everything could change in a heartbeat. We made the best of life, had happy times and lots of laughs. Now, I feel like I’m wasting time, kind of like George felt at the beginning of the movie when one thing after another got in the way of his making his Great Escape.  Sooner or later I have to quit worrying about the future and learn to live in the moment again. Like George, I have to learn to appreciate the rich life I've had and can still have. It may not have been the life I planned but it's been a good one.  ©


“Life is what happens to you while you’re busy making other plans.”
John Lennon

Posted by Misadventures of Widowhood at 2:26 PM