I’ll give you a tip: Never walk through the showroom of a dealership unless you’re prepared to be wowed by their newest acquisition and never, ever ask the salesman you’ve bought your last few vehicles from what your trade-in value is on your present car unless you’re prepared to be pleasantly surprised. In the past I've never bought anything over hundred bucks without researching it and sitting on the decision for a day or two but on Wednesday I broke that unwritten Rule of Life here in Jean County. And how did that happen? I’m not sure beyond the fact that my Malibu needed its 15,000 miles maintenance done and I left the place with an agreement to buy a brand new Chevy Trax mini SUV. All I had left to do to own the thing was to arrange for insurance, local the title for the Malibu, get the money from the bank and return the next day. I got a great deal! Minus the trade-in and GM Family First discounts and rebates, the SUV now sits in my garage for just $9,000 out of pocket. Using Jean Math I’m also deducting my income tax refund from that which drops the 2015 Trax down just under $6,000.

There goes the money for the trip to Alaska I was thinking strongly about going on next summer and good-bye to a new iPad. That purchase is getting put on hold---again---until I can sell a few more things on e-Bay. There’s irony in waiting for an iPad, though, because the Trax has built-in Wi-Fi. I still can’t wrap my mind around that feature. It even has a phone apt that lets you lock/unlock the doors, hit the horn and flash the lights plus remote start the vehicle. I would say the only thing you can’t do in that mini SUV is fry eggs but that would be a lie because it has a household plug to run a printer or whatever appliance you want including an electric frying pan. That should come in handy should I ever find myself living in my car.

Impulse purchase or not, after a life time of driving pickup trucks and full sized SUVs I haven’t felt safe in the Malibu and it certainly has contributed to me being afraid to drive in snow these past two winters. I’ve also missed having cargo space, sitting up high enough to see ahead in traffic and having a back-up camera. It should be a law that everyone over seventy has a back-up camera, especially those of us who have driveways with blind spots. The neighborhood mothers can rest easier now that I’m no longer the old lady backing up on a driveway that tempts kids on tricycles to go "weeeee!" all the way down the incline.

When I bought the Malibu a few months after Don died, it was the first major purchase I made with the exception of a cemetery stone and at the time I couldn’t get rid of our Traverse with the wheelchair lift fast enough. If I could have left his memory service and sold it on the way home I would have. It was depressing me to see keep seeing the place where the EMTs worked on him just before transferring Don to their ambulance a week or so before he died. I sold the Traverse to a relative for a few thousand over trade-in value, saving them a ton of money over dealership prices. They were (and still are) happy and for a while I was happy, too, to be driving the little Malibu. But over time I realized I missed having haul-stuff-around space inside. But mostly, I seriously missed feeling confident and safe driving in the winter.

What worried me the most about buying the Trax isn’t that I bought it on impulse, although this is so out of character for me that if I had kids they’d probably think it’s time to put mama in assisted living where I couldn’t write checks or even go shopping without an escort. No, what worried me is that I might pull the same impulse buying trick when I toured a condo a few days later.  A house is definitely something you don’t want to buy on impulse! The condo, as it turns out, was in a neighborhood that was baron of any trees or landscaping and I hated all the dark wood floors, dark painted walls and black marble counter-tops. I wasn’t remotely interested in living there even though it was a zero steps concept condo which is second on my ‘must have’ list just under it being a pet friendly community. Thankfully, I didn’t make two major purchase on impulse in one week. Even I would have wondered about my mental health had I done that.  ©

The Great Debate:  Please weigh in on the great sweater debate going on in my head. Is this toddler sweater doomed to win the ugliest sweater contest or something else? I had fun making up the color blocking as I went along but I'm not sure if I should be embarrassed (or not) to give it to the senior hall craft sale and more importantly, make any more crazy sweaters to donate. (Note: The green didn't photograph well. It's a clear, primary color green.) 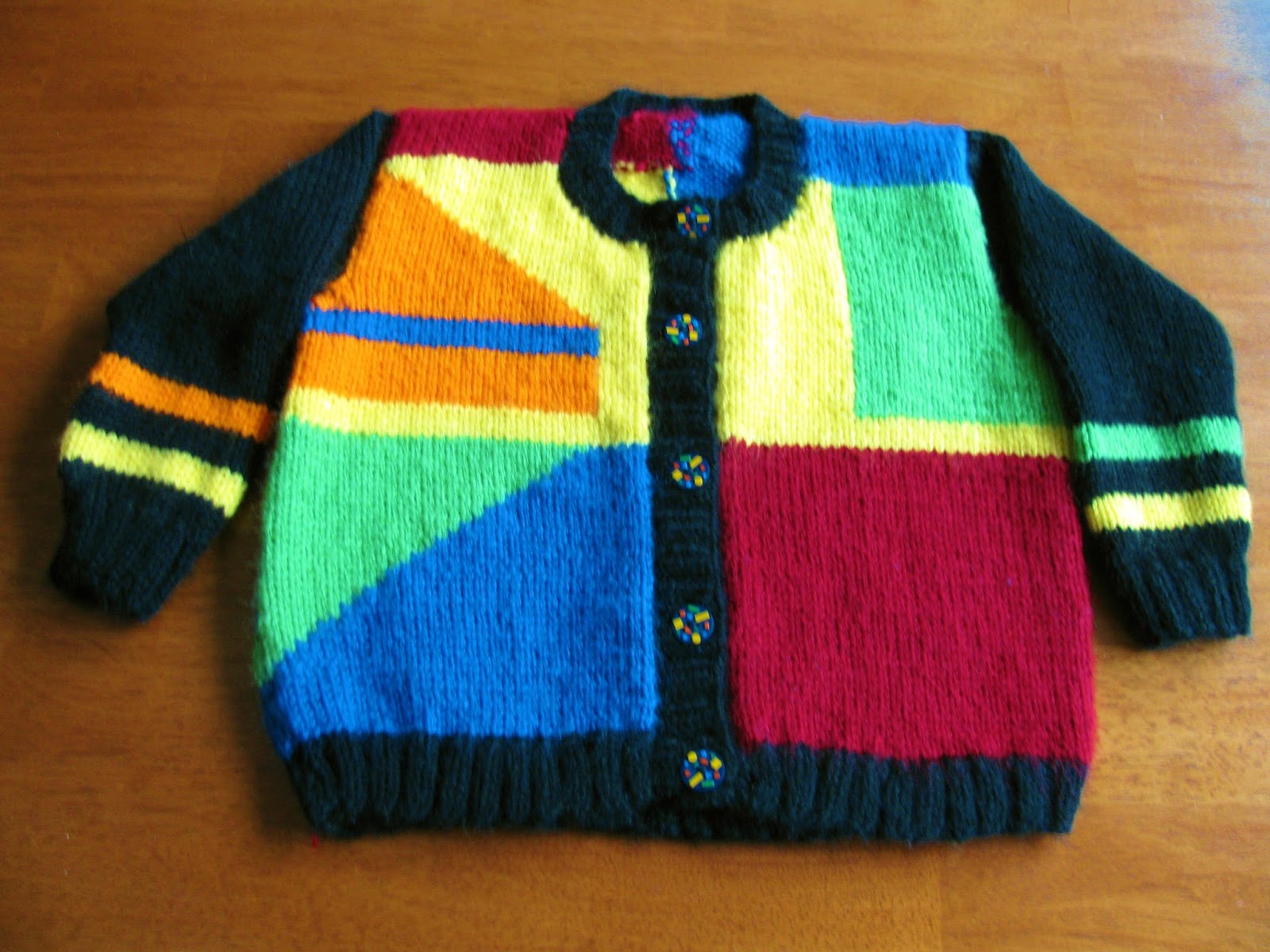 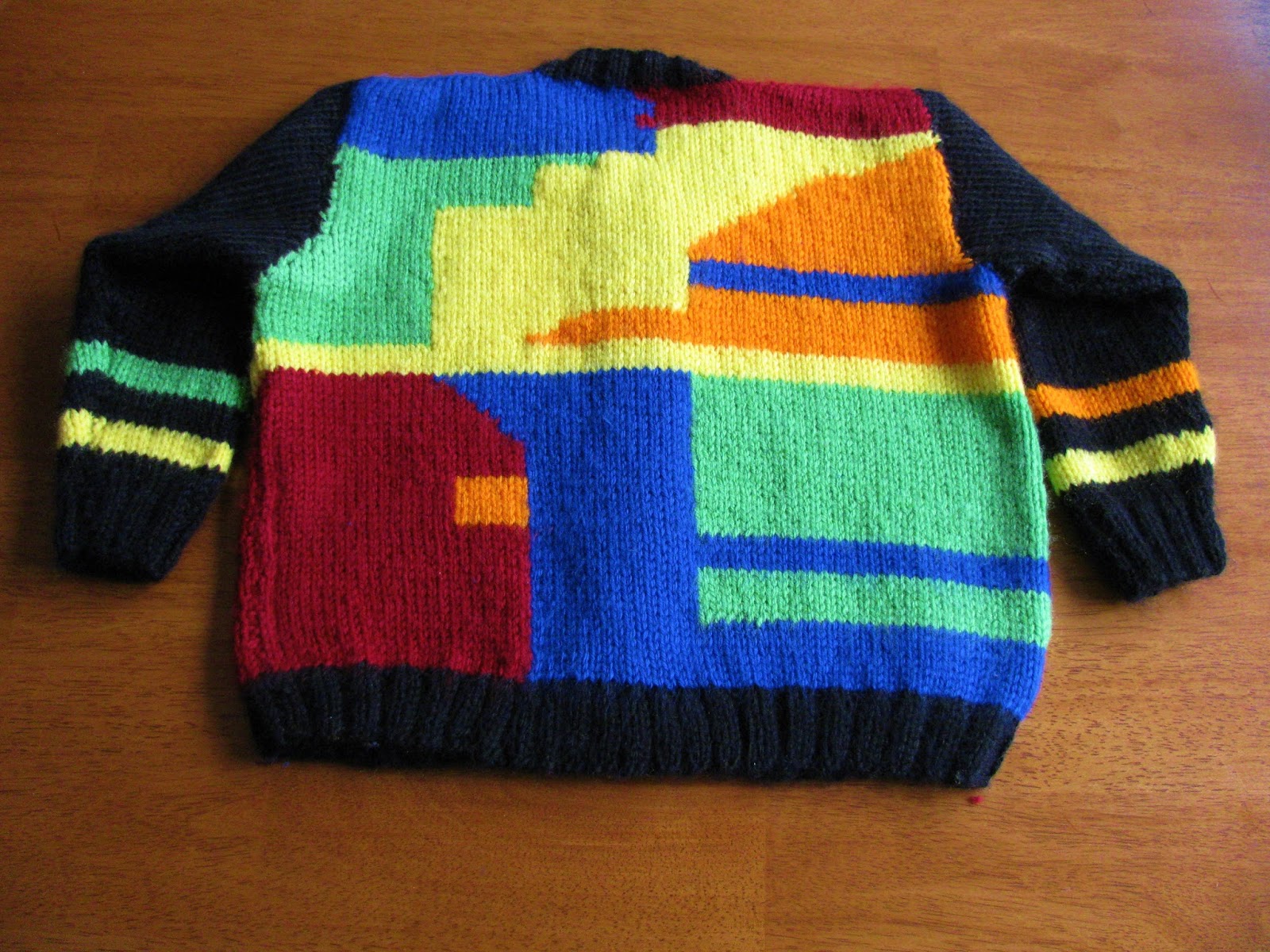 Posted by Misadventures of Widowhood at 5:20 PM