Will This Blog Survive the Move? 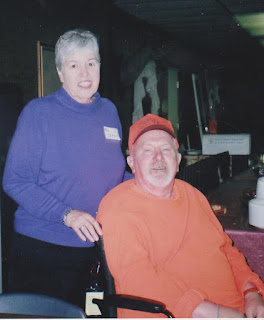 Back when I first started blogging I was a mentor and chat host at a large stroke support website---and I was good at it, worked my way up to being an administrator on the site and was on their board of directors. Then I ran into a woman who proved that I was not good at in-person mentoring. It was a chance encounter and one I brooded about for days. She had challenged my long held belief that I was a fair-minded person. A person who could listen to caregivers or survivors vent or rant or cry or share their joy (or distress) over minuscule improvements and do my best to give them sound and compassionate feedback. But this woman drew me into a pissing contest of sorts by starting our conversation out by telling me I had it easy as a caregiver because I could see what was wrong with my husband.

Her husband’s stroke happened two months before our conversation and he was left with some “personalities issues that kept him from going back to work.” Don’s stroke had been in the rear-view window for three years and it left him right side paralyzed and without verbal or written communications skills. At first I was in mentoring mode by telling her that her husband’s stroke was very recent and things could change a lot in the coming months. “Not likely!” she replied. “He doesn’t try at all.” Again, she told me I had it easy and that second barb torched me off. Ever so sweetly replied, “Just because Don has physical disabilities that can be cataloged with your eyes and ears that doesn’t mean he didn’t also have to go through a grieving process over losing the life style he’d had before. It doesn’t mean he didn’t have to overcome some major impulse control, anger and cognitive issues.”

I’ll cut to the chase here and say it finally came out that she was divorcing her husband because of the stroke and right to the end of our brief but volatile conversation she kept insisting I had it easy compared to her. “My husband can’t work!” she said at one point and I wanted to shout, “Does it look like mine is bringing home a paycheck?” but I bit it back. I don’t do drama in public and she was stuck in self pity mode. Even if I had been wearing my mentoring hat instead of taking her words personally, nothing I said would have registered.

As a mentor I should have remembered that not all marriages are equal and that a crisis in a bad marriage can be the catalyst for a divorce that probably should have happened a long time ago. But instead I turned her rant into a weapon that made me doubt my ability to be my dad’s daughter. He was the fairest-minded person I’ve ever known and I wanted to be just like him when I grow up…if that ever happens, the growing up part. I’m not there yet and I’ve come to accept that I’ll never be as good of a person as my dad was because I’ve elevated him to sainthood. Not that he doesn’t deserve it.

Why am I dredging up the past? I was thinking about the various blogs I’ve had since I started---five in all--- and I'm wondering if this one will survive the move to my next chapter in life. Digging around in my archives I found the post I had written about this woman and thought it's a good example of what my life was like back when I started my first blog. Writing/blogging was my lifeline back in those days. I’d found my tribe. Once I became a widow and I had to make a shift from the stroke support community to another blogging platform, I found another tribe to join.

I don't know what will happen after this next major transition in my life with the move to the continuum care campus. How will I keep blogging without a major, underlying theme going on? With no caregiver or widow's issues to filter my writer's voice through will I gravitate toward writing about aging? Gag me with a spoon. Will my blog just become a depository for my memories? In today's world of search engines and "keywords" can a blog even survive without a theme, a focus that draws people to your pages? Right now, a search engine bringing people to my blog must make them feel like they've been baited and switched because posts with a 'widowed theme' are getting as rare as fur on a frog's toes. (Side note here: I just googled 'frogs with fur' and there is a species in central Africa that has hair! Have I told you lately how much I love Google?)

If you google the phrases "old women who write" and "blogs for older women" you'll get hits so I checked some of them out, thinking I could find my new tribe, a new bloggers platform but they all seem to be blog communicates filled polished articles by and about accomplished older women all doing marvelous, do-good or creative things. Or they are all wanna-be influencers in fashion, beauty, living large or healthier and travel. Me, with my aspirations of being an Erma Bombeck style observer of life and my 'Dear Diary' style of writing just wouldn't fit in. I'm still searching for a place where I might.

Another option would be to give this blog a physical makeover (which scares the crap out of me for fear I'd accidentally delete it all from the face of the earth). Next I could change the mission statement at the top to trick search engines into finding me with my new writing theme---what ever that turns out to be---and I'd have to put some work into networking some more subscribers. Last but not least, maybe I could tweak the blog name to The Misadventures of Widowhood and Moving on. I've got nothing catchier on tap for a title except The [filling-in-the-blank] Senior on the First Floor has been looping around in my head all day and I can't find a good adjective to fill in the blank. Help, it's driving me crazy! ©

There is a thin line that separates laughter and pain, comedy and tragedy, humor and hurt. ~ Erma Bombeck

“Laughter rises out of tragedy when you need it the most, and rewards you for your courage.” ~ Erma Bombeck