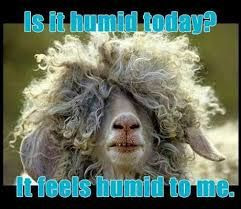 A couple of weeks ago I had tea with a friend I hadn’t seen since before the pandemic and she couldn’t get over how much my hair has changed. She said, “You’re going to get a new man with that sexy hair after you move” and I laughed if off. 1) I don’t want a new man, and 2) there are 52 two women moving into the complex and 10 men and other women in the group with “sexy hair” have faces, bodies and better wardrobes to match their pile of silver waves and bangs that you can hide behind.

I was reminded of that conversation this week when I stopped at the Guy Land Cafeteria to get a bowl of soup and a piece of chocolate pie. There were at least two dozen empty tables in the place but a guy picked a table adjoining mine with a short pony wall in between them and after getting seated he was only two-three feet away, with both of us facing the same direction. Not a bad looking guy for an old duffer. Sandy-gray hair, blue eyes, a well-trimmed mustache but thin where I am not. He commented on the weather. I replied in a friendly manner then went back to writing in my notebook which clearly he didn’t take as a hint that I wasn’t up for mindless chit-chat.

He asked if I’d ever seen the magazine Reminisce. Target audience, older than dirt---my words, not his. Yes, of course I had. It’s filled with photos, short stories and recipes from the 1940s, through the 70s. I had even submitted a few stories that never got printed but I didn’t tell him that. He started reading an article to me about household cures our parents used when we were growing up while I tried to figure out if this guy was just lonely and any warm body to sit near would do or---drum roll, please---was it my sexy hair? I had just washed it that morning and it was all over the place, each wave having a mind of its own and extra silvery shiny because I’m trying to use up a bottle of conditioner before I move.

It’s been so long since I’ve had to decide if someone was flirting with me or just a talkative stranger. Either way he thought I’d be a kindred spirit who likes stories about curing warts and boiling bullets to make a tea to drink to cure something soldiers picked up during the war which I’m assuming wasn’t VD because I’d have remember that. He was having such a good time while I was woofing down my pie and probably leaving a brown ring around my mouth from the speed I was going. I wasn't going to leave that pie behind but I wanted to escape after he asked, “Do you come here often?” which was reminiscence of my barhopping days, a popular pick up line back then right up with “What’s your sign?” and "If I told you that you had a beautiful body, would you hold it against me?" I’d have been happier if I’d been eavesdropped on our conversation because it’s hard to record notes and think of good comebacks at the same time. My chocolate pie finished, I wasted no time in leaving him with my classic goodbye line to just about everyone---man, woman or child: “Nice talking with you.” “You, too,” he replied.

I was out running errands that day picking up more packing boxes and stopping at a place that buys gold and silver. I sold a Ziploc bag of stuff I never wear for $464.00. Some was jewelry I made in college using the lost wax process, the only art class I didn't get an A in so I wasn't sad to see these pieces go. My husband’s class ring, souvenir spoons and some old gifts Don gave me before he finally got the message I don’t like gold are also now on their way to The Great Melting Pot to get reborn.

Sexy hair. And now that my friend planted that phrase in my head she had me wondering if a guy at a future residence meeting yesterday sought me out for my hot hair or if he really did just want to tell me that his wife passed away since I saw him last. Just kidding. The guy was devoted to his wife. She was in the beginning stages of dementia and I always made a point to talk to her about the centerpieces on the tables because she, her husband and I all had extensive experience in the floral industry.

He showed me photos of floral arrangements he’d made for his new unit out of silk flowers. He's a great designer but a few decades out of style unless the sleek, lineal lines are back in style again and I'm the one out of touch. He showed me his new area rug and couch and his decorating style couldn't be more different than mine. I'm all whites to the point of boring if I'm not careful with decorative touches. He's got a red couch and a rug full of primary colored flowers over a black background. He gave me something new thing to shop for though. He found covers for throw pillows for under $10 and I had six throw pillows waiting for my next trip to Goodwill. I pulled three back out of the bag. Amazon's got the best selection but I'm forcing myself to wait until after I move to buy some.

I told him about how hard it was to downsize my collection of flower vases which may prove to be a mistake now that he knows my intention is to have fresh flowers in my apartment as often as possible. If this guy by some twist of cosmic humor starts bringing me flowers to put in my many vases he’d better be bringing them to all the other ladies around us as well or I’ll be pooping canary features and cutting my hair boy short again.

I need to come up with nicknames for my fellow residents starting with him. The Florist is too obvious. Since there are so few guys on campus maybe I'll number them and he can be Guy Two. Guy One has already named himself but that's a story for another day.

Another newbie I met yesterday I may name N.E.F (negative energy field). She's leaving another CCC against her children's strong objections to move into my CCC, probably lowing their inheritance substantially to do so. She no doubt kissed $250,000 away that is non-refundable in places like this. When I asked her what was wrong with the place, she said, "If you're not Dutch, you're not much." Having heard that phrase my entire life, I laughed. I should have had sympathy for her since growing up I experienced the prejudices firsthand from the Dutch Christian Reformers in the area, but I didn't. I felt smug because I did my homework when clearly she didn't. Does that make me a bad person? Hint: When picking out a new community, read their freaking newsletters and mission statements. I made a mental note to avoid her in the future because her Negative Energy Field was draining the sassy-ass, Sexy Hair attitude right out of me.   ©