From Soylent Green to Sunflowers 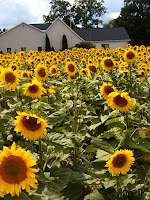 I have totally trashed my garage, digging in boxes brought up from the basement. I’ve been sorting stuff to go to Goodwill, the auction house, to give to family, or to keep a while longer. Piles here and piles there and while I have a system, it would not be readily apparent to anyone just walking through. I’ve made six trips to the auction house, two to Goodwill, one to recycling and have filled my trash container each week since I’ve been on this purging kick. Who knew I’d ever part with my college papers and catalogs, for example? Boohoo, now I don’t have any proof that at one time I was smart enough to pull in a few A’s on papers and tests. I’m quite sure, though, that I threw out many with lower grades, probably shortly after receiving them. If nothing else, I know how to put my best foot forward.

I also had a large box full of index cards with handwritten notes made during slide shows in art history classes. I read a few before throwing them away. It’s hard to believe at one time I had all that knowledge inside my head. Where did it all go? Is it still there in the form of intuition? Oh, I love that painting but I don’t remember why it’s good! Or is all that book learning buried deeply under the other stuff our senses take in over the years---those junk TV shows, movies and books, those run-on days of hacking out a living? Do old memories and knowledge get so compacted in our brains that they look like a Soylent Green wafer, there to nourish our souls but don’t you dare ask how that wafer was made? There are no sacred cows in our brains; if my husband’s stroke taught me anything that was it. Add water a Soylent Green wafer (or blood in the brain) and you never know what you’ll get.

From “my school days” box I saved the very first ‘A’ I got on an English term paper. I got it during my first year of college---quite an accomplishment considering in high school my grades lacked luster. The professor in that English Composition class had a way of teaching that got around my mild dyslexia and she made everything click in place. My niece, who was a special education and reading teacher before retiring, said it was a matter timing: brain changes plus a good teacher coming together at the right time when I was striving to learn. I also kept the very first set of blueprints I ever drew. They were made back in the days when blueprints were actually blue. I’d designed houses before and after that set but, what can I say, I’m sentimental. Your first blue is your first blue. In my case it turned out to be my only blue because the college adviser in my third year of college didn’t think girls should be architects. But I’ve told that story before so I’ll just add this: Thank you, Betty Friedan! Her wake-up call came a little too late for me but I’m so proud of how she changed the landscape for women.

At three o`clock this morning I took a sleeping pill. I missed that window where you feel drowsy enough to fall asleep but for some reason you fight it, then it goes away and you’re wide awake again. My brain wouldn’t turn off! I was thinking about the online auction I followed for several hours that evening as it closed. I had over 40 items in it and it was nerve racking for several reasons: 1) It doesn’t matter if something is worth five cents or five thousand dollars, they start everything out at a dollar; 2) We’ve had some long and wide spread power outages in the area and it’s hard to predict how that affected the bidding; 3) This particular auction house allows you to bid on your own things (not a common practice elsewhere). But the strategy of doing so is tricky and not a game I’m willing to play because the name of the game is to sell stuff, not end up paying commissions on your own stuff because you shot yourself in the foot and ‘won’ it all back; and 4) They have “soft closings” which means if no one has bid on something within five minutes of 9:00, it closes then, but if someone has placed a bid in that time frame, that auction item stays live until no one has bid for five minutes. One of my things, last night, went ninety minutes in overtime. I’ve hear tales about some things going three hours into overtime!

Today I had to go to the bank to sign papers for moving some money around. I hate doing that sort of thing. But on the good side the bank is right next door to the Breakfast Only Café where I ordered my first BLT of the season. Very tasty but my fellow diners were as dull as dishwater, just ordinary people enjoying lunch. On the way home, though, I passed by a field filled with sunflowers. Glorious sunflowers so pretty in the sun that I turned the car around to take few pictures. I hadn’t seen a field of sunflowers since 1999 when I was share-caring my dad and drove the back roads to his cottage in the country. This field is close enough that I could walk there, if I wasn’t addicted to sidewalks. How cool is that! ©
Posted by Misadventures of Widowhood at 4:52 PM