The Widow's Vacation in Saugatuck 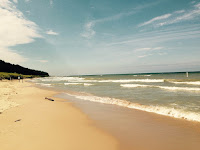 This woman has been on vacation! Yes, a genuine, long-overdue vacation where I packed my bags, put the dog in a kennel and took off for some R & R. I didn’t go far. My niece and I checked into a Bed and Breakfast in my favorite tourist town along Lake Michigan. I’ve been going to Saugatuck since my teens but I’ve never stayed overnight unless you count the times in my late twenties when my husband and I brought sleeping bags over to the beach and fell asleep under the stars. Those were the good old days when we were carefree and didn’t worry about getting caught with our pants down. Literally. (Raise your hand if you think I’ve shared too much information here.)


Our B & B had nine bedrooms with private baths and it was the oldest continuous use residence in town. My room had its original horsehair plaster walls and polished plank flooring with square, blacksmith-made nails and it was named after Susan B. Anthony. She stayed in the same house 136 years ago while she was in town to help organize a local Temperance Union and to give a speech on woman’s suffrage. The local newspaper of the era said “she succeeded in closing six of the fourteen saloons” and “that was a testament to her persuasiveness and organizational skills.” My niece and I tried to find a bar to have a drink in one evening and we only found two open, neither one enticing enough to draw us inside. Susan would be proud that we choose, instead, the only other business open that late---a chocolate and ice cream shop.

We packed a lot into our vacation. After a leisurely breakfast each morning, seated on miss-matched oak chairs at a long farmhouse-style table, we’d take off to do things like: walk the beach, drive the shoreline of Lake Michigan, visit a neighboring town, and browse a few antique venues. We also walked along the marina, strolled a few residential blocks with gardens you can’t truly enjoy just driving by, and we even visited the place at the shore where we spread some of Don's ashes. One night we went to a summer stock production of First Date, a musical that was so funny I had tears running down my cheeks; another night we went to an outdoor concert in the park where we perfected the fine art of people watching. One afternoon we toured a restored 1920s, twenty-five room mansion with a third floor ballroom that was built by the inventor of comptometers, the first commercially successful mechanical calculator. His story was fascinating. Where the lumber industry clear-cut the woods along the lake, he managed to restore the land, stabilizing the shifting dunes with carefully chosen vegetation and now the property is a deep woods again. I wouldn’t have thought that was even possible.

Our Meals: When we first got to town we had lunch at a store-front restaurant with Andy Warhol style murals of Marilyn Monroe and James Dean on the walls. The next day we ate at the oldest structure in the county, originally built as a hotel for traders and people in the lumber industry. I lost my ‘fish tacos virginity' at another place across from where the ferry operates. But my favorite meal of all was when we decided to have dessert instead of lunch at a large pie factory-restaurant. It’s out in the boondocks---in the middle of apple orchards, wine vineyards and blueberry farms. They’d taken a page out of a near-by winery's book and had a pie sampler tray on the menu---various, warm pies served in squatty jelly jars with vanilla bean ice cream on the side. Then there was the day we had ice cream cones for lunch. Yup, I was a bad influence on my niece. But so was she on me. Did I mention her stop to purchase a couple of bottles of wine?

Saugatuck is a town with a history rooted in boat building and lumbering and it’s often called the Art Coast of Michigan because of its 100 year old, 115 acres art colony with ties to The School of the Art Institute of Chicago. The town is a mecca for people from Chicago who spend the summers or boat over on the weekends. A high energy town with a wintertime population of around 1,000 that swells to 3,000 in the summers. My niece and I wondered if my great-great grandfather could have lived in town during its boom town days when he was known to have made his living following the lumber industry around this part of the state. We romanticized him living in our B & B when it was a boarding house for lumberjacks or eating at the hotel where we had dinner. Using our imaginations doesn’t make it fact, though the idea could be an interesting, family genealogy ball to chase for a tenacious researcher.

However, we did get a heavy dose of family history while we were on vacation. Sorting boxes in the basement the week before our trip, I had found six cassette tapes made of my mom and dad talking---circa the early 1970s through 1984. My niece and I listened to half of them in the evenings while drinking wine and munching popcorn. It still blows my mind that tapes made thirty and forty years ago could so clearly bring my parents back into focus. At one point we laughed so hard I actually thought I’d pass out from lack of oxygen; I could feel my face turning red. I suppose you had to be there to understand the humor in hearing my folks say long good-byes to their two dogs. They were dropping them off for me to babysit while they spent the winter in Florida. My niece started prompting them to include me (their daughter) in their “good-byes” and I started prompting them to say “I love you.” The tape ended with me singing a 'lullaby' to the dogs, which reminds me I should erase that embarrassing section.

It was a vacation filled with quality time and memorable moments with one of my favorite people in the world. I crossed a few things off my Bucket List but believe it or not, there are still things on my ‘Saugatuck To-Do List’---like take the chain ferry across the river, ride the paddle boat, visit the art colony, walk the entire length of the boardwalk and I can’t believe we forgot to go to the kitchen gadgets store! I love that place. But for the bonus point of vacationing, when I picked Levi the Mighty Schnauzer up from the kennel it was reported that he had a wonderful time playing with a puppy during the puppy's daycare/socialization sessions and taking part in group obedience classes at night where he was pronounced to be "well behaved and sweet." Levi came home as tired and happy as I did.  ©


Posted by Misadventures of Widowhood at 12:30 AM