Mary, Hillary and the Handyman---Sounds Kinky, Doesn’t it 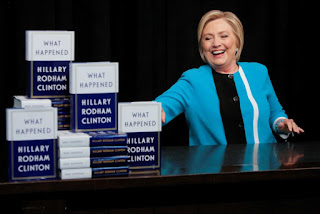 A few months ago I signed up to get Merriam-Webster’s Word-of-the Day delivered to my e-mail box. The idea was to build my vocabulary and I had planned to use a new-to-me word in each blog entry. That didn’t work out. Although I still read, listen to and study each daily word, I’ve only used two of them in my own writing. Today is my third attempt and the word is ‘holus-bolus’ which means “all at once.” The example they gave was this: “If you shout your questions at me holus-bolus, instead of asking them one at a time, then I won't be able to hear any of them.” The minute I read that word I thought of Mary Oliver. I think she’d like ‘holus-bolus.’ I’ve been reading her book titled, A Poetry Handbook: A Prose Guide to Understanding and Writing Poetry.” I bought it because I have a secret desire to write poetry and because everywhere I go lately Mary Oliver’s name shows up. Even Hillary Clinton mentioned Ms. Oliver in her new book, What Happened. (I’m reading both books at the same time. Well, alternately but wouldn’t it be cool if we could read one book with one eye and another book with the other eye? Think how much smarter we’d be if we could maximize our reading time like that.)

Mary’s book starts out with gobbly-goop about the alphabet of familiar sounds. Vowels and consonants and semivowels and mutes. Oh, my! She writes stuff like, “In this run of short i sounds, the i used as part of a diphthong (in ‘their,’ ‘coin,’ ‘eerie,’ and ‘fusion’) is not a part of the assonance proper; neither, of course, is the long i in ‘spinal.’ But the y sound in the word ‘crystal’ is.” If I have to understand gobbly-goop like this I’ll never learn how to write poetry. It doesn’t help that I never learned how to sound out words. Still can’t. But I can still remember the opening line to a poem I wrote in high school: “Oh, how I hate to sit at home and rack my brain to write a poem.”

Hillary’s book is much easier to understand. In the early pages she wrote about how she reread one of her favorite books after the election, The Return of the Prodigal Son. She quotes the author, Henri Nouwen’s, lesson of the parable of the Prodigal Son---“I can choose to be grateful even when my emotions and feelings are still steeped in hurt and resentment. I can choose to speak about goodness and beauty even when my inner eye still looks for someone to accuse or something to call ugly. I can choose to listen to the voices that forgive and to look at the faces that smile even while I still hear words of revenge and see grimaces of hatred.” Hillary says Nouwen’s “discipline of gratitude” to her means that having gratitude for the good things isn’t enough, that’s too easy. She says we need to be grateful for the hard things too because, “in the end, they make us stronger…. My task, “she wrote, “was to be grateful for the humbling experience of losing the presidential election. Humility can be such a painful virtue.” Personally, I don’t know how she ever got out of bed let alone go through the cathartic process of writing a book and going on a book tour.

This week I finally got into the ears, nose and throat doctor. He was running nearly an hour late but it was worth the wait to have him find a ball of gobbly-goop---I love those words---in my ear made up of blood, dead skin and wax. He suctioned it out and wrote me a prescription for ear drops for the infection left behind. Afterward I rushed home to meet with a contractor I found on Home Adviser, a franchised service called Handyman Connections. I had a piece of siding in the peak of my garage, that had fallen off and it required a fifteen foot ladder to put it back on. I only have a two step ladder lest I’d be tempted to do anything farther off the floor than that. He was ten minutes late and he got the job done in fifteen minutes but it could have been done in ten if a family of wasps hadn’t built their nest on the vacated space left behind when the shingle fell off. Ninety-five dollars and I was glad to pay it since two other near-by siding companies I contacted didn’t even bother to respond.

When I think of all the ‘honey-do’ projects like the shingle job that my husband did for us, his mother, my parents, the neighbors and other people who knew he always had the right tools for any job, I realize how under-appreciated he and most handy husbands are. Handyman Connections earned extra bonus points because I didn’t have to nag the guy to get the work done in a timely manner and he picked up after himself and that can’t be said about all handy husbands. What more could I have asked for on a bright, sunny day? Well, I could ask for my husband back but we all know that’s not the way the world of wishes works. (Did I just write an assonance at the end of that last sentence? Mary has me so confused!) ©