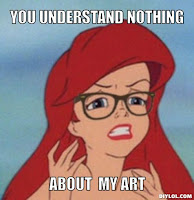 Poor planning on my part left me with an hour and a half to kill in between getting a haircut and The Gathering (for people looking for friends) at the senior hall. It was a beautiful, sunny day and I found myself sitting outside at Starbucks drinking a pumpkin spice latte, eating a bacon, Gouda and egg sandwich and doing my best imitation of a wanna-be writer. My notebook and pen were almost salivating at the prospect of describing a gentleman in his late forties sitting near-by. He was wearing sandals, the palest pink shorts I’ve ever seen---probably once white that had clandestine affair in the washing machine with a red sock---and he paired the shorts with a lavender and blue plaid shirt. His long blonde hair was tucked behind his ears, his sunglasses were perched on the top of his head as he read a hardcover book and sipped on his blended drink. Two girls next to me were talking office politics and I listened for awhile but not so intently that I missed it when lean and lanky Mr. Cool Guy finally closed his book and walked by me. He smiled. I smiled back. It was like being served dessert. As he walked toward his car, in my mind I could hear Travis Tritt singing:

While I was still basking in the aftermath of Mr. Cool Guy’s smile, my nephew’s mother-in-law stopped her Ford next to the railing of Starbucks’ patio and yelled out, “Hi, Jean!” I felt like I’d been caught with my hand in the proverbial cookie jar. Darn it! I wanted to keep thinking about the guy who was self-confident enough to wear pink shorts and carry a hardcover book around in public. I go to Starbucks all the time but that was the first time I’ve ever sat outside and I’d do it more often if I thought “dessert” came with it every time. Was he one of those guys who smiles at everyone or did he instinctively know I was writing about him? If only we had been from the same generation, we could have been a good match. He likes to read. I like to write and I sure could use a proofreader in my life plus I wear enough red clothing that I always have a full load of reds for the washer. No colors and whites have ever accidentally done the hokey-pokey in a batch of my laundry. I’ll put that in my profile should I ever decide to join one of those online dating sites for seniors.

Saturday was another perfect weather day and I had the pleasure of going to an Art in the Park show and having lunch with two of my Gathering Girls friends. It was a juried event with 35 artists showing their pottery, jewelry and visual arts along the river in my adopted hometown. As we looked around a booth with ceramics I picked up a fancy gadget and asked the artist, “Okay, what is it?” and he replied, “A wine bottle stopper.” “Ah, no wonder I didn’t recognize it,” I said, "I don’t drink.” A stranger standing near-by put her hand on my arm and in a tone usually reserved for comforting newly minted widows she said, “I’m so sorry to hear that.” I started laughing and she started apologizing for her sense of humor. I love art shows. They draw some interesting people like the guy who excitedly announced, "Siri is talking in my pocket!" Apparently, she/his phone was answering questions he'd been asking his companion.

At another booth I accidentally insulted an artist...or maybe it was the other way around? I'm not sure. She had a half dozen 3' x 5' canvases (minus their stretchers) hanging on a clothesline. They reminded me of some canvas floor cloths I used to make and that I’ve seen before at art shows. (Canvas floor cloths have been around since colony days, they're the forerunner to linoleum and they come back around from time to time in the decorative arts world.) After the artist in the park told us that her canvases were ready for framing---not!---I asked her if she’s ever turned them into floor cloths. “My dear, these canvases sell for $600! You wouldn’t want to walk on them.”

Her uppity tone made me want to be snippy back at her, but I said, “Floor cloths are protected with layers and layers of varnish.” And I bit my tongue to keep from saying any more. How did she know I wasn't a rich bitch who wouldn't think twice about walking on a $600 throw rug? First rule of sales: don't judge what's in a customer's bank account. I also wanted to point out that I've seen canvas floor cloths go for higher than $600 and that her impressionistic swans were overpriced. But I’m basically a nice person who would no more say that out loud than I would have told Mr. Cool Guy that his smile made me want to shout out, “It’s a great day to be alive!” But I do worry about the day when the filter in my brain wears out and my all thoughts come rolling down my tongue, randomly flattering or insulting strangers in my wake. © 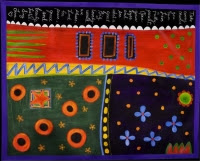 Link to Kathy Cooper's site: Modern Floor Cloth Artist
Posted by Misadventures of Widowhood at 12:30 AM