My Red Hat Society Chapter will be fourteen years old this fall and I was a founding member but two years later I had to drop out because I couldn’t leave my wheelchair bound husband alone for more than two hours and that didn’t mesh well with the out-of-town outings the group was doing. Fast forward to after Don passed away and I found my way back into the group and to this week when I took part in a long standing yearly event…helping the residents of our adopted nursing home become honorary members of our chapter. We bring red visors and bling and marry the visors and bling of their choosing together using our trusty glue guns. Cookies and punch are part of the deal. We also fill holiday goodie bags for all the residents three times a year, do a cupcake and slow motion bingo party in the fall and we have volunteers who rotate memorabilia in and out of a showcase. I’ve never volunteered to do that because, I guess, I’m too picky (or selfish) about where I leave my antiques and collectibles.

Last year I felt too old to be at our visor party, like I could easily be mistaken for one of the resident and as the event got closer this year I gave myself a good scolding lest negativity found a comfortable chair inside my head again. It worked. I went knowing I could do this! I could smile at the guy who took ten cookies off the sugar-free tray but still wanted more when I was passing around the regular cookies. I could be exasperated with the woman who wanted to hoard the whole bag of stick-on bling before it could be passed around to the others. I could laugh at the fact that my chapter sisters all were required to wear rubber gloves to set up the cookie trays but when it came time to pass them out half the residents mauled a number of cookies before making their final choices. As I drove home, I wondered which one I’d be in the future---the cookie hoarder or the bling hoarder? Either way, I hope I’m good natured about it like the guy was. He knew he was doing wrong but he wasn’t going to pass up the opportunity. The woman was a bit of a bitch. If she’d had a fly swatter handy I would have gotten smacked when I got near her.

I got my first estimate on the cost of replacing my roof. It was from the company that did my neighbor’s in one day and they called me cold canvasing the neighborhood. I read through 200 online reviews after making the appointment, most were happy but there were 4-5 people complaining that the company wouldn’t do an estimate without husbands being present with their wives. That explained why the sales rep making the appointment made a point of saying twice, “I’ll see you AND Levi at 2:00.” On my outgoing phone message I say, “You have reached Jean and Levi…” After Don died, I didn’t want my message to give away the fact that I was living alone, so I added the dog’s name when I took my husband’s off the message. The company must have called once when I wasn’t home and assumed Levi was my husband.

After I introduced the guy to my Might Schnauzer the look on his face was priceless and I was prepared for the little-woman-can’t-understand-estimates treatment. I didn’t get it but he did ask if I was related to---and he named my brother. “Yes!” I replied. “How do you know him?” “We did his roof last year. Let’s call him,” he said as he pulled my brother’s contact information up on his phone and put it on speaker. Thankfully, my brother wasn’t home because the last thing I wanted to do is listen to two guys "help me" decide if I should spend $14,400 on a new roof. I am woman. I make my own decisions thank you very much! I decided that what looked like gender bias in the reviews was just the company’s awkwardness in wanting all the legal home owners present so they don’t have to do their presentation twice. Still…. The company has an A+ rating from the Better Business Bureau and while I was prepared not to be won over by the sales pitch, I was impressed enough to keep them in the running.

Yesterday I woke up with snow on the ground but spring supposedly will be here on the weekend. In the meantime, I packed up my knitting in hopes that will signal Mother Nature that’s it’s time to get her tail in gear and bring us some warm weather and tulips. In the past few months I’ve made twenty-eight hats for my family---for next Christmas---although there are four I might do over if I still don’t like them in the fall. My mom made hats for everyone every year and I never appreciated her efforts until I tackled the job this year. I used my mom’s looms and the hats might be a tad out of fashion but with their double thickness they are warmer than bread in a toaster. Darn, now I wish I had some bread in the house! I haven’t had carbs in so long I’m dreaming about them. © 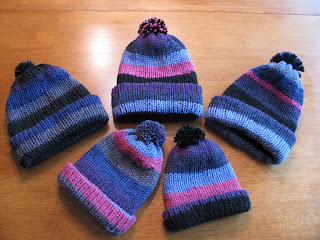 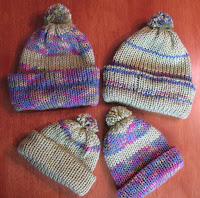 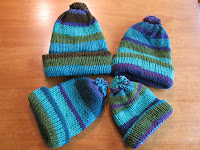 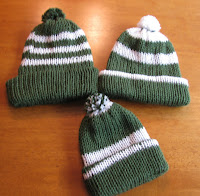 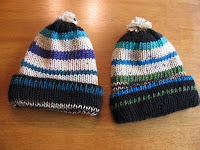 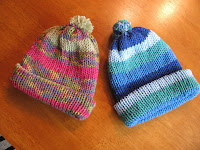