Doctor Happy and the Bunnies and Butterflies 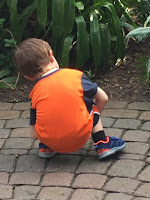 Easter Sunday was noisy here in Levi-the-Mighty-Schnauzer Land where he spent the entire afternoon in voyeur mode watching and barking at four rabbits trying to mate in the back yard. The lady rabbit/s were playing hard-to-get. Every so often I’d let Levi out on the deck and when the rabbits ran by he’d bark and they’d freeze in place like plastic toys on a cake. It was probably the only rest they got all afternoon, it was a regular rodeo back there. I can’t tell the bucks from the does, so in three weeks we could have one, two or three new mom’s making nests in the neighborhood. Most years I get one under my pine trees just 6-7 feet from the dog’s pen. Crazy momma. She’ll sleep in that nest all night long even when Levi goes out to pee and to bark at her from the other side of his white picket fence. In the daytime she’ll leave the babies on their own so she doesn’t draw the attention of predators. I always have to make sure my lawn care guy doesn’t disturb the nest when he puts down the new Pacific Northwest pine needle mulch in May. I know what you’re thinking: Who buys pine needles to put under their pine trees? I’ll try to remember to take a photo when he’s done. It looks so much better than bark mulch under those three trees and along my near-by cattail bog.

For Easter dinner I grilled a steak, steamed some asparagus and had strawberry shortcake and, yes, Levi got a little plate of his own of everything. He especially likes strawberries and when I make protein shakes in the mornings, he’ll come running to the kitchen when he hears the blender where he knows he’ll get a few bites of whatever fruit I’m using that day. I expected my big Easter dinner to show up on the scales Monday morning. It didn’t. I’m saving the traditional Easter ham I bought for later in the week because I didn’t want the salt to show up at the doctor’s office in the form of a higher blood pressure reading and added water retention.

My bi-annual appointment with my internist was Tuesday. The doctor was pleased. I was pleased. Even his young, tag-along student doctor was…well, he couldn’t have cared less. I think he was bored with this old lady with no real problems to solve. I did get permission to go faster on the treadmill as long as I don’t let my heart rate get over 135 on my Fitbit---like I could actually go faster than the 1.35 miles in 30 minutes that I’m already doing. I was glad the doctor thinks doing the treadmill a half hour 2-3 times a week is ideal, that I don’t need to walk longer, just a tad faster, if I can work up to it, using my heart rate as my guide. He also said that strength training and exercise is more important at my age than at any other time in our lives.

The day before Easter I got to spend time with eleven members of my family---me being the oldest person there and the youngest one is just a few months old. We met at our local sculpture garden to see the Butterflies are Blooming exhibit in the tropical conservatory. We were there all morning and the baby woke up just once to nurse but otherwise slept contentedly in one of those baby slings that keeps babies close to their mother’s stomach and chest. Why did it take so long for those slings to get popular in modern society? Indigenous people all over the world have been using them since way back when the earth was still thought to be flat. The two, two year olds with us took quite an interest in the butterflies. It was fun watching their faces light up and it was heart-warming when Little O held my hand for the first time. Until now, he’s been standoffish to me, the little girl is just the opposite. I don’t know how to interact with children anymore like I did back when my nieces and nephew were young, but I don’t see these kids often enough to re-learn. Big sigh of regret here.

I started going to the butterfly exhibit after my husband died as a life-affirming pilgrimage around all of my April sadiversaries, then last year when my youngest niece heard that I was going she wanted to meet me there. Five of us went last year and that grew to eleven this year. I’m hoping we’ve started a tradition that will last a while. The park is huge with lots of things for kids to do as they grow older. For me, I don’t think I’ll ever lose my fascination of seeing thousands of butterflies all in one place and I still haven’t gone after dark to one of their butterflies and flashlights events. The exhibit has the power to slow us down to pay closer attention to our environment---the sun patterns through the foliage, the kaleidoscope of colored flowers that draws the butterflies to land and the warmth of the conservatory that previews what’s to come outside as April creeps forward into May. And of course, the amazing and mysterious cycle of chrysalises and cocoons that turn into beautiful creatures that live for such a short time but while they’re here they do their work in making sure their species continues. Life affirming. Oh, yes! ©