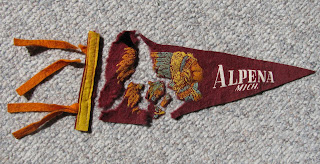 Levi, my Mighty Schnauzer got himself in trouble---the destroy-something-that-wasn’t-his kind of trouble which is rare for him. In fact, other than toilet paper that he still occasionally loves to grab out of my hand seconds before I can use it, I can’t remember the last time he took something that wasn’t expressly his. Nope, his stuff he gets to pick out at the pet store and bring home where it ends up in his toy box or bed. Everything else in the house is my stuff, off limits. When I found the evidence that he’d somehow gotten a felt, 1940s tourist souvenir pennant off a bookcase to pull apart beyond repair I screamed, “Bad boy! Did you do that? BAD BOY! Go get in your cage!” When I’m mad the last place he wants to go is in his cage so he pretends I said instead, “Go get in your chair!” Too often I let him get away with that but not this time. I picked up all 29 pounds of him and carried him to his cage and I swung the door to within two inches of it actually being closed. I never lock him in his cage for fear I’ll die while he’s in there and he’ll starve to death before we’re found. Time outs in the cage don’t usually last longer than fifteen minutes---the penalty for excessive barking---but this time it was an hour before I said, “You’re free” aka you’re forgiven.

Afterward, I thought about how easily I was able to pick him up and carry him across the house. I am definitely getting stronger! I couldn’t have done that a month ago; I would have dragged him by the collar part of the way. But my house is starting to look like a gym. I hauled my Schwinn exercise bike out of the garage and into the living room. I haven’t actually ridden it yet but I huffed and puffed it into three different locations and I’m about ready to take it back out to the garage. I suppose that shows that I care more about how my house looks than my body? Still, a hand bike sits on my dining room table along with two sets of dumbbells, and a rubber stretch band with handles for punching and pulling is attached to the top of the door leading to the porch. And last week I bought a balance board. They say you can’t get hurt falling off a balance board---it’s only three inches off the ground---but I don’t trust that so I use it in the bathroom where I’ve got safety bars to grab. Ankle strength and balance are the most important things for elderly people to work on because it prevents falls. Yadda, yadda, yadda. I can’t even stay on the balance board for a full minute. Yet.

I’ll try not to fill up my blog up with gym stories but it’s hard not to since I’m still obsessed with going and probably will be until after I see my doctor in two weeks. But something happened that triggered a memory of a friend of my husbands who was a weightlifter. He saw a pair of antique, two pound dumbbells that I was using and he was aghast that something that light weight could do any good. Twenty-five years later he was still teasing me about me lifting a whole two pounds. I thought of him when I was working out at the Synrgy360 recently at the YMCA. It’s a multi-purpose strength training station set up like the spokes of a wheel that six people at a time can use. I was doing cable pulls for building biceps and right next to me was a tree of a guy with a very fine…and I do mean VERY fine weightlifter’s body and he was pulling and grunting and groaning with the same intensity that I was. The idea is to pull 15 times then take a short break to reset your muscles then do two more sets. When it gets easy, you add more weight. On a break I added another two pounds to the eighteen I was pulling and I glanced over to see what the Tree was pulling. Ninety-five pounds. At the same time he glanced over to see how much weight I was adding on. Our eyes met, both caught in the act of being nosy, and we both burst out laughing.

Monday I went out to lunch with four ladies from The Gathering (for people looking for friends). And afterward we went to a place that calls itself an antique and artisan market. It’s huge with 125 vendors selling everything from up-cycling and crafts to a few antiques and a lot of antique wanna be’s. One of the ladies opened a booth there in January, her first anywhere and she’s having fun downsizing her life. It was our second outing and like the first one, we Gathering Girls got along great and laughed a lot. After the next official Gathering at the senior hall we’ll plan our third unofficial outing. If we keep this up, by the end of summer we’ll be bonded girls, not to be confused with Bond Girls. Ohmygod, I googled the James Bond’s films and I just got the double meaning of two of the earliest Bond Girls---Honey Ryder and Pussy Galore! I was so naïve back in the early ‘60s when I saw my first Bond movies. Stick a finger down my throat, I hated those movies but I was too mousy to say so back during my dates days. I saw Goldfinger three times with three different guys. ©