Friends who Read Blogs and the Mom I Still Miss 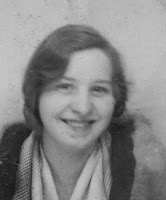 I have a curious friend who knows I have a blog but she isn’t very computer literate which translates to she can’t find it and she’s tried. Several times when the topic has come up I’ve jokingly said, “If I told you how to find it, I’d have to kill you.” I debate in my head whether or not I should just give her the web address. I can count on the fingers of one hand the number of people in my off-line life who read my blog and I like it that way because it frees me to write without the temptation to white wash my words to square with the filtered person I frequently show to the world away from my keyboard. I trust these five people to still like me even after reading my deepest thoughts. And more importantly, I trust them not to tattle on me if I write about someone we both know.

The year that Don died, I did put the web address in my Christmas letter but to my knowledge only three out of all the people on my mailing list ever stopped by. I get that. I really do. Mostly, it’s other widows who are interested in how newbie widows are handling that first year. And by the time I turned into a seasoned widow who was no longer fluctuating between crying in my beer and being the brave little trooper I came to appreciate the advantages of keeping my online and offline lives separate. That probably explains why my petty inner child is not keen on inviting my curious friend to my blog. My inner child can be quite bullheaded, a word my mother used often to describe me when I was growing up. Bullheadedness in childhood can turn into a useful tool in adulthood. If Mom were here now I’d point out that being bullheaded/persistent, if channeled in the right direction, gets things done. Sticks and stones can hurt your bones but words can never hurt you---unless it’s your mom drilling them into your head.

I don’t write about my mother often. She was a complicated person and I’m afraid I won’t be able to do her justice. She could be a tough disciplinarian and if I lingered too long on that point you’d get the impression she was a hard woman. For example, if I didn’t do the dishes before rushing out to have fun I’d find them piled in my bed to do before I could go to sleep at night. But if I told you she was affectionate with her family and compassionate with others in bad situations, you’d rightly get the impression she had a warm and loving nature. Case in point: whenever my uncle drank too much and gambled away his paycheck my mom slipped her sister money to help feed their kids. At Mom’s funeral I heard similar stories of her quietly helping others. But if I told you my mother was always squirreling money away for rainy days you’d get the impression she was a miser. When she died we had to check the pockets in all her clothes before donating them.

To understand my mom it helps to know that her own mother died after giving birth to my mom’s sixth sibling. She was ten years old and after that all the kids got shuffled off to live with other families across several counties. Mom, being the second born and deemed old enough to work, was sent off to earn her keep at her grandmother’s boarding house. She would tell a story about how all the tablespoons in the house would disappear when meals were made because her grandmother would taste something on the stove, then drop the spoon into the pot. She’d repeat that over and over again and all the spoons would come clinking out when the food was plated. By her early teens Mom had dropped out of school and was working first as a live-in housekeeper, then as a waitress living on her own in a rented room. Her dad would stop by the restaurant regularly to ask her for money. He drank away his widower’s grief until he drank so much he turned into an alcoholic.

Mom married my dad when she was twenty-six years old and she didn’t talk much about those years when she was out on her own. But I do know that all that time working as a waitress turned her militantly against the system of tipping in restaurants. She thought if we did away with tipping the restaurants would have to pay fair wages. A woman could work her fingers to the bones taking care of a lot of customers, she said, but it was the flirty waitresses with big breasts who made the most money. A couple of times I saw Mom sneak part of the tip money off the table that my dad would leave behind. Bad service? Flirty waitresses? Rainy day fund running low? Your guess is as good as mine.

Mothers and daughters have unique relationships and I leave it to others who knew us both to decide if I’m anything like my mom. One thing I know for sure is she did her best to see that my brother and I had the opportunity to pursue whatever after school activity that we showed an interest in. She was the leader of my Blue Birds, Camp Fire and Horizon Clubs, she volunteered to help on school field trips and was determined I would get a college education. My mom also knitted and crocheted beautifully and played records when she was home alone. The only “mother thing” she didn’t accomplish was to teach me how to cook and that we can chalk that up to me being too bullheaded to learn. She died on an Easter Day in the early ‘80s and while Easter changes dates every year I associate the holiday with losing and still missing her. And it should be noted here that my brother and I still argue over who Mom loved the best.  ©

Photo at the top: My Mom (age 30) and I (age 2 weeks old) on the day we were released from the hospital, and that's my brother. 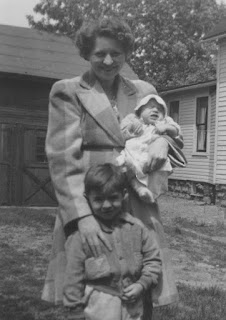