From Walls of Sorrow to Freedom of Speech 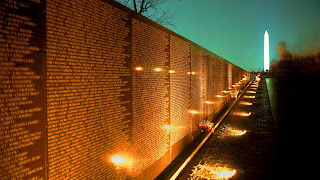 I was in the house with the windows closed and the air conditioner going when I heard a thunderous roar that I couldn’t identify. After checking around the house, I went out my front door where I could see the road leading to the baseball park. It was filled with motorcycle riders, their rolling rumble piercing my ears. Over two hundred, I read later. They were the escort riders for the Wall That Heals, the mobile exhibit that would be in town for the next four days. It’s a 250 foot, ½ scale replica of the Vietnam Veterans Memorial Wall on the National Mall in D.C. and its 24 panels contain more than 58,000 names of those who didn’t make it home. I’ve seen the actual Wall in Washington D.C. and it was an emotional experience. I had penpal relationships with over fifty guys over in ‘Nam spread out over four-five years and I tried to look them up in the index book by the Wall, but after finding a few listed I just couldn’t continue. It was too haunting and hard. I left behind a poem I wrote, tucked in a seam between two panels of the Wall. A very dark poem filled with unspeakable pain about one of those penpals who I had met in person and who nearly destroyed me.

The traveling replica was in our state once before and Don and I went to see it. This time it was my husband who left haunted by the experience. At the very end of the 24th panel was a homemade sign on a stake that contained the name of a friend of Don's. It said he’d died of Agent Orange. This was in the ‘90s, just after our government finally got around to acknowledging the connection between Agent Orange and all the medical problems the guys who were exposed to those chemicals suffered. My husband’s friend had taken his own life just weeks before his wife placed that hand-painted sign at the replica Wall. He was a good guy, a guy who endured too much pain to stick around.

This week, when I heard the mobile Wall was going to be in the neighborhood I thought about going. I decided against it but the thunderous roar of the escort riders gave my mind’s eye perfect recall of the emotions that I didn’t want to revisit. You’d think after fifty years the edges of darkness would be dulled down, you’d think by now I could tell my story, the one in the poem I left behind in D.C. But I can’t. I’m not unique. Everyone who goes to ‘The Wall’ has a story of regrets, sorrows and what-ifs---many, like mine, are still held close to the vest.

When the Wall That Heals caravan reached the field where the Wall would be displayed a ceremony took place that included four vintage airplanes flying over my neighborhood. A relative put a video of them on Facebook circling around the field, thick streaks of smoke trailing behind them. I saw them when they passed over my house in close formation before they started their tribute. They made me sad but my nephew-in-law who posted the video commented that he was “honored to see them.” The Vietnam War ended before he was old enough to get drafted but the war was the backdrop to his entire childhood. He’s also an avid Trump supporter.

Civil War Union Army General William T. Sherman is noted for saying, "I am tired and sick of war. Its glory is all moonshine. It is only those who have neither fired a shot nor heard the shrieks and groans of the wounded who cry aloud for blood, more vengeance, more desolation. War is hell." Yet here we are again, this time teetering on the edge of a nuclear war. And why? Because two bullies are itching to have a quick draw contest to see who has the biggest dick? If they don’t ratchet the rhetoric down, the next memorial wall we build will have the names of those lost to a nuclear war and its fallout and it might be long enough to double as Trump’s border wall.

I have mixed feelings on what it means to be patriotic in the year 2017. How can anyone claim to honor the flag and fallen soldiers and at the same time support a president who doesn’t respect free speech? We fought a war to cement that cornerstone into our Constitution. We are in dangerous territory with this president! He demonizes the press at every opportunity, then this past weekend it was six black athletes who were taking a knee in peaceful protest during the national anthem that he labeled "son-of-a-bitches" and called for boycotting the NFL until they are fired. Trump seems bent on dividing us, starting a culture war. We don’t have to like or agree with the point those athletes are trying to make about racial injustices but it is important that we all understand it’s their First Amendment right to dissent. Countries that demand total respect for their flags and anthems are call dictatorships. What comes after threats of getting fired? Jail time? A bullet in the head? What would Kim Jong-un do? What would an unfettered Trump do?

Taking a knee in peaceful protest historically goes back to Martin Luther King Jr. in the ‘60s. And have we forgotten Hall-of-Famer baseball legend Jackie Robinson? He didn’t kneel but as he wrote in his autobiography, "I cannot stand and sing the anthem. I cannot salute the flag; I know that I am a black man in a white world." Times have changed since 1947 when he broke the color barrier in baseball but anyone who thinks that Lady Justice is color blind in 2017 is lying to themselves. I doubt Trump cares about the kneeling as much as he cares about distracting everyone from his ineptness in office. ©

“When fascism comes to America, it will be wrapped in the flag and carrying a cross.”
James Waterman Wise
1936, The Christian Century 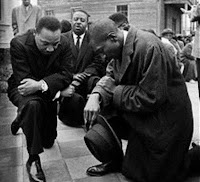 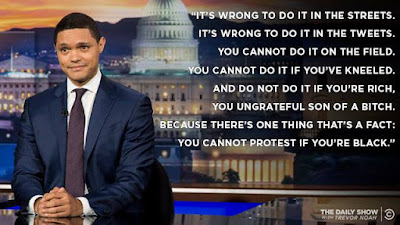