Come In! Come In! 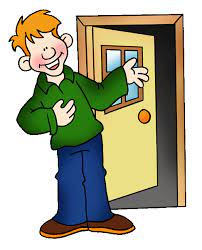 What do you do when friends or relatives you’re not expecting come to your door? Same question only change the person standing on your doorstep to a neighbor. Or what about a stranger who may be looking for help or a donation? My husband and I never agreed on what was the proper protocol in these situations. He thought my way was wrong, I thought the same about his way. He believed in saying, “Come in! Come in” to nearly everyone. I’m more the wait-and-see-what-they-want-first type.

Don was raised in the country on a farm with no close neighbors and he was brought up in a family that apparently believed that if someone came all that way out to see you or to buy eggs or to sell you something or talk religion that you welcomed them into your home. Even if you didn’t want to, you’d drop what you’re doing and let them monopolize your time. He and his dad also genuinely loved talking to people or to use Don’s words, they loved "shooting the shit.” Side note here: I’ve never liked that phase and it surprised me that it's been in use longer than I though. According to Dictionary.com shoot the shit comes down from 'shoot the breeze' which was first "recorded in a poem written during World War I by a US private, who described his corporals as sociable men who were much better at ‘breeze-shooting’ than fighting or doing actual work. It doesn’t require much skill or effort to hit the wind with a gun, so the expression goes. Shoot the shit emerged in the 1940s, notably found in a letter by the author Norman Mailer.”

Coming up from the 'shoot the shit' rabbit hole, I’m back on topic again to the days when Don and I both had our own houses. Don would drive me crazy by allowing all his bored neighbors to walk in his front door to “shoot the shit” any old time they wanted, eating up a bunch of time that would put him in a bad mood because then he’d be behind on things he needed to do or they'd make him late for something. He was notoriously late. He had several neighbors who’d head over to his house the minute he’d drive in, not even giving him enough time to pee before he’d be expecting him to answer the door and let them in. They all knew he worked nights but they couldn't seem to grasp the concept of him needing to sleep in during the day. Once I suggested he post a 'Do Not Disturb' sign on the door when he went to bed. He couldn't bring himself to do it. Instead, when he was really sleep deprived he'd come to my house straight from work to hop in my bed with my dog curled under his arm like a teddy bear.

I was raised differently. When someone showed up on my doorstep (or at his and I was the one opening the door) I never stood back and let just anyone walk in. Family and close friends, sure, but they generally knew enough to call and ask if I was up to company and they rarely dropped by unannounced. My catch phase has always been, “Stop over sometime, just call first and give me a fifteen minute warning." I say it in a joking manner but I'm dead serious. And I always make sure I give others the same notice if I want to stop by their place, so they could take their choice of tidying up the house or their appearance or to tell me it isn’t a good time for one reason or another. For me, it was usually the house that gets picked up rather than fuss with my looks in front of a mirror. This whole topic ran through my head today because a person buying something on Facebook Market Place sent a text asking if they could come over Right Now. I lied and asked if they could give me a half hour, that I was just getting lunch on the table. There was no lunch. I wasn’t dressed yet.

But when neighbors came to the door in the old neighborhood I’d waited to see what they wanted before allowing them inside. It used to drive my husband crazy when I'd be in "guard dog mode." I just couldn’t see letting bored people come inside and park them selves in the living room for the long haul if we were getting ready to go out. If they only came over to borrow something, no problem. A cup of sugar? “Sure let me get that for your.” Borrow the vacuum for the fifth Tuesday in a row? “Last time, lady. It’s time you buy your own.” (They never did, they'd just hit up another neighbor.) We had minimalists living next door before they even had a name for people who penny-pinched then bragged about how cheaply they can live. They didn’t own any of their own necessities for keeping a home or car clean and maintained. Nothing. Ya, I would let anyone use my clothes dryer if theirs broke in the middle of doing laundry but don’t expect to use my washer/dryer routinely week after week. Minimalists neighbors will eat up the life of your appliances and power tools if you let them.

One of my future neighbors is apparently worried about living in such close contact with others. She made a comment at a meeting we had recently about hoping we can all use the public areas for our visiting and "not drop in on each other at all hours of the day and night. I like my privacy!” That made me laugh. My husband would have blown a gasket if I had made that statement. I suspect my future neighbors are going to give me plenty of blog fodder. The bigger question to ponder, though, is when someone knocks on my door will I throw it wide open and issue a good ol' country-boy "Come in, come in!" or will I stay true to my city-girl roots and wait to see why they are there first before inviting someone inside? Want to make an educated guess? Okay, that was a rhetorical question, no need to weigh in on whether I'd lick a neighbor's face or bite it off if they stopped by some evening with a bottle of wine or a bunch of gossip up their sleeve. ©