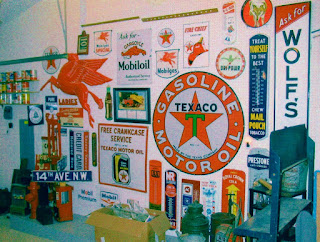 Have you ever felt so happy and light-hearted that you keep looking behind you to see if you’re farting rainbows and puppy dogs? Me neither but I came close today. The euphoric lift in my caboose might not have come from leaving a trail of puppies in my wake but I swear there’s a rainbow following me around and before you ask, it smells just like wet grass and cotton candy---strawberry cotton candy and good old, Kentucky bluegrass. To be honest the scent in the air is probably coming from the neighbor who is mowing his lawn and I have a Dutch Rusk smeared with strawberry jam sitting next to my keyboard. Ya, in my world I have the super powers of a five year old girl. If a rabbit was in my view right now my imagination would turn him into a unicorn. That said, I just used 148 words of my 1,000 word quota to convey that I’m having a great day.

What brought on this happy mood? Simple. Yesterday the son-I-wish-I-had spent a couple of hours helping me clean my garage and now there is nothing left out there to purge before I get the house whipped into shape for the listing. When Tim drove off with his trailer loaded with my stuff he also took a lot of my stress with him. What was in the trailer? He took---bought actually---five large metal cabinets that filled up one wall; three large boxes of e-Bay shipping supplies (he does e-Bay too); five long tables from the days when Don and I were vendors at swap meets (four more will go later on); a snow blower plus driveway salt and snow shovels; two vintage 20 gallon metal ice cream drums that I was using to hold tools with long handles; an assortment of tools like a roof rake, shovels and gardening tools; a box of wood scraps; and several full sheets of Masonite that I used to create a ‘bull pen’ for my shipping activities.

There were things in that load Tim hauled away that I could have tried to sell on Facebook Marketplace like the snow blower but even though it was in mint condition I figured no one would buy it this time of the year, however the e-Bay supplies would have been an easy sale. But I screwed up with the vintage ice cream drums. I should have looked up their value before giving them to Tim who, by the way, was elated to get them. He said he’s wanted them for years and I realized too late that I lost an opportunity for a $100 barter. It’s what we do. We barter and with the move coming up I’m going to be on the bottom side of our little game. Still, it turned out great this week. He moved a bird bath in the yard for better drive-by appeal, helped me in the garage, was great company and at the end I owed him $100 for his labor and he owed me $125 for the cabinets and $12 for twelve Rubbermaid boxes. (I've probably got 40 more empty Rubbermaid boxes to clean up and use for packing up the house for the move, after which Tim is barter/buying them all.) 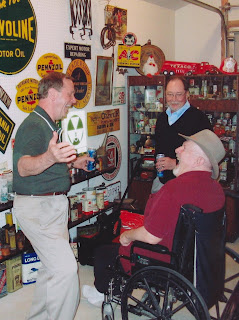 The garage is only 90% ready for photo day but it makes sense as a garage again. I could park four small cars in there now or a RV and two cars. A 24 foot sail boat would fit or a pop-up van with a wheelchair lift and ramp like we had in the oversized space. There’s more square footage in that garage than in the place I'm moving into. One guy who came to pick up a Marketplace purchase took one look at the vaulted ceiling, showroom lighting and finished wall with miles of pegboard and said, “Wow! I could live in this garage!”  In other words, it’s a guy’s dream garage which I’m hoping will help sell the house because the kitchen is not a woman's dream kitchen. It's too small by today's standards and not an inch of granite or stainless steal to be seen.

When my husband was alive 2/3 of the garage was his show-and-tell space for his Classic Corvette and all his gas & oil collectibles---restored gas pumps from the 1920s, porcelain signs, tall glass oil bottles and metal cans. We also had a showcase of “smalls” which in gas & oil collector’s circles means we had everything that gas stations once gave away for promotionals. We specialized in Smalls when we had booths in several antique malls and would do swap meets out of state in the summers.

In the first two summers after Don died, Tim and I systematically e-Bayed all of Don’s collection. Tim sold the pumps, globes, larger signs---things we knew would sell for big bucks---and I sold the rest. We did it that way because he was taking a 30% commission out of anything he sold and with cheaper things it wasn’t worth his effort. Paying him that 30% was well worth it because he covered the e-Bay fees and handled all the shipping and pickups which was no small feat to arrange on those old gas pumps and globes. Those two summers our e-Bay accounts were both going hot and heavy. And now, for the first time since I’ve lived here, my garage is just a garage. OH HAPPY DAYS!

The photo below is of the one-piece, hand painted Musgo gas globe and it was Don's pride and joy. When he first offered $5,000 for it and let the seller work him up the $7,000 I thought they were both crazy. But fast forward 15 years and his investment sold for $20,000 (minus Tim's $2,000 broker's fee for arranging the private sale to another collector) which in turn helped me pay off my mortgage early. Now, there are three piece reproductions on the market which always drives the prices down on the originals. I sold it at the right time. I've always hated having large sums of money invested in breakable antiques and I was glad to get the Musgo out of the house, having once broke a $4,000 globe just packing it up to take to swap meet. My husband wasn't even mad. "Why aren't you yelling at me?" I asked. "Why should I?" he replied, "You feel bad enough for both of us." 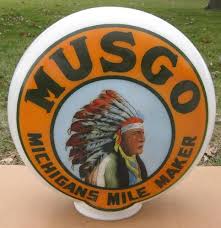 All traces of its former uses are gone from my garage and my life is about to change, leaving behind my wheeling and dealing memories. And there are a lot of memories involved. My husband was the up-front man who bought and sold the stuff but I'm the one who worked behind the scenes cleaning, polishing and pricing it all. I'm the one who did the packing and unpacking for shows and the mall restocking and who single-handedly hung it all in our garage after Don's stroke, then I e-Bayed it after he died not to mention I was with him when he bought most of that stuff.

Now, I'm looking forward to getting re-acquainted with that five year old girl who lives inside of me and who wants nothing more than to pretend I'm about to move into a tiny cottage near a lake where I'll be free to paint and write all day long, occasionally looking over my shoulder to see if I'm leaving a trail of rainbows and puppy dogs in my wake. ©

Photo Notes: The top photo is of one wall as it looked when my husband was a live but I can't find a digital photo of the wall of the gas pumps and globes, and I don't have the time to deal with finding a print copy to scan. The center photo is of my husband (in the wheelchair) and a good friend (to the left) and his friend's brother who is standing in front of the showcase of Smalls.