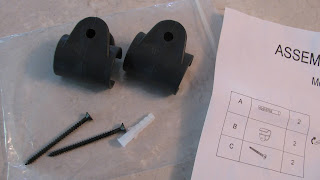 Remember the bistro set I bought where the online company selling it gave me two different answers when I messaged them about the color? Well, that should have given me a clue that their right hand doesn’t know what their left hand is doing. When the huge box arrived I carefully unpacked it, checked for damage and to make sure the bag of parts matched up to that was listed on the instruction sheet. It didn't. It was missing a one inch plastic part.

Step One: I filled out a form on the website about the missing part and sent the above photo with the form and I got a message back that they are sending me a whole new bistro set. Thinking I somehow screwed up and somehow ordered another set instead of a one inch part, I called them and was told that the manufacture no longer has those little one inch parts available and they’ve authorized Wayfair to issue a full refund and I can go to a place like Lowe's or Home Depot and find a part that will work. Supposedly the screws and plastic receptors are interchangeable with others that are out there to get the job done. That would have been a needle-in-the-haystack kind of shopping trip but it did look do-able. The help desk lady said the refund was already issued to my credit card account and that I could send them a copy of the receipt for a new part and they would reimburse me. I checked my credit card account online and sure enough, the refund was there and I was getting a free bistro set minus a little thingamajig.

Step Two: I got a phone call from Wayfair a few days later. “Good news!” the guy said. "A new part is on the way."  Great, I thought, that saves me a shopping trip.

Step Three: Three days later a whole new bistro set showed up on my doorstep! And no, I didn't get a charge added onto my credit card for the second set. But the refund for the first table set was rescinded.

Step Four: I called Wayfair back up and told them that I was expecting a one inch plastic part and a whole new bistro set arrived and, “How do I send it back?” She was very nice and she told me that this was the way the manufacture wanted to handle the missing part. I’m to keep the second set and I have one of two choices I can do with the first set: Either donate it or I can ship it back to Wayfair at my own expense. This box is 42” x 28” x 10” and I’ve shipped enough e-Bay stuff over the past two years to know that box wasn’t going to ship cheaply. “I did nothing wrong," I told her, "and I’m not shipping it back if I have to pay the freight!” The help desk representative was very nice---again---and said it was my choice to make. "Wayfair does not weigh in on your choice." So I have a huge box in my living room waiting to be unpacked to make sure the parts are all there and a partially empty box sitting in my garage while its table is leaning against my library wall.

Step Five: I got to looking at that table and where the two identical parts are supposed to go on the table and for the life of me I can’t see what possible function them preform. The screws and plastic parts they screw into attaches two plastic clamps around a bar and the plastic clamps don’t make contact with any other part on the table when it’s set up or when it’s folded up. The clamps do not hold anything together, do not protect anything and the table works perfectly as is without them. I checked to make sure the diagram and bag of parts matches the stock number of the table and they do and the diagram shows exactly where the stupid parts are supposed to go which is not a place important to it's function, strength or structure. So now I’ve got two tables waiting for the son-I-wish-I-had, who is coming next week to help empty out my garage, to see if he can see something I’m missing on why those clamps are even needed.

Step Six: Once that mystery is solved I’ve decided I’ll enjoy one bistro set this summer on my side deck and for staging the house, and leave the other one packed for the move. Then when I leave here I’ll either donate, sell or give away the set I've used over the summer or leave it behind for the new owner…whatever suits me best at the time.

Edit to Add: Step Seven - written a few days after writing the other steps: I just got an e-mail from Wayfair asking if I knew that I could donate the set to Habitat for Humanity and they will pick it up, which, the email said, "would save me the inconvenience of donating it elsewhere." They didn't say it but Wayfair probably gets a tax write off if I do use the Habitat link they sent me, which I'm sure works better dollar wise for them than paying for return shipping. So now I have to new decision to make: Be selfish and stick with Step six or arrange for a Habitat pick up. I'm strongly leaning toward the latter choice but I'll still fish the bag of parts out of the new box, then remove the one inch plastic part that neither Habitat or I will need and return the bag where I found it. Why bother, you ask? Just to keep the records matching on this saga. I'm not taking any chances in case Habitat reports back to Wayfair that the part was there all along, since it was the first box I was supposed to donate. (It took a long time to unpack that first book to check for damages and I'm not doing it for the second box.)

Step Eight: I just tried to schedule a pickup on the bistro set with Habitat for Humanity and because of Covid they are not scheduling any pickups until after August 3rd! By then I'll have the house on the market and I can't leave that great big box sitting in my living room which is where it will have to sit until Tim comes over to move it into the garage!

Edit to add Sept Nine: Tim came by, looked over the part in question and agrees that the clamp-like part and the missing one inch plastic part services absolutely no purpose. And since Wayfair didn't say I HAD to donate it to Habitat---they just said, "Do you know that if you wish to donate the item, Habitat for Humanity makes donating easy?"---I gave the bistro set to Tim for his cottage because by then I was thoroughly exhausted over being on this nearly two weeks long online shopping merry-go-around. Now the second set is history and the first is packed back up and waiting for the move!

I’m just glad this saga happened before I ordered the computer desk I’ve had my eye on that comes all in parts---lots of parts with lots of screws and nuts that they estimate takes three hours to put together. I have since been out to the Amish Oak store and they priced out a desk that came in under $1,700 including shipping. I fell in love with the white-washed finish on the oak that they didn’t have back when I was bought my kitchen table and chairs at that store. Unfortunate, after making a scale model of the desk and moving it around on my blueprint I discovered it's too big for my space so I have to start all over again pricing out a smaller, custom desk, which I can do when I go back to pick up the chair I left for repair. But I’m confident I can get a desk (that doesn’t come in pieces and is made out of real wood) and if I have to work on a card able for a while waiting for it to be built, it will be worth it. I've bought a lot of furniture from that Amish Oak store over the past two decades and ©