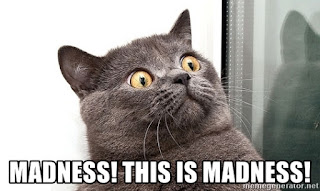 The month of May might be known for bringing flowers but at my house it also brings the dog’s yearly vet appointment to get caught up on his shots/vaccines and to get the ‘diet talk’ about him needing to loss a pound or two. Doctors are all the same, aren’t they. In Levi’s case the vet talk usually goes something like this: “One pound will lead to two pounds and pretty soon it will start effecting his all over health.” Ya, doc, I know it. But have you ever lived with a stubborn schnauzer who wants his treat when he wants it? Walking him more sounds easy, doesn’t it, except Levi won’t go out in the rain and I won’t go out in snowy or icy weather. I used let him run in the back yard on a long clothesline but my back lot line neighbor acquired three pit bulls two years ago and only one is chained up---presumably the one that has already killed a cat and attacked another neighbor’s dog. But Levi didn’t get the ‘diet talk’ this year because he actually lost his two pounds and now I’m mad at the little bugger for not sharing his weight loss secret with me.

This routine appointment drained $452.43 out of my check book for all his shots/vaccines including two required for licensing, a canine flu shot, CBC blood work, fecal check, ear infection treatment, three months’ worth of flea, tick and heart worm meds and apoquel pills for itchiness when he needs it for a plugged saliva gland. On the good side, this was the first time in three years his teeth didn’t need cleaning but they aren’t going to let that money get away. They want to re-check his teeth in October and I will let them because he can’t afford to lose any more teeth to gum disease. And I'm taking bets on whether or not his CBC blood work will turn something up they'll want to treat. He's a senior citizen now and those years turns us all into cha-ching machines for the medical communities.

The month of May also brings my yearly eye doctor appointment. My eyes are tired and bother me from the minute I get up to the minute I go to bed but the doctor keeps telling me eyes are healthy and my sight hasn’t changed enough to bother getting a new prescription in three years. And my cataracts aren’t big enough---yet---for him to want to remove them. “Artificial tears,” he says, “use them up to 20 times a day.” I asked if they have a car service for cataract surgeries like the slick, new eye surgery ‘assembly line’ in town advertises. Not having any children who are obligated by love or guilt to help with transportation to and from cataract surgery is a huge concern for me. The eye doctor said there is a service in town that will pick you up, stay with you and bring you back home for any medical procedure. "Costs a royal fortunate," he said, "but it’s an option to file away in your back pocket." You can’t just call an Uber or Lyft for rides to medical procedures because they require that you have someone in the waiting room in case of emergencies. I guess having a total stranger you just met two hours ago qualities.

Have you warmed up to using Uber or Lyft? We spent our childhoods being warned about getting into cars with strangers and the only time I ever did it I got raped so now I’m supposed to unlearn all those warning that were drilled into us growing up? Granted, no one is going to want to do bodily harm to an pudgy old woman in sensible shoes…unless they're working as a ‘body procurer’ for a modern-day Leonardo da Vinci. Did you know he dissected bodies in the dead of night to learn human anatomy? He started out paying grave robbers to supply him but when they got caught taking a shortcut and helping a vagrant into the next world, his new 'body procurers' would get unclaimed bodies from the city until Leonardo finally worked his way up to getting a doctor at a hospital to give him access to cadavers. Anyway, back on topic. A few years ago I thought I was ready to try Uber when my arm was in a sling then an Uber driver in a town near-by killed six people and wounded two others and in between him shooting random people he was picking up Uber customers! At least with the medical patient courier service my eye doctor told me about I have to believe they go through a thorough screening. If not, don’t tell me. Let me live in blissful ignorance because the odds are good I may need their service someday.

I’ve turned into a quirky little creature, haven’t I. I’m afraid of my back yard, of dying in a car accident, of falling on the ice, of Italian Renaissance Era body snatchers and a hundred perfectly normal 21st century activities like wearing sleeveless blouses, roller coasters and people who dress up like zombies. Not that I was ever a fearless person in my prime. I never jumped off a dock head first, for example, without knowing how deep the water was. I refused to go sky diving in my 20s or to sit in the front row at the stock car races and I’m pretty sure my scary-cat persona was the reason the guy I was dating at the time broke up with me. But I’ll tell you what I’m not afraid of doing that most of my Gathering Girls pals won’t do. They won’t answer their front doors if someone rings their doorbell. Who’s the scary cat now?  ©
Posted by Misadventures of Widowhood at 7:16 AM