Just Shoot me the Next Time This Happens 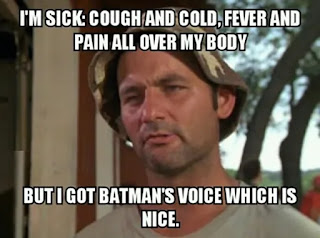 I’m not good at being sick. It doesn’t happen often so I don’t have a lot of practice at suffering in silence while hacking up my lungs, coughing so hard I peed my pants an embarrassing number of times. I thought I’d broken some ribs in the process like my mom did once. I was so worried about what was trying to come up from my lungs that I got out the pink ‘vomit dishes’---left over from various hospital stays---and staged them all over the house. I felt nauseated, too, but I never upchucked and while the cough was the wickedly deep, hacking and rumbling kind it never brought up bowels of the devil like I thought it would. Still, my rib cage hurt like it was on fire and I couldn’t take a deep breath without pain. Luckily I still had my winter cold and flu supplies on hand and I put on so much medicated chest rub that I smelled like a camphor factory. Then I took a Coricidin Chest Congestion and Cough Liqui Gel and went to bed at 7:00 Thursday night, thinking in the morning I’d go to the med center. By morning, my temperature was 99.9. Better, so I nixed the med center idea.

Spoiled Levi, no matter what happens to me he doesn’t have a sympathetic bone in his body. As sick as I was over the weekend he still demanded that I feed and water him, get him treats and let him outside and back in again---all on his schedule. Even begging him to leave me alone didn’t help. At one point he wanted me in the kitchen. It was his emergency-don’t-ignore-me bark. Did I leave the stove on and the place was on fire? No, I wasn’t eating or cooking. Was Timmy down in a well again and needed help? Finally I threw off the two blankets that weren’t keeping me warm. Go Lassie, lead the way! It was pretty clear Levi had been having a good time without me. His first-tier toys were strewed all over the house and his second-tier toys had been tossed in a pile like rib bones at a barbecue. In the kitchen, Levi sat down by his food dish and barked, “Look at this disgusting mess!” I did. Twice before I figured out the problem. His kibble had been invaded by black ants the size of pepper grains. How did they do that, get all the way inside the house to find his dinner? It’s such a long trip you’d think they’d die of old age before getting there.

I’ve never lived without a dog in my life and Levi is the first one who wouldn’t cuddle with whoever was sick in the house, staying in bed with them or nearby on the floor, for as long as it took to get them well again. That page was missing in Levi’s handbook on how to be a good dog. Maybe that’s because he came into the family after Don’s stroke and Don needed a lot of naps. Maybe Levi took one look at that situation and thought, Five minutes of sympathy is all I’m giving him a day. Having a ‘sick human’ was his norm and for an active, twelve week old puppy when he was adopted, five minutes was a long time to be in healing-the-sick mode. At least Don got five minutes. I have to bribe Levi with Milk-Bonz Trail Mix mini bones to get him to sit next to me for three minutes. Yes, my nose is out of joint. When you’re sick you want a little canine sympathy. Or is it just me?

Friday and Saturday I rarely left the bedroom. By Sunday night I got out of bed, still wearing the nightgown I’d been wearing since Thursday to sit in the living room to watch American Idol. That’s when Levi decided to vomit next to my chair. I cleaned it up and no more than sat back down when he upchucked again. A total of four times before he was finished and then he put himself to bed for the rest of the evening. I guessed his stomach didn’t like the chicken soup I mixed with his kibble or maybe it was the germs he got from shredding Kleenex that he stole out of my bathrobe pockets or maybe he ate some of the ants before he saw the “pepper” was moving around. At least he hung his head in shame after parking his vomit at my feet and I told him that it was okay. No sense having two in the house who wanted and didn’t get any sympathy.

Monday I was hoping I was well enough to go to my dentist appointment but I canceled because I wouldn’t want to stick my fingers into a mouth that was sure to still have a bunch of yucky germs inside and I wasn’t positive I could even keep my mouth open a whole hour or drive as far as I’d have to drive in the rain to get there without falling asleep at the wheel. I did, however, pronounce myself past the contagious stage. I still had a cough but most of the rib cage pain was gone and my temperature was 98.0. But that morning I woke up with my nightgown soaked in sweat---where did that come from?---so I took a shower in case Prince Charming should show up on my doorstep. I filled an ice cube tray up with canned pumpkin puree for Levi’s tummy and did a thorough cleaning of the ant area. By one o'clock I needed a nap and do you know what that twit of a dog did? Without so much as an invitation or the bribe it usually takes he crawled up in bed and took a nap at my feet. ©
Posted by Misadventures of Widowhood at 12:30 AM