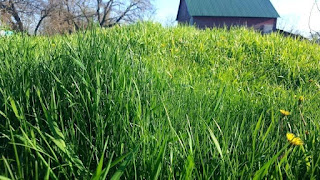 Who would have thought after living in a house for eighteen years and having a great lawn care company go out of business that I’d have a hard time finding another. Other years they’ve flooded my mailbox with fliers and I started looking for them by mid-February. None showed up. Finally, I did an internet search of lawn care services in the area, called all seven listed but none were taking new customers. One big company that’s been around forever would take me if I was willing to pay a surcharge the first year bringing the weekly cuts up from an estimated $40 a week to $65. “But then the following year you’d be in our system and the price would drop back down. That’s just for the cuts,” she went on, “the weed and feed treatments are extra.”

I don’t need the weed and feed, I told her, “l’ve already contracted for that.” You would have thought I said I contracted a hit-man to kill the postman. “You can’t do that!” she said with great indignation. ”They need to be tied to your cuts.” She was such a snippy know it-all that I had a hard time not hanging up on her but I hadn’t decided, yet, if I’d have to let her extort a surcharge out of me. I was running out of options so I politely told her I’ve been contracting feed and weed separately for eighteen years and it’s always worked out fine. I didn’t tell her my weed and feed company uses all organic-based, earth friendly products, the only company in the area that does and if I’m going to pay extra for a service, I’d pick them every time. Weed, feed and bug control is their only business---not a cheap service either---and they run fifty trucks. Obviously, I’m not the only one who commits the Cardinal Sin of not tying weed and feed treatments in with their mowing. How gullible does she think people are?

It must have been a slow day at the office because ‘chatty’ seemed to be her default mode. She asked who I’d been using for lawn care. I told her and before she could badmouth him, I added that he is also my nephew and he went out of business. She said the reason everyone is full already is because six companies in town did the same thing. “We know everyone,” she says, and “no one is taking new clients.” Clients? Lawyers have ‘clients’ people who cut grass have ‘customers.’ Then she goes on to say that the remaining companies all got together in February “to kind of set the prices”---OOPS! It was almost fun listening to her backpedal on price fixing. She rushed to explain how low bid people always go out of business after bleeding their customers away and I said, “Ya, I know all about low bids. We were in the commercial snowplowing business for decades.” And while she was sucking on that tidbit of information I took the opportunity to ask again, “Are you sure you don’t know anyone who is still writing contracts?” She gave me a phone number.

I was almost afraid to take a recommendation from Ms. Know-it-All who talks-too-much but I called and within two hours a laid-back guy came over, walked the yard, gave me a price and as we talked I felt comfortable enough to write him a check for half the season. It seems he plows snow in the winter for Chatty Know-it-All's company and they tried to subcontract him to mow this summer. He turned them down but told them: “If you want to throw me a bone, I can handle a couple more lawns.” So now the surcharge makes sense. If this big company can subcontract guys like him who have their own small companies, they could collect the extra money to do the billing, then poach the customer away from the subcontractor the following year with no one being the wiser as to who really did the actual work.

My sister-in-law who passed away a couple of years ago used to say she was ready to go to a nursing home because it was too hard to keep her yard up. And at the time I didn’t understand why anyone would say that. “What’s the big deal?” I’d ask. “All we do is make a few phone calls and write a few checks.” If I could, I’d go back and tell her I’m sorry I didn’t understand why her lawn care was wearing her down. I was stressed out this year thinking I’d be living in a hay field with township violation notices decorating my front door like mini flags waving along a parade route. Heck, I'll be stressed out until the new guy shows up to do the first cut of the season. He is doing my cuts for a bargain rate of $30 a week so when I'm finished worrying about him taking my check and disappearing off the earth, I'll start worrying about him being so cheap he’ll let me down before fall. He looks like a guy who loves his sweets so I might have to start baking on Thursdays to keep him happy and make him feel guilty if he even thinks about stranding an elderly woman before the season is over. ©
Posted by Misadventures of Widowhood at 12:30 AM