From Memorial Day to the Bachelorette Season 15 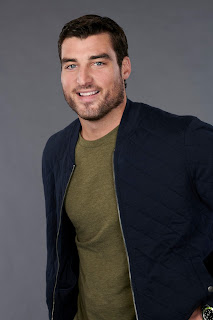 A few years ago I wrote a Memorial Day post and in it I said, “From personal experience I know that raw grief dissipates over time, but a tiny piece of my heart also goes back to grief from time to time in the form of wistfulness for what might have been.” I’ve been feeling a lot of wistfulness the past few months and I can’t decide if t comes from watching too many Hallmark Movies or if I’m watching them because I’m wistful. I miss love! I miss eye contact and hugs and the kind of conversations that happen without words because you’ve known the other person so long you can read each other like books. Your gestures, your body language, and the way your eyes turn different colors when you are happy or mad or sad. You can’t fool someone who has known and loved you for years. Sure, Hallmark Movies are formula driven but one could argue that actually falling in love and maintaining that love for years, is formula driven, too.

Speaking of formula TV, let’s talk about the new season 15 of the Bachelorette with Hannah, the former Miss Alabama. She started out with 30 guys to pick from and on the second show she had them in speedos walking a pageant runway. Do women these days really pick out their life partners by the size of their packages? In her case, it might be true. She sure has been doing a shocking amount of the full-body making out for so early in the show. I have a love/hate relationship with the Bachelorette and Bachelor franchises. They and American Idol are the only reality TV shows I watch and every year I say I’m not getting caught up in the “B” shows. But half the time, I still do. Maybe I'm pretending I get to pick from the 30 guys and, trust me, this season I wouldn’t have ANY trouble knocking 8-10 out of the running because of their “careers.” What is a ‘car bid spotter’ for example or a ‘roller boy’? The ‘pro-surfer’ plus the unemployed guys would be out the door by the second rose ceremony as well as the guy who just professed that he’s "already falling in love" with Hannah and “you can trust me.”

If I was to wake up tomorrow young and beautiful like Hannah and was in her place, I’d make quick work of that show. It would have ended already because I’d pick 28 year old Tyler G., a psychology graduate student working towards getting his PhD in psychology to become a clinical psychologist. He has a side business in Dream Therapy Analysis and you know how much I like my dreams. All these guys have profiles on the Network’s fan page and his reads: “Tyler G. is a very laid-back guy with a go-with-the-flow kind of attitude. He avoids clubs at all costs and would much rather spend time reading, going to Soul Cycle or relaxing on his boat. Tyler considers himself a modern romantic and is looking for his equal match, who he says is a confident girl that isn't afraid to lay it all out on the table and is one that can make him laugh.”

But Hannah eliminated him this week, on the third show, because behind the scenes he was accused on a message board by a high school girlfriend of being "extremely misogynist" which just goes to show I make bad decisions based on first impressions and/or in this age of social media teenagers can never outgrow their past miss-behaviors. Hannah, however, kept the psycho-stalker last night when she threw Tyler to the curb. Go figure. There’s always a psycho-stalker type on these shows. A woman or man who cuts into other people’s time and who stirs up trouble because psycho-stalker can’t play fair in the sandbox. Am I invested in this waste-of-time show or what? And it's only week three!

I would argue that show (and Hallmark Movies) are not really a waste of my time. It’s a mindless diversion from watching too many political shows. It’s an opportunity once a week to throw popcorn at the TV screen (which the dog cleans up) and to remember what it was like on the dating scene before I met my husband. Not that the show is anything like clubbing was back in the ‘60s but reading the body language of these guys and trying to figure out if they are handing Hannah a line or if the producers are manipulating everything, or not, keeps me watching. She graduated magna cum laude with a degree in communications, she’s not stupid but Hannah sure seems too shallow at times. Her platform for her year as Miss Alabama was to “advocate for those suffering from depression and anxiety, something she battled with during her teenage years.” I once dated three guys at the same time and that filled me with anxiety and she’s trying to ‘date 30 guys at once? Nothing like jumping feet first into an active volcano.

Back to Memorial Day. It snuck up on me. The weather has been too cold to think about the beginning of summer which this holiday weekend usually signals. Or maybe that’s just an excuse for wanting to avoid going to the cemetery. I was there a month or two ago and it needs work, sod was taking over the stone. But I wasn’t exaggerating about feeling a lot of wistfulness and I’m not sure I want to pair that wistfulness with spending time digging up sod around Don’s grave marker. I’ll go but I want to do it on a nice, warm sunny day and if that warm day doesn’t come until July? I’ll probably not be able to find the darn stone! ©
Posted by Misadventures of Widowhood at 12:30 AM